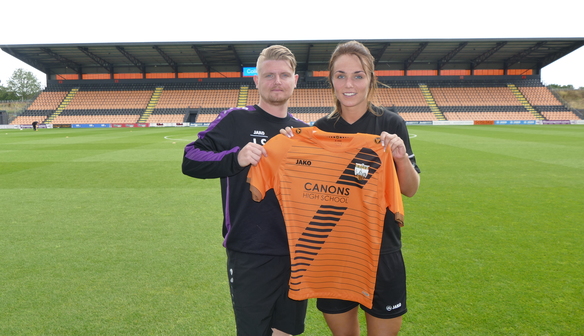 London Bees have made their first signing of the summer in defender Rosie Lane, who joins from Oxford United.

“When I left Oxford, I had no plans in place, but after speaking to Luke [Swiundlehurst] about the club’s ambitions for next season, looking around at the facilities and being involved in the training, I knew I wanted to sign for the next season, Lane told londonbeeswsl.com.

“I needed a new challenge and I am really excited to get things going with the friendlies lined up ready for the season to start on the 23rd September.

“I’ve been impressed with a lot at the club so far. The facilities at The Hive are excellent and I really like that everything is in one place. I’ve also been really impressed with the training from the type of sessions put on and the standard here.

“It’s exciting for me signing for a new club. It’s only a couple of weeks into pre-season and it’s looking very positive in training already. In 8 weeks time when the season starts, we will be more than ready to really kick on.”

Head coach Luke Swindlehurst said of his new signing: “She’s a strong defender and works very hard for the team which is a very important attribute. She also has the right mentality and personality that fits in with our own philosophy at the club.”

London Bees have signed defender Danielle Lea, formerly of AFC Fylde, and she made her debut for at Durham on Sunday. An ACL injury forced her to miss the whole of the 2014 season, but the […]

FA Women’s Championship side, London Bees have confirmed that they have parted company with manager Lee Burch.  Burch joined the Bees in the summer of 2019, guiding the club to a fifth-place finish in the […]

Defender Ellie Wilson, 21, joins London Bees as she makes the move from Bristol City. Wilson said of her switch: “Changing club brings new challenges but it also brings new opportunities so for me it’s about […]