Last Thursday, media were invited to a ‘meet and greet’ at Wembley with the new England women’s manager Sarina Wiegman. Her tenure had started on 1st September and she had attended a few live games and also selected her first squad for the upcoming World Cup qualifiers before that ‘gruelling’ (partly tongue-in-cheek) afternoon of enduring our company and questions.

After an informal half hour or so where she floated serenely from group to group for elbow-bumping introductions and friendly chitchat over a coffee, she was escorted pitch side to face a succession of broadcast interviews (you will have undoubtedly seen some of the footage) before being brought back up to the dozen or so written media journalists who had finished off the sarnies and biccies, whilst waiting for their first opportunity for a roundtable conversation with the Lionesses’ new boss. 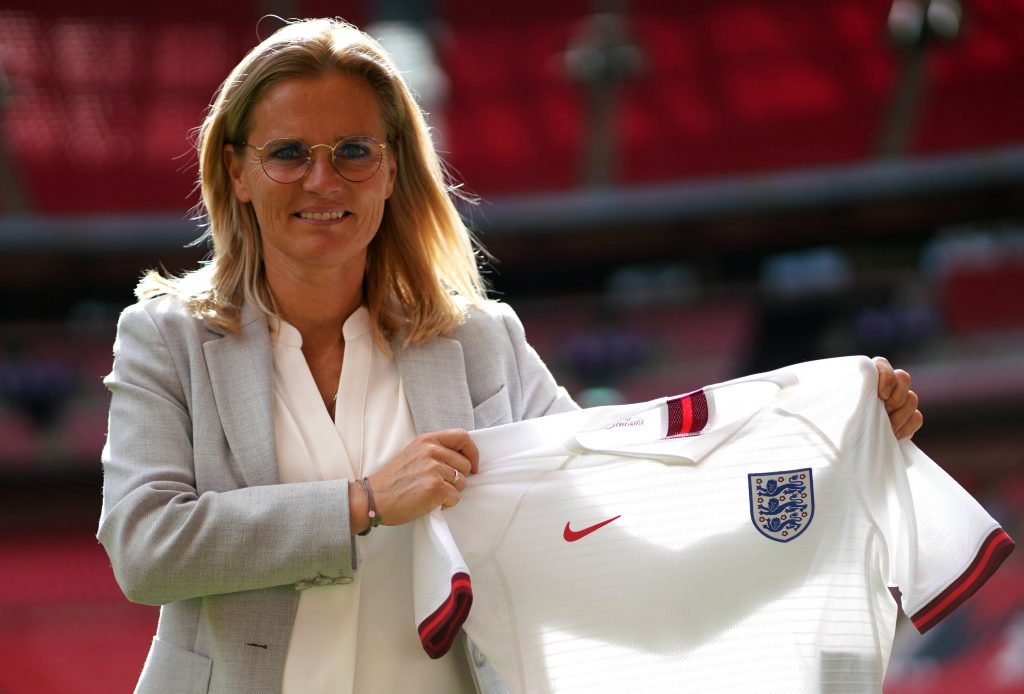 Perhaps it is simply her natural demeanour, the Dutch trait of honesty [yes we are stereotyping and generalising but hopefully not unfairly], or the fact that she does not have to ‘prove’ herself in terms of her previous experience and achievements (who else in the world could say they have literally ‘been there and done that AND won that’?), but a calm confidence and clarity of vision prevailed.

Of course, there is much work to be done and time is limited before the massive job of leading a team into a home Euros, she hadn’t even met any of the players yet, that was happening today [Monday] – but the gathered hacks were universally impressed.

We had a mag to get away (TYPICAL TIMING!) and part of the discussion was also embargoed, so you will perhaps have read/heard some of Sarina’s thoughts and responses already but as ever, we wanted to share, on the record, some of what England’s new manager had to say…

On being at Wembley:
This is impressive. I’ve been here before one time. I came here for a cup final which Arsenal women played [Chelsea] in to watch the Dutch players. And I was here in ’96 for the Euros to watch the Netherlands. I think it was against England and we lost 1-4.

On her impression of English football:
I think it developed very well. I saw games last year and I watched Arsenal v Chelsea live and other games too. It’s all about wanting to have the ball, wanting to have possession, break through the lines, have depth and again be calm even under pressure and I really like that. And, of course you have to defend too when you’re out of possession. They [teams] want to be dominant. Which is good players get exposed to that, because that’s how I would like to play.

On the challenge of taking England to the next step, past semi-finals and into finals and winning:
Of course, it’s a hard step. It’s very ambitious and very challenging too but when you work in this environment, you want challenges and you know that there are expectations and you expect from yourself too.
We also know that the competition, with the Euros coming up, the development of the game is going so fast everywhere – in England, but also, for example, in Spain.

On taking the England job and leaving the Netherlands role:
I’ve played in the U.S. but otherwise I’ve played and coached in the Netherlands my whole life and you know, you’re not going to be the coach of a team for the rest of your life. There comes a time that you should change. And this came up because I was with the national team for such a long time and you start to realise, okay, what’s next? What would you like? And then you need to get the opportunities too of course, so then, then I got in contact with Sue Campbell, and I got really excited. Okay. Then I need to think about it. So I took some time to think about it. And I got even more excited and she triggered me because you know, it’s such a big country, such a big football country with a huge history, with great competition, with great potential players. They’re always in the top of the ranking and I thought this is a challenge, I really want to take it.

On the attraction of the home Euros in taking the position:
That’s something extra. What triggered me the most was working with the best of the world, in environments like this, with one of the biggest federations of the world, with the growth of the game. The English or ahead of the Dutch. The development in the Netherlands was huge too but this is one step ahead. Also the competition now, the commercial parties and the visibility on TV – it’s growing so fast, and it gives opportunities for players and I would like to contribute to that and I will do my very best to be successful.

On being aware of the pressures and the expectations:
Absolutely, I am aware and actually that changed in the Netherlands too, you know from not expecting anything to being European Champions and then everyone expecting you to be World Champions too. So you just need to be aware of that. I know what I want, I know what my vision is. You work with a staff team and if we work really well and communicate, know what our plan is and keep following the strategy you think can make you successful.
I’m thinking of growth. Because if we become better, then the chance of winning is greater. And yes, we want results.

On what comes next with the players:
Now we have the team I need to know the players even better to know what the strengths of the team are, what are the strengths of the different individuals, what can someone bring? And how can you help them to you have weaknesses to eliminate or to cover the weaknesses.
I also then need to know what’s best for the team at this moment, what fits best for this team, and also related to which opponent we face. When we play the World Cup qualification, you know we should win. When we play Luxembourg you should win and with a lot of goals but when you go into the Euros, they’re totally different opponents, which asks different things of us. So then we need to prepare a little differently to bring our strengths and cover our weaknesses and open up their weaknesses and harm their weaknesses. So you have your vision of how you want to play, but you also relate that to the opponent you play against.

On the relative lack of time and very few training camps before a major tournament:
That’s part of being the manager of a country. And it is different because now you only have like six international periods before the Euros start. But I approach it knowing you have those six FIFA windows and within those six windows you just need to do it. The players play at their club teams, and most of them they do hear similar things and we will add things to it. They’re good players, they have been playing football their whole life and for top level club teams, so it’s not like they’re coming in and don’t know anything. What we need to do is bring them together and just add some things in the way that I like to play, and with the staff and give clarity on that. And yes we don’t have very much time to train but still we have to do it in that in that time. So that’s how we will plan it.

On the World Cup qualifying fixtures coming up and how they potentially affect planning and preparation for next summer:
Yeah, that’s too bad. Of course, we have the February periods, when we can have good games, and hopefully in preparation for the Euros we have some good games but we also have some games in which we will have the ball most of the time and will be in the opponents’ half of the fields most of the time. Which will be different than when you play some countries in the Euros.

On who will be biggest threats at the Euros:
I think the the level of the countries in Europe has become so, so high. It’s such a competitive tournament, that it’s hard to say now. You want to go there with the best players and every country wants that… but who do you have and do you have everyone fit? And you don’t know now. So it’s hard to say but lots of countries are very good. Spain is growing very much, Netherlands are European Champions, Germany is very strong, Sweden they’ve done really well. So it’s going to be really exciting, especially for the neutral fans.

On how difficult it was to leave all that has been done in developing the successful Netherlands side:
In the beginning, it was difficult, because of course I’m a Dutch citizen and I’ve grown up and lived through the whole development of football. I started as a six-year-old and so I grew and lived the whole development but this triggered me and as I said, you can’t stay manager of a team – especially not in these times – for years and years, so there’s a time to come and a time to go. I think this was a really good moment, with an absolutely great challenge to come here.

On how she has changed or matured as a manager since she first took the job with the Netherlands as the head coach:
Well, my work changed too. Before the Euros in 2017, there wasn’t any visibility and the game grew so much, and especially the expectations and the media and all the expertise that came into the staff. So actually my role as coach on the pitch, developed into being more a manager – being involved in the content, but not as much in the execution, being more observational. This is okay because there’s so much expertise in the staff, and you want to use the expertise. So you know, you want players to be the best they can be, but you also want your staff members to be the best they can be, because then you all grow, and everyone then has contributed to the results. That gives me energy too.

Steph Houghton has sustained an injury to her right knee and will be undergoing surgery this week to treat it, reports TheFA.com. The England captain will miss the 2019 FIFA Women’s World Cup qualifier against […]

England Women’s head coach Phil Neville has injected youth into his squad for the forthcoming SheBelieves Cup, as they look to retain their title next month. The Lionesses will face 2019 FIFA Women’s World Cup […]

England’s preparations for the 2019 FIFA Women’s World Cup will include four home internationals to be played across the country, with kids’ tickets for each game priced at just £1. Phil Neville’s squad will continue […]