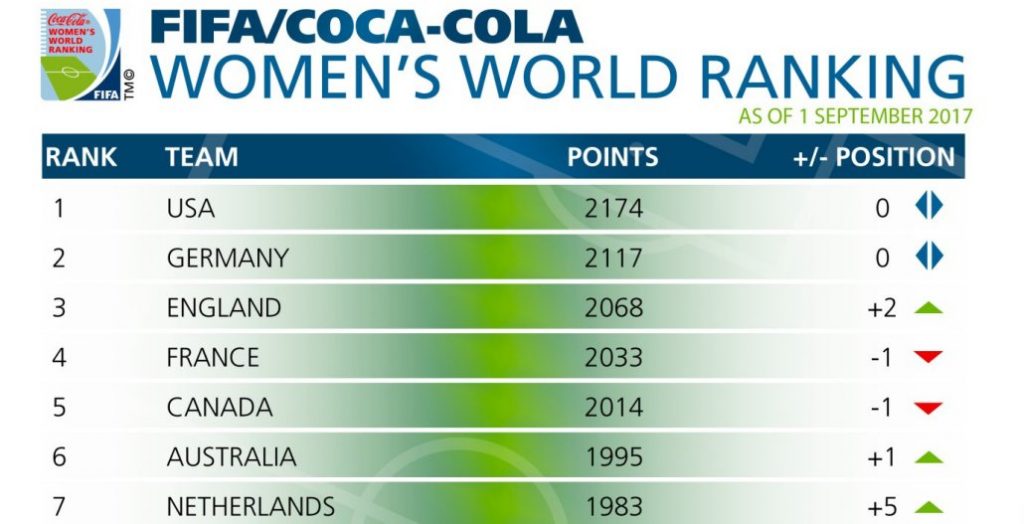 While glory on home soil has already brought joy to Dutch fans, a leap up the standings for the Oranje (7th, up 5) has added to that, reaching the top ten for the first time to claim a best-ever rank. The latter feat was matched by England (3rd, up 2) after reaching the final four.

Austria’s (20th, up 4) debut semi-final finish also saw them climb to their best placing to date. Denmark (12th, up 3) and Portugal (34th, up 4) both enjoyed gains, with the former’s surprise silver helping them climb eight places in the space of a year. Meanwhile, Germany’s (2nd, unchanged) elimination at the last eight, having won the previous six editions, sees their point tally fall to an all-time low of 2,077.

Away from Europe, USA’s (1st, unchanged) total of 2,104 points is similarly their lowest ever, while impressive wins over Japan (8th, down 2) and Brazil (9th, down 1) for Australia (6th, up 1) leaves them just 18 points shy of England.

Scotland slip one spot to 22nd, Republic of Ireland remain 33rd, Wales are down one to 36 and Northern Ireland stay 60th.

The next FIFA/Coca-Cola Women’s World Ranking will be published on 15 December 2017.

Phil Neville has named his England Women’s squad for the forthcoming August and September friendlies against Belgium and Norway. The 25-player squad will meet up at St. George’s Park next week for the first time […]

Another French Exam For Lionesses

England will travel to Valenciennes to play France at Stade du Hainaut on Friday 20 October (8pm BST KO). The two teams last faced each other in this summer’s Euros, with England winning 1-0 thanks to a […]