“You like football?” asks the officer at French border control in St Malo port. Already not quite what I was expecting. “I am a world champion,” I am informed, having answered to the affirmative. Having just spent all night on a cross-channel ferry without much sleep I wasn’t really sure how to answer this, but I managed an, “Oh, well done” which obviously pleased him enough as I was allowed to proceed into France. The chalkboard at my hotel in Rennes later that day reading ‘Champions du monde’ reminded me France had won some men’s football competition or other a few weeks ago, which explained the officer’s comment.

So here we are, the FIFA Under-20s Women’s World Cup, from a fan’s perspective. Having attended the senior Euros in the Netherlands last year, ten days in Brittany seemed the logical next holiday, but I wasn’t really sure what to expect from an Under-20s tournament. So, let’s find out!

England’s three group games are based in Dinan and St Malo but I’ll be based in Rennes for much of the tournament, mainly as a result of cheaper hotel prices in the bigger city. Rennes is also the base for the England camp for much of the tournament, however, and what should I find when taking a stroll out yesterday afternoon but two large coaches with England and Mexico written on the side of them parked outside a hotel round the corner from mine. I do love me a tournament coach for some bizarre reason! (You’re not alone, I’m always taking photos of them too, for some reason! ??– SK Editor) 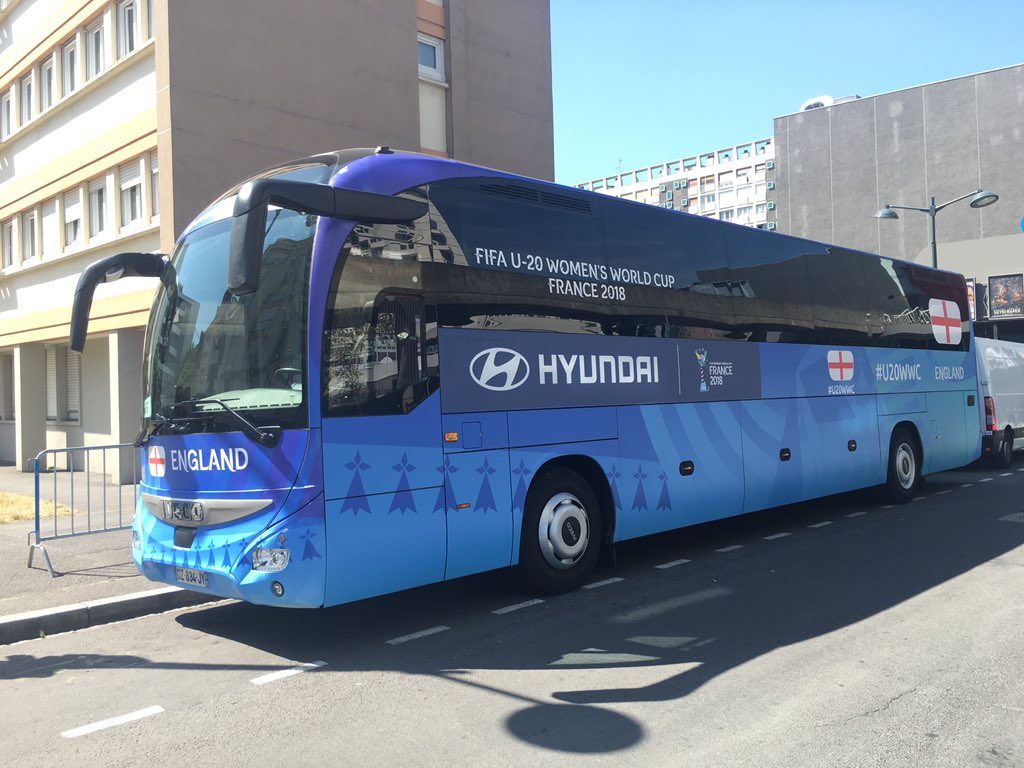 Match day one brought the trip up to Dinan, part-way between St Malo and Rennes down a small branch line on the train. Already it’s obvious that the region is embracing the tournament as much as you could hope and Dinan in particular as a host city, with a small information desk set up inside the station booking office offering maps of and to the stadium. Nothing major but a nice touch. 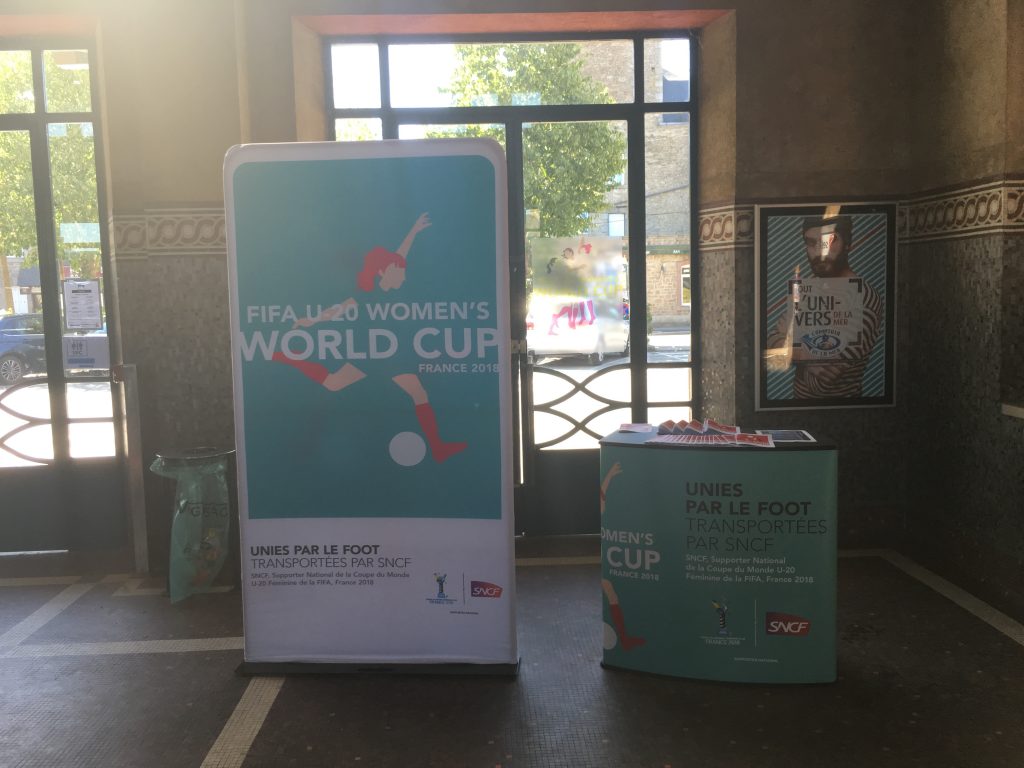 In Dinan itself there are plenty of banners around advertising the tournament including a large one from the town hall in the centre which is really fantastic to see. A short time in Dinan has proved it to be the most amazing little town, but I’ll be back later in the week so more on that then! 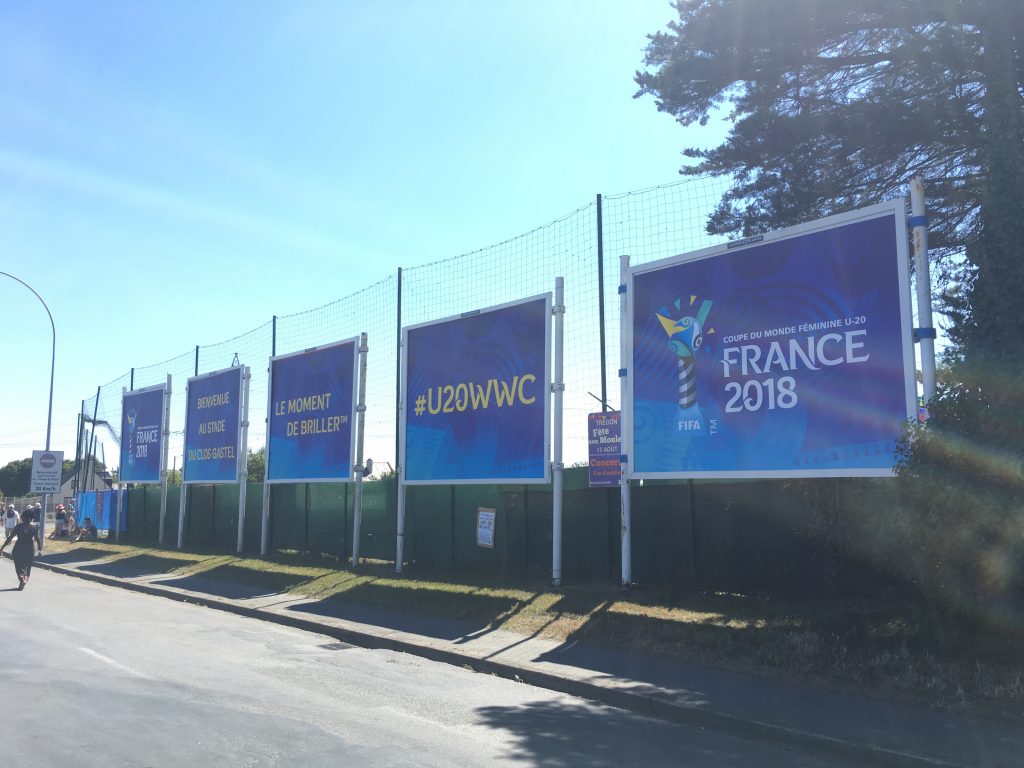 On to the stadium, located a mile and a bit outside Dinan and a pleasant enough walk, especially in the weather we’re currently experiencing. A ticket to a game day costs either €10 or €20 depending on where you want to sit but you get both matches which are played back-to-back for that, so plenty for your money.

The ground itself is a nice little complex with one stand on the main side and a temporary, uncovered construction on the other which would be home to most of the England fans in attendance. Each ticket is allocated a seat number but with the stadium not full and a number of fans only coming to see their team there were plenty of spaces to take your pick, and so I settled in for the day’s first game as Mexico took on Brazil in the blazing afternoon sunshine.

An entertaining encounter sprung the tournament into life early with a goal a piece in the initial exchanges and plenty of good open and flowing play. With the referee having let much go throughout the game a 97th minute Brazilian penalty was perhaps unexpected, as was the resulting spot kick rattling back off the post. The passionate response to the final whistle and a three two win from the Mexicans showed what it meant to them, and both sides should be a tough test for England in the next two group matches. 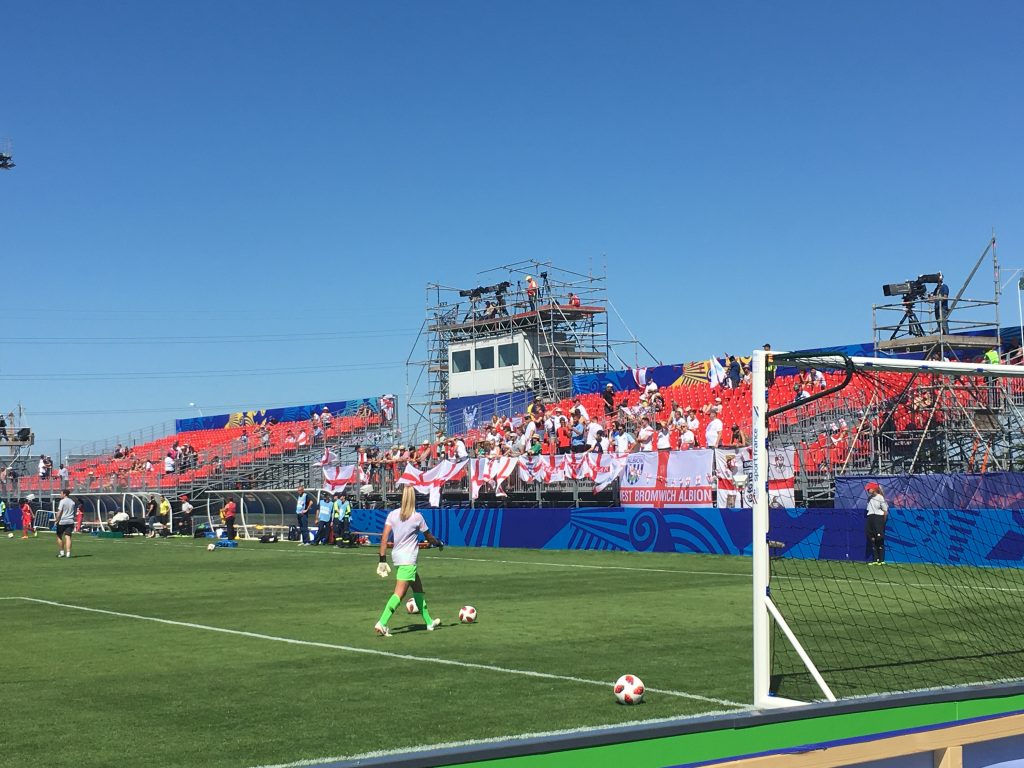 On to the main event of the day then and the amassed England fans had organised ourselves together into a section behind the England dugout for maximum vocal effect. And what an effect it was as well! The majority of the England supporters here are friends and family of the players so it was a very friendly and welcoming stand. It was great to see shirts dotted around with the players’ names on the back as well as a couple of knights who were perhaps regretting their decision given the heat! (One was Megan Finnigan’s dad, see the ace tweet below – SK Ed.) No shortage of singing throughout either, contributing to a great atmosphere and all helped by Alessia Russo opening the scoring in the first half. Goals from Georgia Stanway and Russo again in the second half ensuring the atmosphere remained buoyant. It was a great and really positive performance from everyone in the squad and they got the reception they thoroughly deserved at the end.

Support was unreal today too. Loved having my fam there – even if my Dad was dressed like this ?❤️ pic.twitter.com/rc6osNkIrm 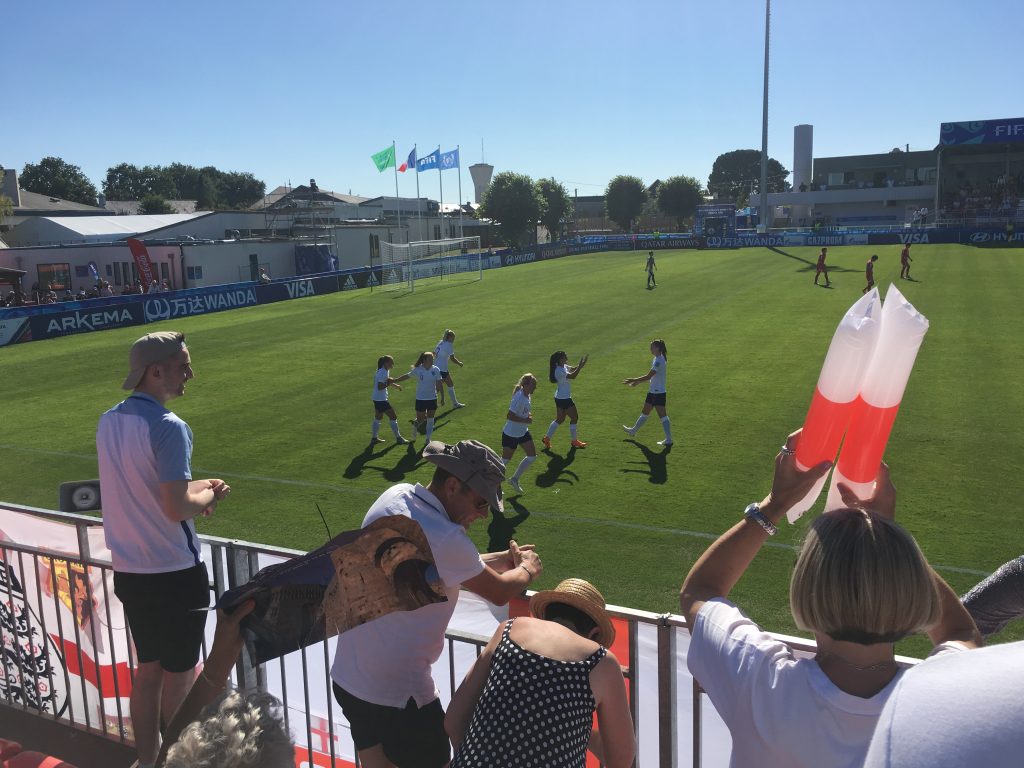 As the players went off Mo Marley shouted up to the fans that they would be back out as soon as they’d had a drink and sure enough out the players came to see their families. It was lovely to see the girls all getting such freedom to mingle with their families and spend time with them despite being in the tournament bubble which no doubt helped them relax into life over here even further as well as giving the families some pictures that will be treasured for a long time.

Back to Dinan to do it all again on Wednesday for England then, to take on Brazil who will be fighting for their place in the competition after that defeat today. In the mean time it’s on to St Malo for me tomorrow to take in the day’s two games as Nigeria play Germany and Haiti take on China. Did I mention it was hot today? Apparently it’s going to be even hotter tomorrow! I might need some more suncream fairly soon…