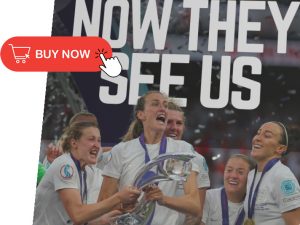 Please don’t tell anybody else but our latest issue (#75) is something very special.

We have put together a review of England becoming Champions of Europe, full of photos and posters and snippets of what the players had to say along the road to making history.

OK, there’s some other stuff too, as the new season gets underway. Also featured are:

Alternatively take out an Annual Subscription for only £25.

By way of thanking She Kicks’ subscribers for their continued support we are keeping the cost of a subscription at the usual price of £25 for 6 issues so if it’s issue #75 you’re after you can get your hands on what we think will be our best-ever issue without paying the extra!

Subscribing today is the best way to ensure you don’t miss the very special issue #75 (we’re sure to sell out!).

Never bought or read She Kicks before? You can preview the first 12 pages of #SK74 to get a taste for the mag, by taking a look at the digital issue here.

Wales were 4-0 winners over the Faroe Islands in the UEFA Women’s European Championship Qualifying Group C. Helen Ward opened the scoring at Rodney Parade on 33 minutes when put through by Jess Fishlock. Natasha […]

Wales return to action tonight with a crucial UEFA Women’s EURO qualifying group game away to Norway. The hosts have won all four of their games ahead of the 5pm (UK time) kick off at […]

Scotland are four points behind the top two sides in their UEFA Women’s EURO qualifying group, with three games left each, after a 1-0 defeat to Portugal in Lisbon. Ana Borges struck with 20 minutes […]