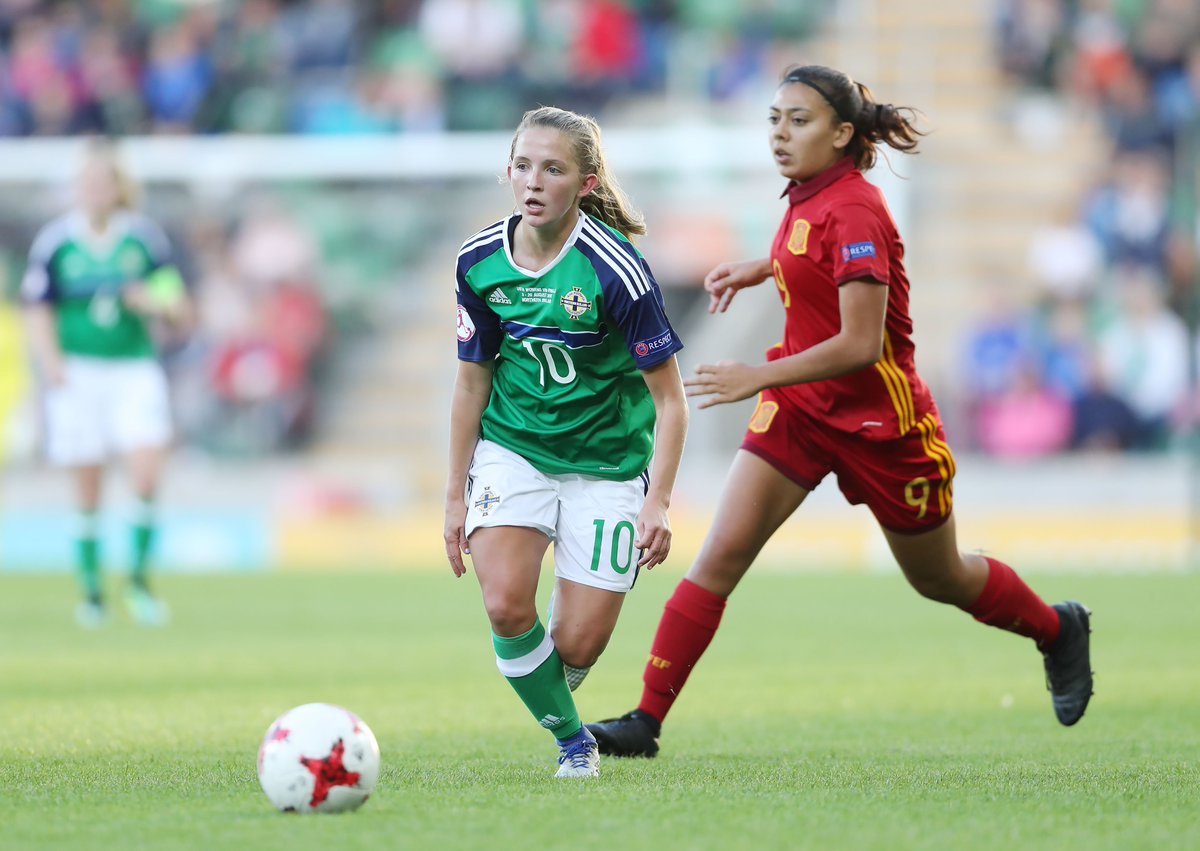 A record crowd for a women’s international in Northern Ireland of 4,289 saw the hosts go down to a 2-0 defeat against Spain, who have finished as runners-up in all the last three tournaments.

Lucia García scored her 12th goal of the campaign on the half-hour mark for a dominant Spain, after Laura Maria Perez had burst into the box.

The lead was doubled in the 53rd minute when Patricia Gujarro’s 30-yard volley flew into Lauren Perry’s top corner.

The Irish went closest to getting a goal back when Megan Bell evaded several tackles and set up Abbie Magee, whose stinging shot was palmed away by Noelia Ramos.

Germany are the early leaders in Group A, following a 3-0 victory over Scotland at Windsor Park on Tuesday afternoon.

The four-times winners took a 20th-minute lead after the Scots only half cleared a corner, Sophia Kleinherne then finding Guilia Gwinn who took a touch before finishing.

Samantha Kerr’s free-kick was gathered well by German keeper Vanessa Fischer but the advantage was extended before the break, Annalena Rieke rising highest to head home from a corner.

Ereleta Memeti came off the bench to get the third 12 minutes from time, nodding Dina Orschmann’s cross in with her first touch.

England’s Ellie Brazil on the attack against Italy (TheFA.com)

England made a winning start in Group B, edging Italy 2-1 at Mourneview Park in Lurgan, thanks to a Georgia Allan brace.

Brazil had the ball in the net but was adjudged offside, Rinsola Babjide saw her close-range attempt blocked before Mollie Rouse’s long-range effort drifted wide of the far post.

Allen’s looping header was then saved while a vital last-ditch intervention from Anna Patten prevented Gloria Marinelli from pulling the trigger.

At the start of the second half. Allen was narrowly wide after a turn and shot but she was not to be denied for long, netting on the rebound after Brazil’s initial effort was saved.

But Allen made the game safe with 15 minutes remaining, as her fine low finish from Brazil’s pass capped off a lightning-quick counter attack.

Looking to match their seniors’ victorious Euros campaign, the Netherlands began in style by beating the holders.

The Netherlands are on top of Group B following a 2-0 success over France at the Ballymena Showgrounds.

Both goals came in the first quarter of the game, with Victoria Pelova opening the scoring, before Julie Piga deflected a Quinty Sabajo free-kick into her own goal.

Next up on Friday 11th August is:

Anglo-Scottish Play Off For #FIFAU20WWC

England and Scotland failed to get through the U-19 Euro group stages but will meet on Thursday in a play off for a place at the U-20 World Cup in France next August. The Young […]

England today began their UEFA Women’s U-19 Championship Group 1 qualifiers with a 9-0 win over Malta, in which Jessica Naz scored three times. Rehanne Skinner’s side had a devastating 13-minute spell before the break, […]