Arnold Clark Cup Day Two: Another draw, this time between England and Spain while Canada defeats Germany 1-0 to go top of the leaderboard with four points (20/2/22)

So, the second day of action at the Arnold Clark Cup promised much and certainly delivered two enjoyable games, even if it remained goalless between England and Spain and only one goal separated Canada and Germany. Report by Chloe Atkins.

Home side England kicked off the soggy Sunday at Carrow Road with the first match against Spain. The consensus within the England camp ahead of this test had been summed up by Manchester United’s Ella Toone who said Spain “will be really tough,” and so pre-match anticipation was certainly high.
Sarina Wiegman’s team selection contained nine changes from line-up that faced Canada on Thursday with only Rachel Daly and Alex Greenwood keeping their spot in the starting 11, and Aston Villa’s ‘keeper Hannah Hampton received her full senior debut between the sticks. Spain had also shuffled the pack and made six changes from the draw with Germany.

The first half saw a solid display from both teams, with Spain looking calm and collected in possession with effortless technical skills while England demonstrated a strong and organised press putting the Spanish backline and Real Madrid keeper Maria Isabel Rodriguez Rivero under great pressure on occasions when they showed any weaknesses in playing out through the defence.

There was one particularly scary moment for the Lionesses in the first half when a miscommunication between Jess Carter and Hampton just outside the box resulted in a chance for Spain to shoot from range as Hampton rushed back but the shot was wide of the net. It was to be the only slight blot on the copy books of both young players, who seriously impressed against top tier opponents. 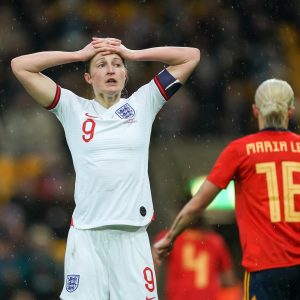 England’s best chance of the first half came from a swift combination play between Jordan Nobbs and Beth Mead who whipped across a dangerous ball but Ellen White’s header from inside the six-yard box skimmed the face of the goal and went out of bounds.

At half-time Nikita Parris made way for the hometown girl, Lauren Hemp who within 30 seconds and with almost her first touch had given the home side their best opportunity of the match. She nicked back possession with a strong tackle, drove towards the Spanish goal only to see her low, drilled, near-post shot hit the inside of post and ricochet out towards the opposite side of the box. It sent the proud crowd into a frenzy but it was ultimately the closest England would get to breaking the deadlock, although there were other nicely crafted openings.
Minutes later, Lucy Bronze played a beautiful long ball into Nobbs who raced through the backline but from a tight angle could only drag her shot across the face of the goal.

Spain too were creating but failing to convert chances although their clearest opportunity to score was down to a minor slip up in England’s backline when a defensive header by Daly failed to clear the pressure. It fell deliciously for Lucia Garcia but she miscued and sent it a yard wide of Hampton’s net.

Spain pushed hard in the remainder of the game with speedy 21-year-old Athenea del Castillo of Real Madrid causing Bronze a headache down the left side. Castillo’s contribution was recognised by ITV’s commentary team with Emma Hayes naming her  Player of the Match.
The match finished level and though the Norwich crowd were of course desperate to see an England win, both sides and coaches were clearly content with the result.
Spain’s coach Jorge Vilda: “I would be worried if we weren’t getting chances. The main objective of this tournament is to improve. Every player was more fluid and we created more chances (today) than against Germany.”
When asked to comment on the English performance he was quick to mention the “fantastic atmosphere” the fans created today. Despite the rain and wind, over 14,284 fans came to Carrow Road and generated a real buzz around the stadium in support of the Lionesses.
England’s Sarina Wiegman described her side’s performance as “mature”, adding, “We don’t win Euros today, or Wednesday but we need these games to be at the highest level.” She went on to say: “I’m really pleased that we created chances in the first and second half. It’s February and the [Euros] tournament starts in July. Players need to show now and in July.”

We leave the last word to England stopper Hampton on her reaction to her first start and a clean sheet: “It’s a dream come true for me. I don’t think the smile has come off my face since they told me.”

Quinn, Nichelle Prince and Cloé Lacasse all came in for Canada, while Desiree Scott wore the armband instead of Jessie Fleming. In contrast Germany made eight changes with only Jana Feldkamp, Klara Buhl, and Lina Magull keeping their place for their second starts of the tournament.

Despite the very small smattering of fans at the game, the dedicated Canada supporters did not lack noise when Angel City’s Vanessa Gilles headed home her first international goal from Janine Beckie’s corner in the sixth minute. Just minutes later  Gilles was involved at the other end when Germany’s players had a strong appeal for a penalty ignored when the ball appeared to strike her arm from a shot.

How did it feel to score her first international goal?  “I don’t remember it honestly!,” responded Gilles afterwards about their rare set-piece success, “But as Bev said, it’s straight from the training pitch. It’s something we wanted to achieve and now we can tick that box.”

Once in front, Canada largely dominated and looking fairly comfortable, living up to their reputation as a solidly defensive team. Germany did work up a few good opportunities but the Canucks’ centre-back pairing of Kadeisha Buchanan and Gilles made key tackles and blocked multiple shots to keep their team in the clear. Then, in added time at the end of the first half, San Diego Wave keeper Kailen Sheridan made a show-stopping save and pushed Feldkamp’s effort just inches wide of the post.

The second half remained as lively as the weather and blustery winds and did not lack controversy. Most notable was when Ann-Katrin Berger quickly put a stop to Prince’s run on the end of a beautiful curving ball through from OL Reign’s Quinn. The Chelsea keeper missed the ball and knocked the fleet-footed Prince to the ground but despite the loud protestations from the Canada dugout and astonishment throughout the press tribune the referee was unmoved. Germany also had a second handball penalty appeal turned down as they pressed for an equaliser and Canada sat deeper and deeper. In the final minutes, Player of the Match Gilles again proved instrumental in keeping the German side goalless with another major block and helped the team earn only their second-ever victory over they European opposition in 17 meetings.

“I think we have a world-class back four, incredible in both boxes,” reiterated Canada coach Bev Priestman after the final whistle. The German side put everything they could forward but Canada was too strong defensively, holding onto their early lead seeing the out the match. Meanwhile Germany’s Martina Voss-Tecklenburg reflected: “I don’t know why we lost, we showed a lot of passion and a lot of work.” Before adding, “we didn’t show the dominance we can have.” Voss-Tecklenburg also made it clear to politely point out that “the referees were not at their best”.

Canada takes on Spain at 2;30pm at Molineux on Wednesday, where Germany will then face England at 7:30 pm (LIVE on ITV4).

England were beaten 8-0 in the UEFA Women’s U-17 Championship semi-finals by a rampant Germany. John Griffiths’ side conceded three times in a seven-minute first half spell, as Germany upped their chase of a third […]

England made it three wins from three in their UEFA Women’s U-19 Championship qualifying group with a 4-0 defeat of Slovakia, having already booked their Elite Round berth. Rehanne Skinner’s side were well on their […]