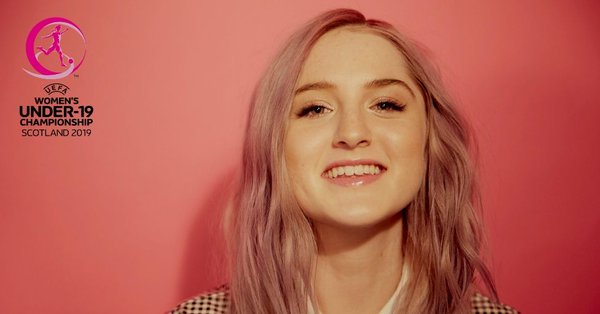 The Scottish FA have announced Be Charlotte’s song ‘Dreamers’ as the official track of the 18th UEFA Women’s U-19 Championship.

Scotland play host to the tournament for the first time between 16-28 July 2019.

Charlotte told scottishfa.co.uk: “There is such a feel-good factor around the Women’s game and I cannot wait to hear the song being played out across stadiums before the matches. The tournament is a celebration of talented young women from many different countries and I hope that my song can help inspire some more people to dream big and pursue their own dreams.”

Group matches for the tournament will take place at Forthbank Stadium, McDiarmid Park and Firhill in Glasgow, with the Final being played on Sunday, 28 July at St Mirren Park.

Scotland start their campaign against France on Tuesday 16 July with England v Germany another mouth-watering tie on the opening day of the Championship. Reigning champions Spain, aiming for a third title in a row, open their account against Belgium.

Dreamers can be heard at www.scottishfa.co.uk/wu19euro where you can also buy match tickets.

Gareth Evans has named his Scotland squad to take part in the UEFA Women’s U-19 Championships in Northern Ireland. Scotland qualified for the finals after topping their Elite Qualifying group. Scotland’s UEFA U-19 Championship Fixtures […]

Wales lost for the second time in their UEFA Women’s U-19 Championship qualifying round group, going down 3-1 to Belgium at the FFA Academy Stadium in Yerevan. They quickly fell behind to a Kaily Dhondt […]