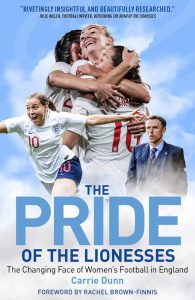 When you write a book, explains Carrie Dunn, the first question people always ask you is, “When will you write another one?”

After 2016’s The Roar of the Lionesses came out, I wasn’t planning to write another one. I was really pleased with how that book was received – and thrilled that it was named as one of the Guardian’s sports books of the year. It was a snapshot of a rapidly changing time in the women’s football landscape, and I was so glad that I was able to capture just a few of the important moments up and down the pyramid.

Two years later, the set-up for women’s football had begun to change so much, and so tumultuously, I started to think about writing a sequel. England had put in a slightly disappointing campaign at the 2017 Euros; Mark Sampson had left his job as Lionesses coach; bigger and bigger names were heading to ply their trade in the WSL; teams further and further down the pyramid were beginning to develop massive plans to develop their women’s teams. Was it all realistic and sustainable? Or was it just clever marketing talk?

The thousands of women who played football during the half-century-long ban in England got so little chance to tell their stories; and even after that, there were decades during which women and a small number of male allies were running their own game, with little help (or indeed money) from the governing bodies. As the nation’s attention turned to France, where England would go into the 2019 Women’s World Cup as one of the favourites to lift the trophy, I wanted to revisit the state of play in England – from the very top back down to grassroots, from modern day to the invisible histories. I got the chance to talk to some of today’s Lionesses, and also to those who paved the way for them – women like the newly-dubbed ‘Lost Lionesses’, who represented England at an unofficial World Cup in Mexico while the ban was still in place. I talked to the stars who powered Arsenal to the WSL title, like Beth Mead and Vivianne Miedema; I was also honoured to step behind the scenes and follow the cup-winning seasons at Leyton Orient and Barnsley.

Like ‘The Roar of the Lionesses’, ‘The Pride of the Lionesses’ is not a comprehensive account of everything that happened in English women’s football during the 2018-19 season; indeed, so much is happening so quickly it would be impossible to do. Rather, this book again provides a series of snapshots of the people and clubs at all levels of the game, showing the challenges they face, the targets for which they aim, and their ultimate achievements. Some of the players, coaches, officials and teams featured in ‘Roar’ also feature here; there are also always new stories to tell.

I hope people enjoy ‘The Pride of the Lionesses’ as much as I enjoyed writing it – if you’d like me to come and speak at an event or you’d like to host a signing and sell books at your clubhouse to raise money for your team, just get in touch and I’ll be happy to help as much as I can.

The Pride of the Lionesses

England drew 2-2 with hosts USA in front of 22,000 in Nashville but Japan lead the SheBelieves Cup table on goal-difference after beating Brazil 3-1 and finish up against the Lionesses on Tuesday. Megan Rapinoe […]

The over-riding vibe from the England camp on Saturday afternoon was, understandably, that they are not one little bit happy with the result against Brazil and are determined to change that in Portugal, on Tuesday. […]