After a fantastic overall team display (although less so in the first half, if we are honest), it was inevitable that voting for the She Kicks Player of the Match was going to be a close call and that the goalscorers would be high on the list.

Your top three, in reverse order were:

Yep, pretty amazingly, it turns out it was a tie between Beth Mead and Ellen White for top spot.

Thank you everyone who took the time to vote and to give us a steer on why they got your backing.
Here’s a selection of some of the comments you provided on the players’ and the team’s performance:

Great to see her back, natural goalscorer back in form at the right time!! (Angie)

Ellen was attacking all the time, brilliant runs and energy from her considering she’s been out injured (Helen Warwick)

Ellen was constantly fast paced, in the defence’s face. Beast of a player. (Allie)

She was always looking to be in positions that would create chances. Her pace caught defenders off guard and showed real character to play on after her injury scare. (McKenzie Darrington)

Lucy had an exceptional game she worked hard. She’s quick, she attacks and defends well. She overall an asset on the pitch. (Ellie 12yrs).

Passing superb and her awareness for finding her team mates was second to none. (Laura Garraway)

England started poorly but grew into the game and deservedly turned it around. Great goal by Mead and Bronze often in thick of the action. Twas never a penalty! (Anon) 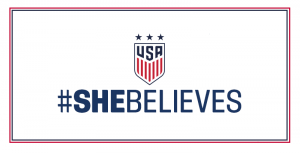 EVERYONE WHO VOTED WENT ‘IN THE HAT’ TO WIN A SHE KICKS HAT & T-SHIRT: the lucky winner was Phillipa Kipling of Brighton.

DON’T FORGET TO VOTE FOR YOU #SKPLAYEROFTHEMATCH AFTER THE USA GAME!

#SHEBELIEVESCUP ENG 3-0 JAPAN: ‘SHE KICKS Player of the Match’ Results

A thrilling end to a fantastic tournament, saw the Lionesses beat Japan 3-0 in their third game to claim the 2019 SheBelieves Cup. Your top 3 #SKPlayeroftheMatch #Lionesses in the victory over Japan, in reverse […]

Welcome to the She Kicks Player of the Match vote for: England v Japan (LIVE on BBC FOUR, programme starts at 10.00pm)   After the end of the game, from the dropdown list below, please […]

#SHEBELIEVESCUP ENG 2-2 USA: ‘SHE KICKS Player of the Match’ Results

After another truly thrilling game of football – ‘a chess match in the first half and a boxing match in the second,’ was how Phil Neville described it – saw England draw 2-2 with the […]