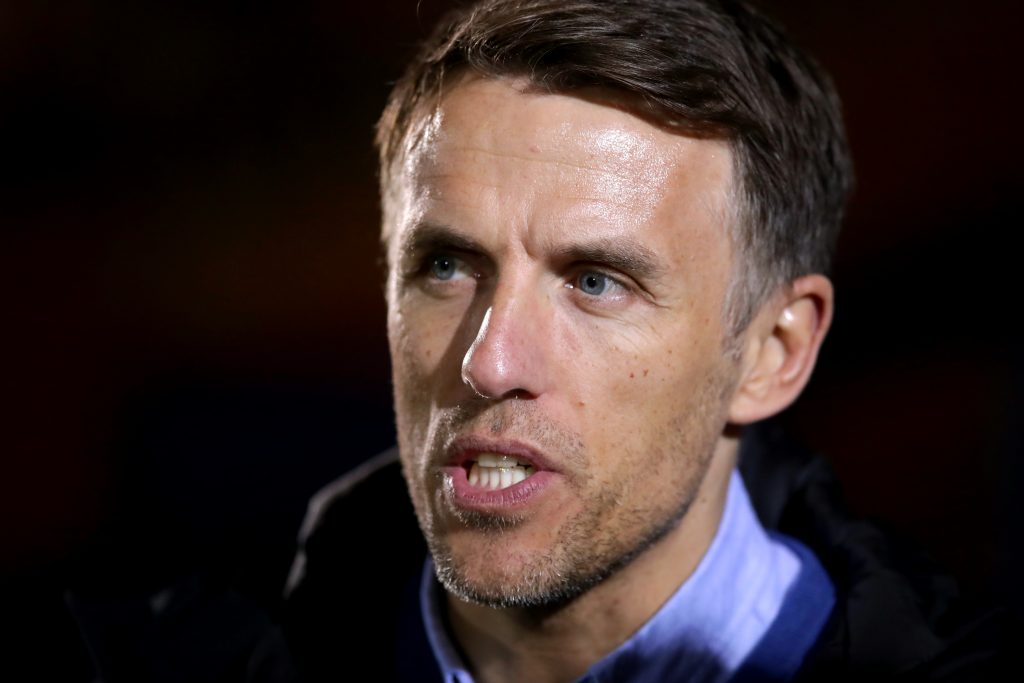 Very happy with the win, the character displayed and the football played in the second half, England coach Phil Neville shared his thoughts after the 2-1 comeback win against Brazil in their SheBelieves Cup 2019 opener in a chilly Philadelphia yesterday evening. The substitutions and player switches certainly contributed to the result, so the coaching staff certainly played their part.

He is very honest in his appraisals and generous in his willingness to explain the thinking behind decisions and also messages conveyed to players, and as we look ahead to June with anticipation, we think you should be able to digest it all too. With further comment (including thoughts on Rachel Daly and Beth Mead and info about Jodie Taylor) to follow, here’s the first part of his post-match reaction…

On how satisfied he was with the team, having gone down 1-0 and coming back to win and play some good football in doing so:

First half we didn’t play well at all. I was really harsh on the team at half-time because our standards are better than that. Probably too harsh really, because after the game when you’ve won and your emotions have gone you think about what they’ve been through over the last three or four days. We tried to pick the freshest team we possibly could.

One thing about this tournament, as good as it is, you’ve got to get here early and you’ve got to prepare for the games with the jet-lag and the travel. We’ve trained well in the last couple of days, I just think in that first twenty minutes we were just off the pace. You could tell Brazil had been here longer than us.

We didn’t play with any kind of purpose or intensity and we got punished. We were 1-0 down and deservedly so, I felt. It wasn’t until the last 10-15 minutes of the first half that we started to get a bit of a second wind. That can happen in football, where you’re feeling leggy and can’t get your rhythm and all of a sudden something just kicks in, could be a tackle or an opportunity. I think Nikita had an opportunity and it just sparked us a little bit. They’d been winning every second ball. We were just starting to get our second win when we went in at halt-time.

Apart from the penalty I don’t think Carly Telford had a save to make in the game, really. So, I was pleased. That was a long answer! [Laughs].

On the team still pressing, pushing forward continually, even after the goals:

That’s how we want to play. In the first half we played too much in our half. I’ve got to say the pitch was very slow and sticky, there was no real speed through the pitch. Looking back it would have been better if they’d watered the pitch (from a selfish point of view). It slowed our game down.

In the second half you saw the game stretched. Brazil tired, we didn’t we got stronger. All of a sudden Fran [Kirby] started to pick the ball up in the pockets and Formiga was struggling to pick up that, we started play the ball through the lines and it released the wide players: Nikita Parris, Karen Carey, Toni Duggan and Beth Mead when they came on. The game got stretched, they had a threat on the counter attack but our intention was to win the game. At the end, even though it’s a three game tournament, it felt like we’d just won a quarter-final, in a way.

On whether switching Lucy Bronze into midfield was a planned move:

It wasn’t to be honest, but from 1 to 11 she could play anywhere. I just felt that we needed a physical presence in there. If you think about: no Jill [Scott], no Jade [Moore], no Jordan [Nobbs], I just felt we just needed a bit of physical presence in there and Rachel Daly has been fantastic in the last two camps at right-back. To win the game you need to make decisions like that.

It was a total one-off…I think. She did a really good job in there, she looked powerful, she was winning headers. Because we pressed higher their keeper was kicking a lot more and she was in there to win the headers and give us the physicality that we needed towards the end of the game.

On what other aspect than the determination pleased him about the performance:

The spirit and togetherness. That desire to win games of football. That’s what I saw in the second half, I saw a team that every time we broke the line, it was a team that wanted to score and wanted to win. I felt that this was the best from the team over the past twelve months of desperately wanting to win a game of football.

I saw a real determination and that’s a special quality to have in a team. I think we can play better. The players have just said that in the dressing room now. All in all, when you start a tournament, it’s really important to get off to a winning start.

AND IN CASE YOU MISSED IT, THIS IS WHAT THE PLAYERS HAD TO SAY…

England will take on Brazil, Japan and World Cup holders, and hosts, USA in the annual SheBelieves Cup early next year. Phil Neville’s squad will be competing in the round-robin tournament for the fourth successive […]