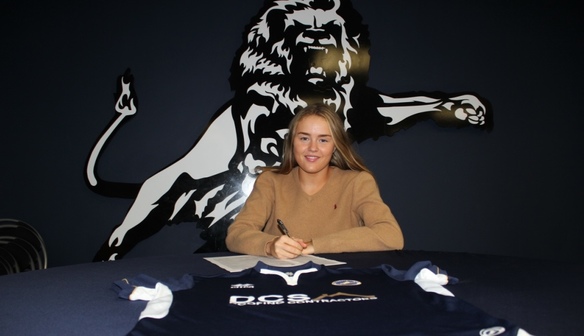 Millwall Lionesses have made their third Summer signing for the 2017/18 season, as Charlie Devlin returns as a permanent signing after spending the Spring Series on loan from Arsenal.

Millwall say that Devlin scored on her Lionesses’ debut against Everton in April and then scored in the winner in her next game against London Bees. She formed a key partnership with young forward Ella Rutherford as the two went on to assist each other in multiple games. Devlin ended her loan spell with the Lionesses with 3 goals and 3 assists in 5 games.

After making such an impact on the team, Manager Lee Burch was more than pleased to sign Devlin on a permanent transfer. Burch said to millwall.fawsl.com: “It’s fantastic to have Charlie back. She came in last season, put her head down, worked hard and impressed everyone at the club. We weren’t sure what Arsenal were going to do come the end of the season as she did so well here, but we’re glad to get her on a contract with us.”

“She’s a local girl who previously played at our Centre of Excellence so she knows what the club is about and we know she’s going to fit in with our system perfectly.”

Devlin added: “It’s good to be back. The girls here are great, we got on and finished the season strong. It’s going to be a big season for both me and the club but I’m looking forward to getting started now.”

Captain Leighanne Robe struck a dramatic late winner as Millwall Lionesses came from behind in the closing stages to snatch a vital 2-1 victory against Aston Villa, thereby closing the gap on leaders Doncaster to three […]

The Board of Directors and senior management at Millwall Lionesses have decided to become an independent entity from the end of this current campaign. A statement on the Millwall FC website said: This will mean […]