FROM #SK66: Leicester-born and the club’s longest serving player, 28-year-old central defender Holly Morgan has been a ’Fox’ since the age of 11. A qualified solicitor, she signed professional terms at the start of the 2020/21 season. As someone who truly ‘gets it’ as a player/fan of their team, we kicked our captaincy Q&A to the City skipper… 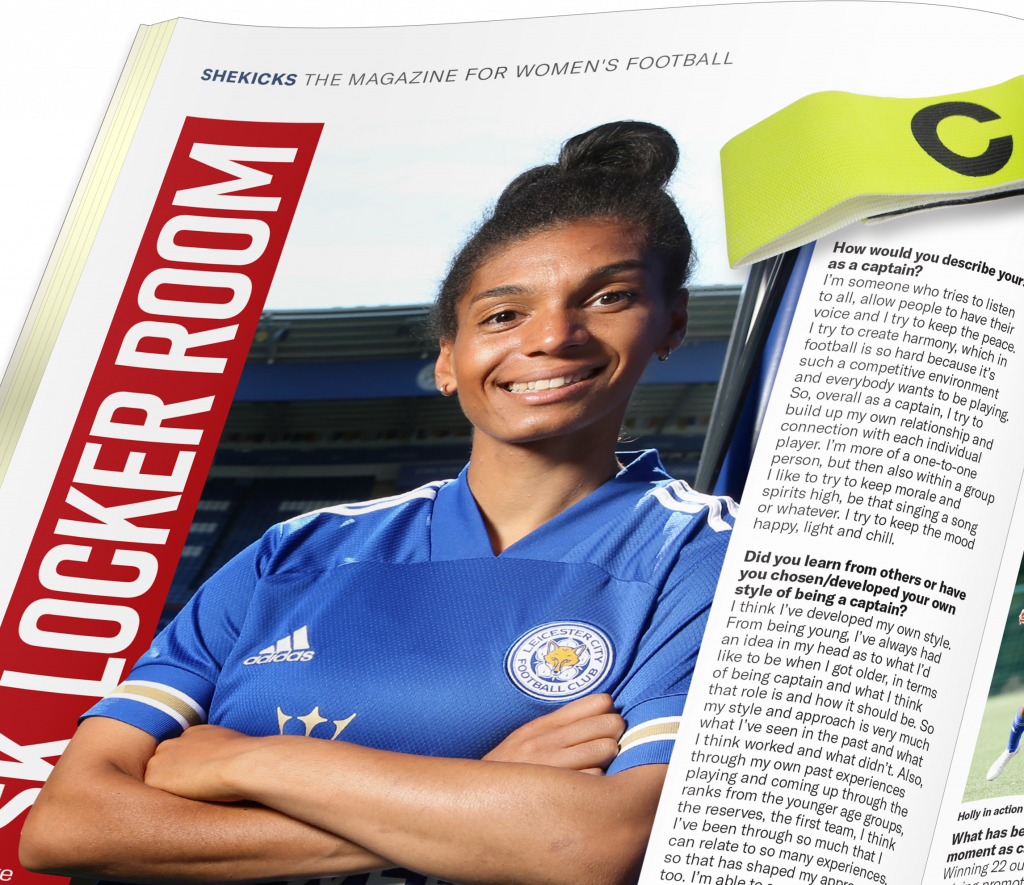 SK: How would you describe yourself, as a captain?

HM: I’m someone who tries to listen to all, allow people to have their voice and I try to keep the peace. I try to create harmony, which in football is so hard because it’s such a competitive environment and everybody wants to be playing. So, overall as a captain, I try to build up my own relationship and connection with each individual player. I’m more of a one-to-one person, but then also within a group I like to try to keep morale and spirits high, be that singing a song or whatever. I try to keep the mood happy, light and chill.

SK: Did you learn from others or have you chosen/developed your own style of being a captain?

HM: I think I’ve developed my own style. From being young, I’ve always had an idea in my head as to what I’d like to be when I got older, in terms of being captain and what I think that role is and how it should be. So my style and approach is very much what I’ve seen in the past and what I think worked and what didn’t. Also, through my own past experiences playing and coming up through the ranks from the younger age groups, the reserves, the first team, I think I’ve been through so much that I can relate to so many experiences, so that has shaped my approach, too. I’m able to see both sides of the coin, whether it’s good or bad, and how to act in certain situations.

SK: Have you changed as a captain, with experience, over time?

HM: I think I have. I would say I’ve become more quiet, more observant and only got involved when I really, really need to, because in the past,
I was constantly being involved or talking. Sometimes, when you’re captain, people can be reliant on you. They think ‘you’re captain so you should talk,’ or ‘you should do this,’ but as I’ve got older, I’ve relished other people taking on leadership roles as well.

SK: What has been your proudest moment as captain of Leicester City?

HM: Winning 22 out of 22 games and gaining promotion [from FA Women’s Premier League Midlands Division One] in 2015/16, just because that season was really hard. We had a lot of injuries and went through a lot, and I learnt a lot about myself in that year.

SK: What qualities do you think are most important in being a captain?

HM: First and foremost, you have to listen but you also have to have the respect of your players, and in order to get that respect, you have to earn it. It doesn’t just come with having the title. It’s also imperative that you lead by example, whether that’s in attitude, behaviour, standards. Listening to people, communicating clearly with people, leading by example, being the motivator and encouraging people, picking them up when they’re down… EVERYTHING is involved in being a captain.

SK: What do you wish you were better at or are always working to improve?

HM: I think I allow myself to get too consumed by things, i.e. if I notice that somebody was impacted by something, I’d be equally affected and I’d struggle to stop that impacting on my playing and training. If I could go back ten years, I think I’d say to myself to not always be so serious, try to take things just for what they are and move on quickly, as opposed to allowing them to stay with me and impact what I do.

SK: Does your relationship with the manager/coaching staff change – especially when it’s your brother – when you are handed the armband?

HM: When I was handed the captain’s armband, Jonathan [Morgan] wasn’t the manager. I’ve always worked towards that position, I’ve always seen myself as somebody that can take on that role. Jonathan didn’t hand me the armband; anything I did or have done is based on me.

SK: How do you balance focusing on your own performance with also helping and leading your team?

HM: When I first became captain, I felt there was a massive magnifying glass on me. I probably put that pressure on myself, but you can’t get caught up in being the captain, you also have to see yourself as a player. So, it’s about separating the two roles. In order to be a good captain, I have to be able to do what I do best first. When I’m more comfortable and feel like I’m playing freely and with confidence, that’s when I’m at my best to help the team.

SK: Do your responsibilities continue after the game is over?

HM: You always have to be switched on, whether that’s in a game, after a game, in training or on a day off; the role of a captain never stops.

SK: Any advice for those being asked to lead their side?

HM: It develops you as a person and it’s a privilege to captain a team, because you’re someone that you hope people look up to. You have to enjoy it and make it your own. Every captain will be different. One way is not right, the other way is not wrong, it’s what you make it and what you think will benefit you and the team, and the club as a whole.

Sins bins for Tier 3 and below in women’s football

The Football Association has today announced that temporary dismissals, also known as sin bins, will be introduced across all levels of grassroots football from the start of the 2019/20 season. The mandatory rule change will […]

Leicester City legend Emile Heskey returns to the club to mentor the Foxes female players during their transition to full-time professionals. Heskey, who won 62 caps for England, will use his experience to support Head […]

Leicester City have agreed new contracts with nine of their players ahead of the Foxes’ first season in the Barclays FA Women’s Super League. Last season’s top scorer Natasha Flint has agreed a new deal, […]