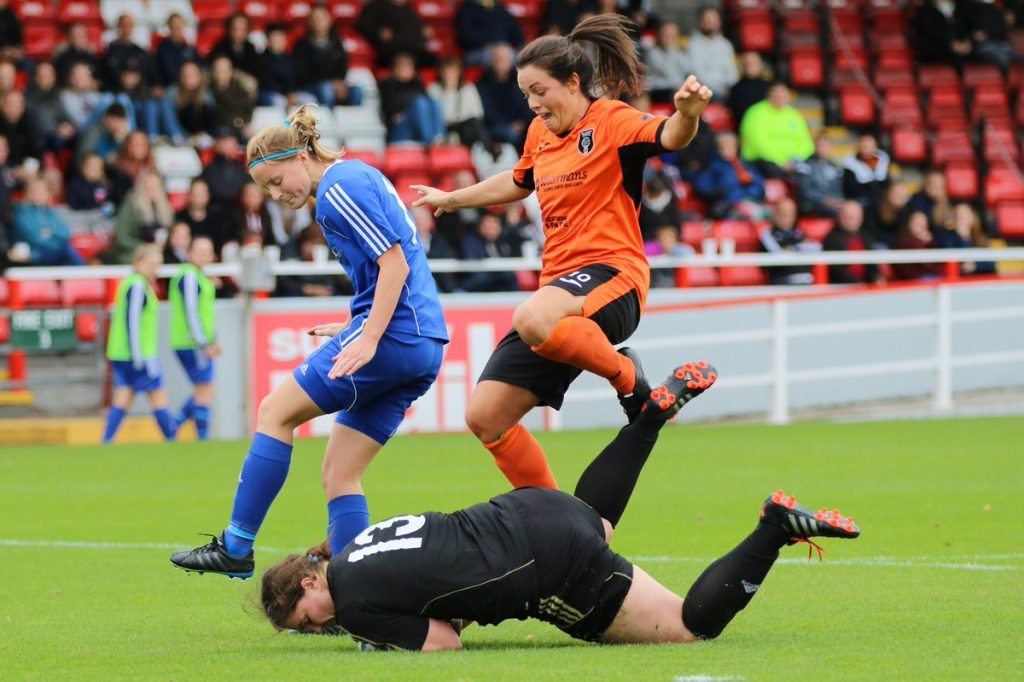 Glasgow City and Hibernian will again meet for the SSE Scottish Women’s Cup, after both easily won through their semi-finals at Forthbank Stadium.

Holders Hibernian saw off Rangers 4-0, with three of those goals coming in a devastating six-minute spell, when the Gers had an effort ruled out.

The first goal came on 25 minutes as Rachel McLauchlan’s ball to the near post was placed beyond keeper Jordyn Elliot by Katey Turner.

Lisa Robertson the struck from distance to make it 3-0 on 21 minutes.

The scoring was completed midway through the second half, as a Robertson corner was nodded in by Abi Harrison.

Not only did Rangers then also have a Holly Napier goal disallowed for offside but Elliot was sent off after the final whistle, apparently for kicking a water bottle into the crowd.

Forfar bow out to Glasgow City

Keeva Keenan doubled the lead on 34 minutes from a Leanne Ross free-kick, while City keeper Lee Alexander had a dipping Caroline Heron effort to keep out on half-time.

Abbi Grant went on a run to slip the ball into the far corner for 3-0 and in the last 6 minutes, Joanne Paton won and converted a penalty, with a fine Megan Foley finish making it 5-0.

The final, won last year on penalties by Hibs, will be at Livingston FC’s Tony Macaroni Arena on 26th November.

Meanwhile in SWPL 1, the only game saw Hamilton Academical beat Aberdeen in the basement battle.

Wins for Hibernian, Glasgow City and a first of the season for Spartans in the Scottish Building Society SWPL 1, while St Johnstone drew at SWPL 2 leaders Hearts. Results for 17 March SWPL 1 […]

Glasgow City were crowned Scottish Champions for the eleventh successive season after defeating Hibernian 3-0 in Edinburgh. City, who have not conceded a league goal since last May, came out all guns blazing and raced […]