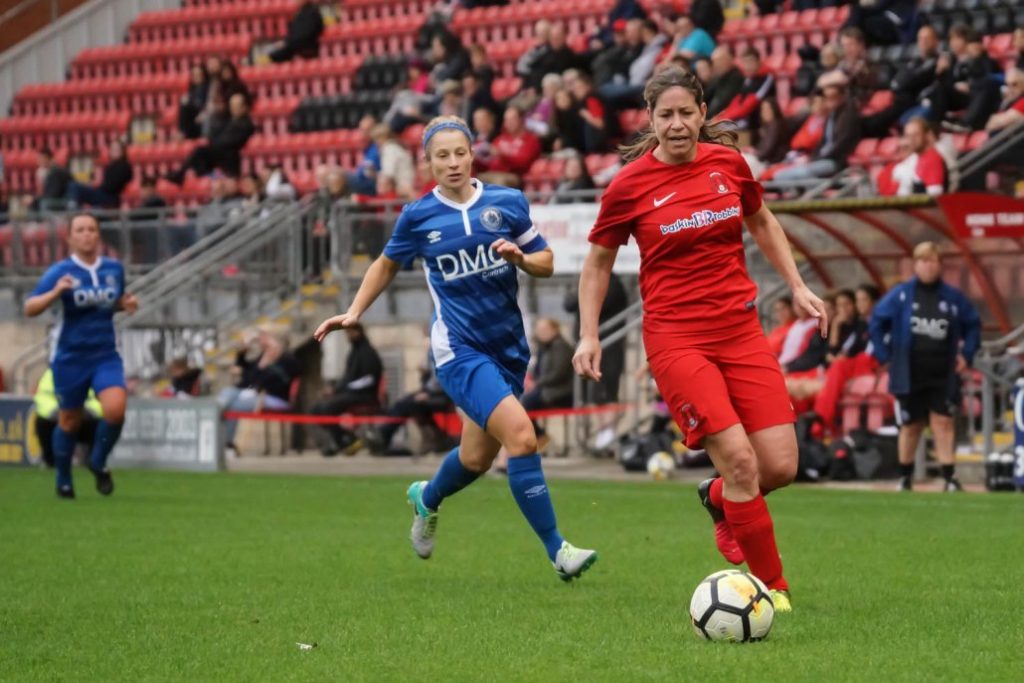 Northumberland League Alnwick Town spanned three divisions to knock out Rotherham United, with a brace by Jade Barrett, one each for Amy Hateley, Georgia Thompson and Mel Darling.

East Midlands League Nettleham pulled off a fine 4-0 result away at Burton Albion. Leading with a penalty at half-time, they soon doubled the lead from 25 yards on their way to a memorable victory.

Eastern League Harlow Town accounted for established FAWPL side Denham United, Taylor Handscomb getting the goal after only 6 minutes.

There was nearly a seventh shock as South West League Torquay United took Brislington all the way to a shoot-out before going down 4-2 on penalties.

TNS were also under threat from Shrewsbury Town after a surprise early goal by Tania Prior for the visitors but the Saints hit back with a Kim Bebbington brace and one from Emily Ridge.

Well over 500 fans were at Bramall Lane to see Sheffield United share six goals with Leeds United before winning 3-2 on penalties.

Ashford Town (Middx) let slip a 4-1 interval advantage to London Kent Football United but recovered to win 6-4, with Alison Cheatley getting a treble.

Charlotte Proud had a four-goal haul in Brighouse Town’s 6-1 win over Wakefield.

Southampton Saints scored in the 1st minute at Cheltenham Town through Nicole Matthews and went on to win 4-1, with singles also from Libby O’Dell, Catherine Browning and Alisha Buckingham.

Nichole Goundry-Havery bagged both goals in a nine-minute spell straddling the interval, as Chester le Street beat Barnsley 2-1. with Abby Parkin scoring for the Tykes.

Luton Town progressed at Maidenhead United, where Jess McKay got the only goal in the second half.

Just a solitary goal too at St Nicholas, where Michelle Munro scored to see Keynsham Town into the next round.

Steel City Wanderers fought back from 1-0 down at home to Morecambe to go through 2-1.

Hull City scored three second-half goals to win 4-1 at Crewe Alexandra, whose Leanne Derry netted in the first period only for Hope Knight to level right on half-time. Rebecca Beech got the second, Rachael Ackroyd buried a diving header and Katie Thompson scored at the death.

Royston Town won by the odd goal in five at Bedford, where Frankie Smithers struck a 95th-minute decider.

Eastwood overcame a 3-2 half-time deficit to defeat Coventry Sphinx 5-3, Chantelle Robinson scoring in either half.

Chesham United fell behind in the second half to Whyteleafe but still bounced back to win 2-1.

That was the same outcome at New London Lionesses but only after the extra half-hour, as Parkwood Rangers bowed out.

Ipswich Town’s 5-1 win at Cambridge City was crowned by substitute Roxy Small netting an overhead kick with her first touch.

Stevenage had seven separate scored in their 8-0 success Hassocks, where Amy Josland came off the bench to score twice and another subsitiute, Amy Makewell, also got on the scoresheet.

Wymondham Town equaled that tally but with an unusual 9-2 extra-time score over Newmarket Town, with Laura Nicholls bagging four.

Liverpool Feds’ 7-0 win over Mossley Hill included a Sasha Rowe hat-trick, as they eased into the 1st Round Proper.

Top scorers though were AFC Wimbledon, who thrashed Woodley United 14-1, Caroline Bisson and Isi Asplund cashing in with three each.

Buckland Athletic beat hosts New Milton Town 4-1, where Laura Gough and Kirsty Caunter scored inside the first 5 minutes, the former going on to get a hat-trick.

Forest Green Rovers’ unbeaten record was unable to sustain them against Larkhall Athletic, with the Premier League side going away 3-0 winners.

Basingstoke Town came through successfully at FC Chippenham, with Lianne Hill getting a couple in the 6-1 win.

Coventry United rescued a point at Cardiff City Ladies with a stoppage-time penalty, while Newcastle United were 2-1 winners away at Bolton Wanderers. Late goals leave Cardiff and Coventry level In the Southern Division on […]