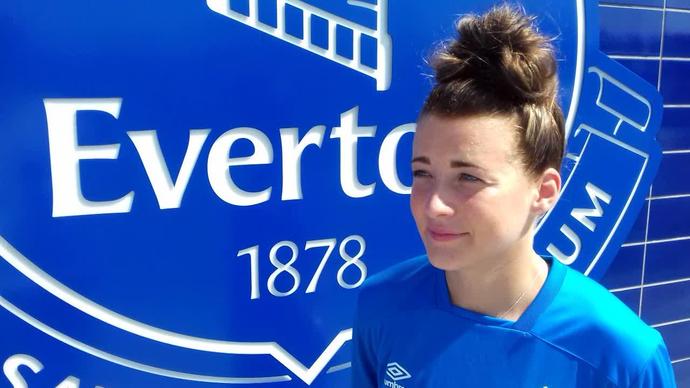 The midfielder made her name at Bristol City, helping the Vixens reach the quarter-finals of the Champions League in 2015.

Joining Notts County later that year, the 23-year-old became a free agent following their liquidation and linked up with Yeovil Town for the remainder of the 2017 Spring Series.

However, she has now made the switch to the Toffees and cannot wait to get started.

“I’m delighted to sign for Everton,” James told evertontv. “It has been a tough few months with everything that happened previously at Notts County but I’m really excited to get started here. I’m really looking forward to it.

“There is an environment here that I can thrive off. The level of the facilities here were definitely a factor in my decision, as well as the ambitions that Everton have.”

Having made her full international debut for Wales aged just 17 in an October 2011 clash with Scotland, James is now closing in on 50 caps for the Dragons.

She also boasts plenty of WSL 1 experience and is looking to help the Blue Girls compete in the top flight in 2017/18.

“Hopefully I can bring a bit of experience to this group, she added. “I am still a young player myself but I have played in this division before and for Wales as well.

“We will push hard for the top two in the league. We are going to work hard for everything that we can achieve. We certainly don’t want to be battling relegation, so hopefully we can have a great season.”

Everton have signed England U-19 captain Esme Morgan on a season-long loan from Manchester City. The 18-year-old defender is comfortable playing at centre-back or right-back and made 10 appearances for Man City last season as […]

Everton Ladies link up with Lil-Lets

Everton Ladies has partnered with feminine hygiene brand Lil-Lets for the 2019/20 season. Lil-Lets will work alongside Everton Ladies in promoting the benefits of sport and how it can make a difference to the […]

Hannah Cain has joined Everton after the England U-20 international’s former club Sheffield FC withdrew from the FA Women’s Championship. Cain is currently recovering from an injury which ruled her out of the U-20 Women’s […]