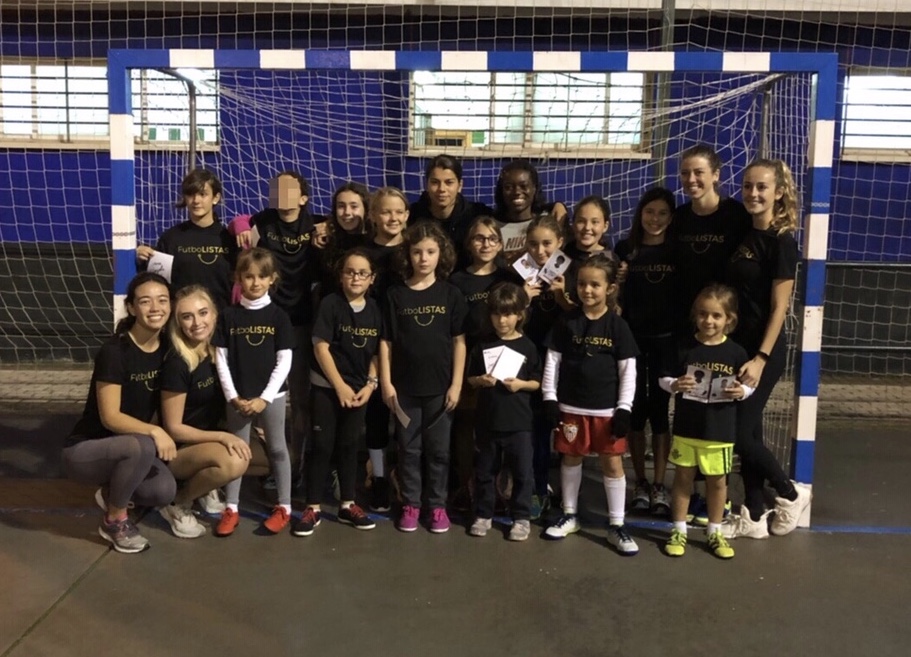 It has been quite the journey for FutboLISTAS founder Brittany Gropp, a lifelong football fan and player, originally hailing from Washington DC but currently loving life in Seville in Spain.

On the back of extensive experience in the fields of marketing and business development – including five years as Partnerships’ Director at DC-based non-profit Atlas Corps – Brittany set up FutboLISTAS with the aim of teaching girls English and life skills through the magic of the beautiful game.

Brittany spoke to She Kicks’ reporter Nick Aitken, a fellow member of Spanish organisation Leadership Woman Football, about her journey so far, why sport is so key to girls’ futures, and her plans to keep growing FutboLISTAS – crisis or no crisis!

She Kicks: You’ve got a very interesting background, having originally wanted to become a sports journalist before (wisely I think!) moving into the fields of business development, partnerships and communications. How important has picking up such a range of experience been when it comes to setting up your own business? 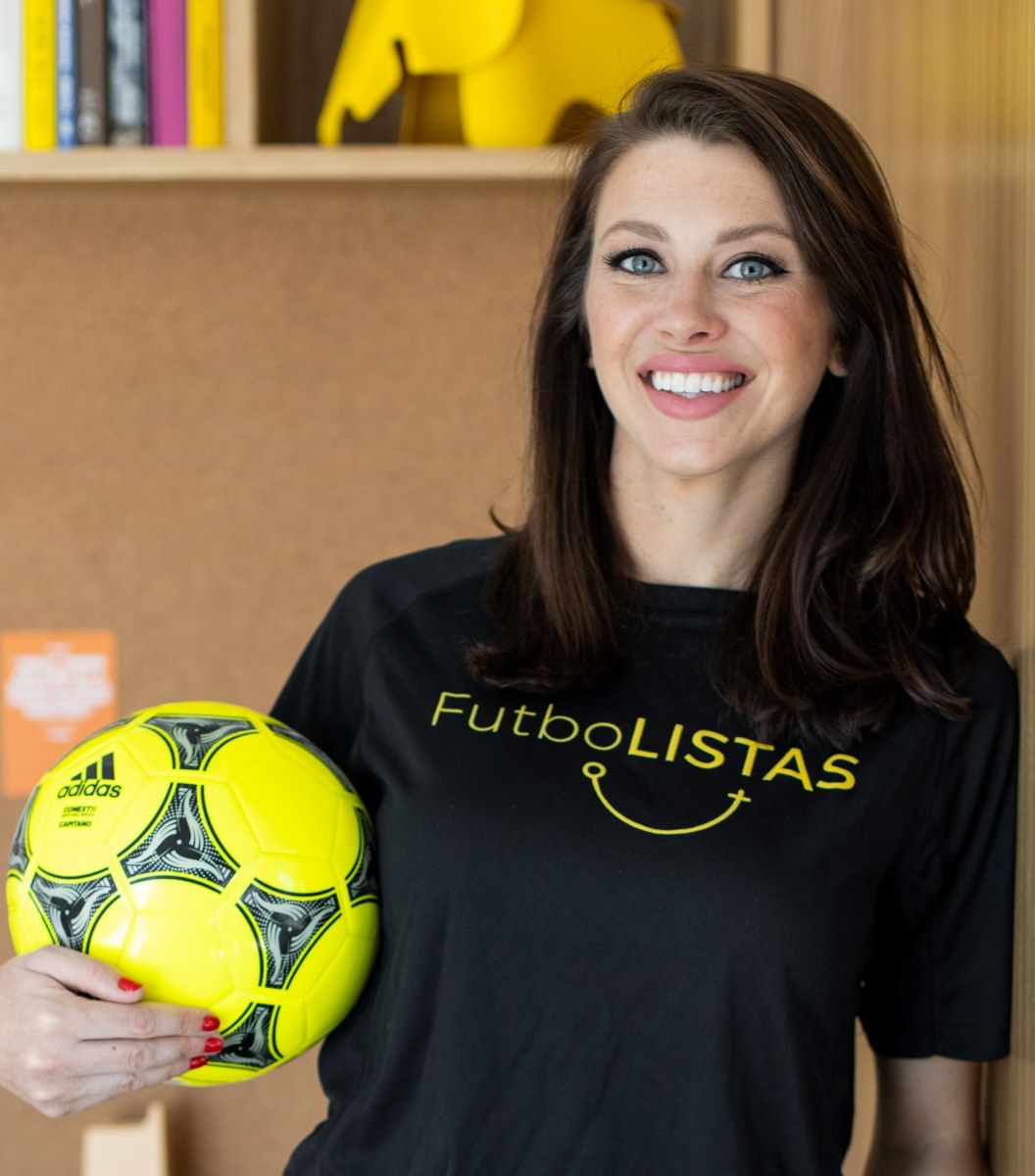 SK: Can you tell us a little more about some of the standout sports-related initiatives you have been involved in?

BG: Yes, when I first decided not to pursue a career in sports journalism, I worried that I had lost out on the opportunity for sports to be a part of my career – but that hasn’t been the case at all! Sports were a part of my work as Partnerships Director at Atlas Corps, which develops international social-change leaders through fellowship exchanges in the USA. Two of my favourite partners whose fellowships I organized with Atlas Corps are DC SCORES and PowerPlay NYC, both organizations that focus on sports-based youth development, and both led by incredible, inspiring women who have given me guidance and advice prior to and during the launch of FutboLISTAS.

SK: When did you yourself catch ‘football fever’ and do you still play? If yes, what kind of a player are you?

BG: I fell for the game very early on in life. I started kicking the ball around with my next-door neighbour Jenifer when I was three or four years old, and my dad took me to sign up for a league as soon as I was old enough. I was fortunate enough to play for one of the best club teams in the country from 12 to 17, spending my weekends and summers travelling to different states, for showcase tournaments and bragging rights.

At 17, when I decided I didn’t want to pursue a soccer scholarship in college and instead wanted to be a ‘normal’ college kid and focus on my career, I bid farewell to my club team and my serious soccer journey. Ever since, I’ve just played for fun! I currently play for a futsal team in my neighborhood Triana called Santa Ana. As a player, I’m a fierce competitor and I can do a bit of everything – score goals, carry the ball and defend too. I play wherever the team needs me, they’re my family here in Seville!

SK: What was it that made you decide to move to Spain?

BG: I have a bit of a love affair with Spain. I studied abroad in Málaga back in 2010. It was my first time ever using a passport and I was lucky enough to be there when Spain won the World Cup! It was one of the most incredible experiences in my life, and it sparked my interest in international travel and exploring other cultures. I ventured back to Spain, this time to Madrid, in 2014 when I was transitioning my career from the private sector to the social sector. I taught English for a year in Madrid and volunteered for a TEDx event, while getting my Spanish to a conversational level. While in Madrid, I met an American friend who married a Sevillano. Not only did I get an invite to the Seville-based wedding, but they also let me tag along to the Feria de Abril a few months later. It was during Feria that I knew I’d find a way to make Seville my home in the future.

SK: Your Spanish is incredible, have you always enjoyed learning languages?

BG: It’s taken a lot of practice! After being in Madrid, I went back to DC for a year, during which I hung out with a ton of Spanish-speaking friends to strengthen my language skills.

But despite all that practice, when I first got to Seville I still remember often sitting and thinking, “I have absolutely no idea what they’re talking about!” So, from the moment I arrived, I committed myself to really immersing myself in the language.

SK: In Spain people are wild for learning English and FutboLISTAS taps into that, as well as the urgent need to give girls more and better access to sport. How did you come up with the idea and what obstacles have you had to overcome?

BG: I actually originally came up with the idea for FutboLISTAS in 2016 when I first moved to Seville, though it looked a bit different than now. After getting a promotion with Atlas Corps, I left the idea behind for a couple years and came back to it in a pivotal moment — during my first Camino de Santiago in August 2018. At that time, I was actually thinking about moving back to the U.S. at the end of the year for better professional opportunities.

However, along the Camino, in speaking with fellow pilgrims about my love for Seville, I realized the project could give me the professional development I sought, plus allow me to stay in the city of my dreams. And here we are nearly two years later!

My biggest obstacle came last summer when, on 7 July, celebrating USA’s Women’s World Cup win, I was playing a friendly match with friends when I fell HARD on my supporting leg after a shot (and awesome goal, for the record ;)). As I fell, I heard noises that I’d never heard in 25-plus years of soccer, and I knew then it was a bad injury. And it was…

Just two months before launching my dream social enterprise, I had a broken fibula – sidelining me for six weeks. This left just three or four weeks at the end of August/beginning of September to recruit our girls and families, but also to recruit our mentors and our
coaches. It was a tremendous amount of work, and I couldn’t have done without a public relations genius, María José Andrade, who helped make sure the media were talking about our programme. 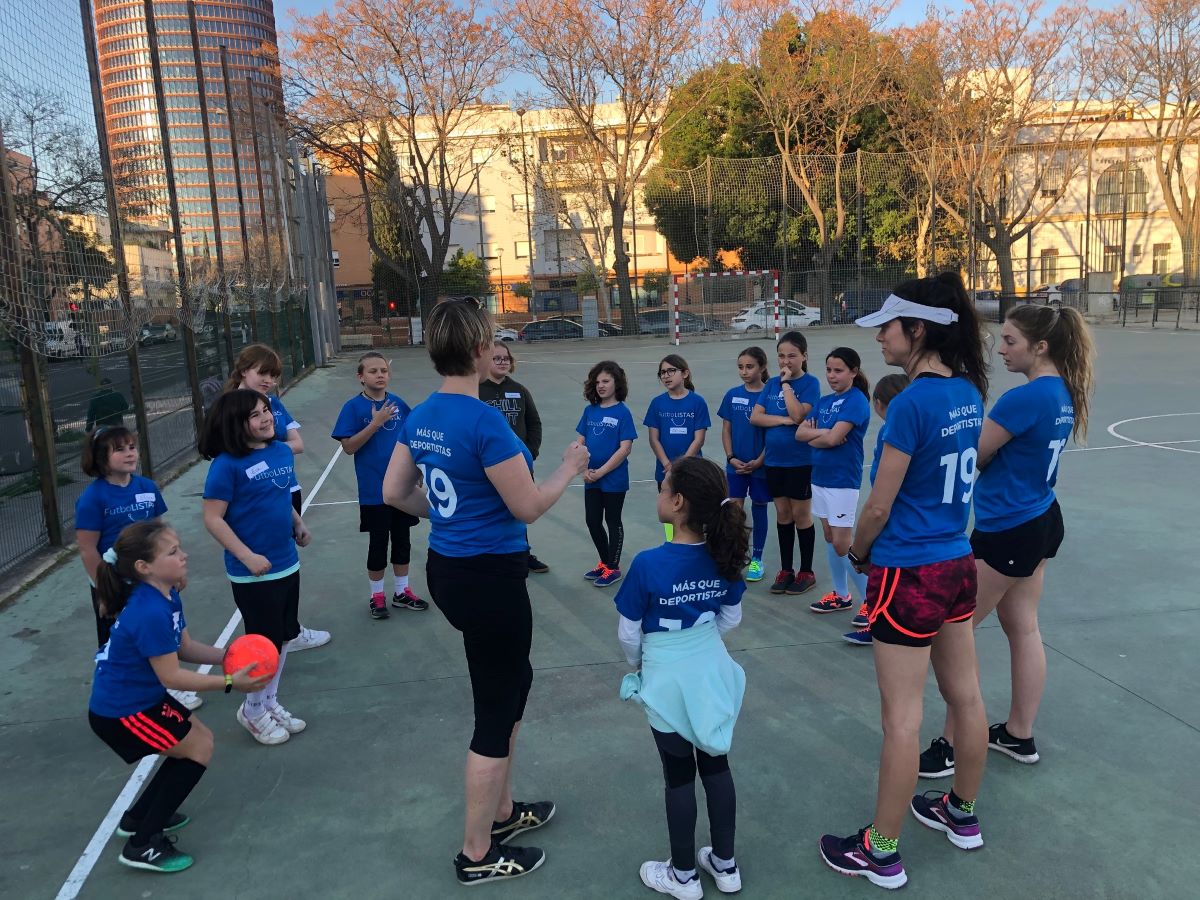 SK: FutboLISTAS’ sessions place an emphasis on both fun and the life skills that girls can learn while playing, such as leadership, teamwork and perseverance. How important are these skills – plus the access to female role models through your mentor scheme – when it comes to giving girls and women the tools (and the inspiration) to go after opportunities in their lives and careers?

BG: Hugely important. I always say that at FutboLISTAS, we’re more focused on developing future leaders than future professional footballers. In addition to providing space for girls on the soccer field, our biggest objective is to show everyone – our girls, our parents, and our community – that soccer is much more than just a sport. There’s a study by ESPNW and Ernst and Young that surveyed over 400 global female professionals in management positions, which found that 94% of them played sports when they were younger. That’s just one example of the undeniable correlation between sports and leadership due to all of the intangible skills that sports teach you – how to lead, how to work with a team, how to persevere, how to communicate, how to believe in yourself.

At FutboLISTAS, we care more about whether our girls are learning those life skills and getting more comfortable with their English and with themselves than how many games are won or how many goals they score. In fact, the purpose of our female mentors, local
professionals who come to chat with our girls once a month, is to show our girls that much of what we’re learning on the field can be used to chase their career dreams, too.

SK: Tell us about some of the female role models that have spoken at the school, what they do and some of the key lessons that the children took home from listening to them?

BG: It’s a real shame our second season was cut so short by COVID-19 because we had some truly incredible women lined up, but I’m beyond thrilled with every woman who was able to participate as a mentor thus far. One of the girls’ favourites was Amaya Davis, a veteran of the U.S. Navy, an engineer, and a Solar System Ambassador for NASA, who worked to show our girls the importance of chasing your dreams despite any doubters – as well as how key it is to communicate well with your team-mates. 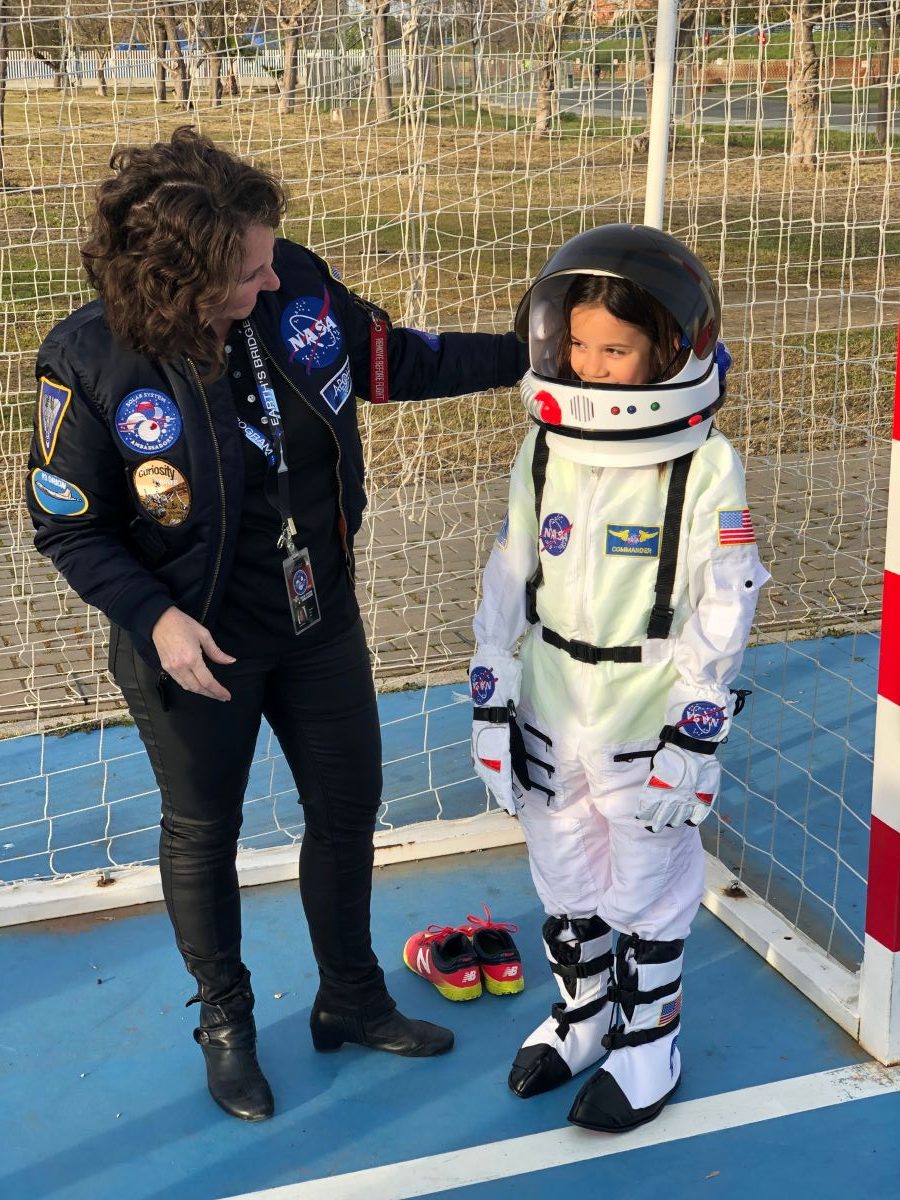 Another mentor who stood out was Nuria Gaciño, sports journalist and voice of Andalucía es Deporte on CanalSur, who spoke with our girls about how to identify their passion and how to make themselves stand out in a sector traditionally dominated by men. Nuria also conducted some mock interviews with our girls, and they were absolutely adorable.

SK: Are there plans in place to set up a kind of ‘reverse’ FutboLISTAS, with children from the UK for example coming to Seville to play football and learn Spanish?

BG: There could be! I’m certainly not opposed to the idea, but my growth plans for now are actually more focused on the professional-development aspect of what we do. We currently work with girls from 6-12 years old, and I’d love to see us expand to work with girls between 12-18 years old in the next three to five years.

My idea is that our programming for the older girls would focus less on soccer and more on mentorship and career readiness. My big dream would be to secure partnerships with companies, who allow our older girls to shadow their female employees in the workplace and participate in other professional development events – so that our girls can better prepare themselves for university and their future careers.

Check out Instagram for the latest news from FutboLISTAS (@futbolistasevilla) and Leadership Woman Football (@lwfcongress)!