Phil Neville has named a 20-player squad for the FIFA Women’s World Cup qualifier away to Russia on Friday 8 June.

The Lionesses go into the Moscow match with memories of a 6-0 home win against the same opposition to kick off the campaign back in September.

Among the names included this time around are Chelsea defender Millie Bright and Manchester City midfielder Jill Scott – with both having missed the 0-0 draw at home to Wales and 2-0 away win in Bosnia-Herzegovina last month.

Neville said: “This is a great opportunity to take a giant step towards our goal of making it to the finals in France next year. We know from recent experience that teams are wary of our attacking threat and we expect Russia to be no different. We will have to be ruthless when opportunities come our way, but it is important we remain patient, focused and calm until they do.

“Everyone is in positive mood about the challenge ahead and wants to end the season on a high. We had a number of players at St. George’s Park earlier this week for some extra training, and it was good to get a look at some of the younger players who are pushing hard for inclusion in the senior squad. We already have a youthful feel but I won’t be afraid to give more a chance next season.”

Arsenal forward Beth Mead is retained in the squad and will be looking to build on her impressive first two caps in the last get-together.

Others hoping to stake a claim will be Reading goalkeeper Mary Earps, Chelsea defender Hannah Blundell and City midfielder Keira Walsh, who at 21 is the youngest player within the selection.

Liverpool defender Alex Greenwood is suspended after her red card last time out in Bosnia-Herzegovina. 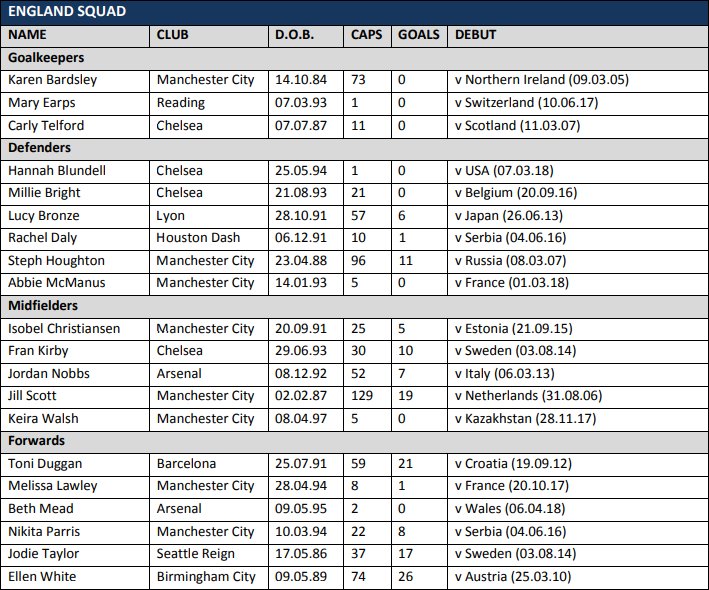 Continuing his commitment to giving opportunities to English coaches after working with Casey Stoney and Mel Reay, Neville has invited England U19s coach Rehanne Skinner to travel with the squad to Russia.

He will also be assisted on this trip by Geraint Twose and Mark Mason, the goalkeeper coach who has been with the group since the La Manga camp in January.

A win for England would move the Lionesses on to 16 points, and leave qualification for next year’s finals firmly in their hands.

They then travel to Wales on 31 August before making the longer trip to Kazakhstan on 4 September to end the campaign. Only group winners qualify automatically with play-offs between the top four runners-up among all seven groups.

England captain Steph Houghton has withdrawn from the squad after sustaining an ankle injury during the team’s final training session. She will therefore miss the first two World Cup qualifiers and return to her club […]

Katie Zelem and Lucy Bronze have both withdrawn from England’s September training camp but Isobel Christiansen has been called up. Manchester United’s Zelem tested positive for Covid-19 and she will now self-isolate in accordance with […]