The big kick off for the FA Women’s Super League is just around the corner, with 20 teams competing across FA WSL1 and 2 in the new winter format. Key players from every club came together to meet the media at Wembley Stadium in London on Friday and we muscled our way in there too. You will probably have read all the really serious pre-season stories, but we figured it might be nice to ask the players about some silly stuff too. Here are our first couple of interviews, watch this space over the next few days for lots more…

Midfielder Millie Turner is Bristol captain this season after a stand-out Spring Series with the Vixens. An England under-23 player, she joined from Everton and started her career at Manchester United’s Centre of Excellence and Stockport County. 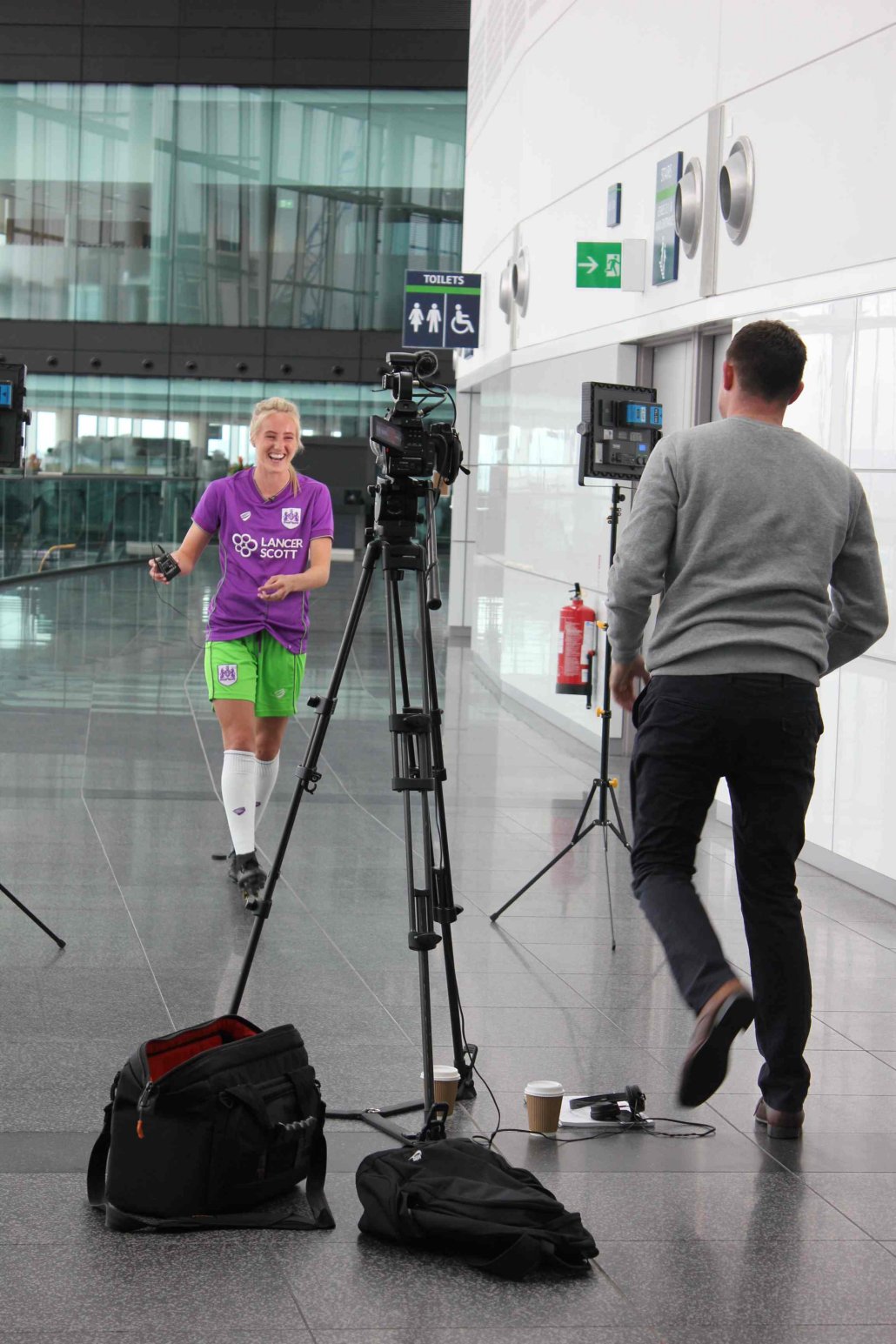 SK: What’s been the hardest part so far?
MT: We had testing the other day, so we had the Yo-Yo Test and a double session after it. [Former Fulham men’s head coach] Rene Meulensteen came in and he led a few sessions, so the past few days has been the most difficult.

SK: Anyone in particular looking good?
MT: Everyone is looking in good shape, we’ve all improved massively in our tests, but if I was going to single someone out it would be striker Lauren Hemp, she’s going to be a massive player for us this season.

SK: What is your squad number and why?
MT: It’s 21. It’s one of my favourite numbers and I grew up idolising David Silva and he’s always been 21. Luckily 21 was available so I snatched that one straight up.

SK: Bought new shinnys and boots?
MT: Not new shin pads but I have bought new boots, Nike Magistas, I’ve quite a few but I only ever wear blackout boots, I think I don’t have enough flair to wear the colourful ones! There’s a kit you can get online and you wait overnight and they black out, I did it myself, blacked out the silver. I’ve had my shinpads for a while but not because of any superstitions.

SK: Do you have an initiation for new players at Bristol?
MT: We do and we just held it last week. It was funny. We didn’t know what to expect when we told the new girls  they had to sing and dance but they definitely put up a good show for us.

SK: When’s your favourite time to play a match?
MT: Usually we play on Saturday evenings and I think for a lot of the girls that’s our favourite, about 6 o’clock. Preparation wise, you can get good food on board, can rest before the game and prepare mentally.

SK: It’s going to be a winter league, how will you stay warm?
MT: I haven’t thought about it. We’ve just got to make sure we’re running around enough and working hard!

SK: Do you have a team huddle before a game?
MT: Yes. Now I’ve been made captain I have to speak in it and it just comes from the heart, you say whatever is on your mind at the time. I do remember my first and it was an absolute shambles, I was so nervous, but you get used to it and it’s alright after a while.

SK: Who is last out of the changing rooms?
MT: Probably Chloe Arthur, she takes absolutely ages to get ready, probably on her phone, doing her hair. A lot of the new girls shower, even though we live about two minutes away, so they’re in there for a long time while we’re enjoying our post-match pizzas.

SK: Who has the cheesiest taste in music?
MT: Definitely Loz Dykes, she’s 29 and loves all the old music from the 80s and 90s.

SK: Who is the first asleep on the coach?
MT: Probably again Loz Dykes.

SK: Who always sits at the back?
MT: There’s a table of eight, me Carla [Humphrey], Sophie Baggs [Baggaley], Chloe Arthur and Caitlin Leach, we always shotgun it.

SK: Who do you tip for the WSL1 title?
MT: I’d like to say us but we have to be realistic. I think it’ll be tight between Man City and Chelsea, I think they’re the title contenders this season.

Defender Sarah Wilson joined Durham from Newcastle United after five seasons and 91 appearances for the club. She made her debut for Durham against Oxford in June 2014 and the skipper has become a mainstay of the Wildcats defence ever since. 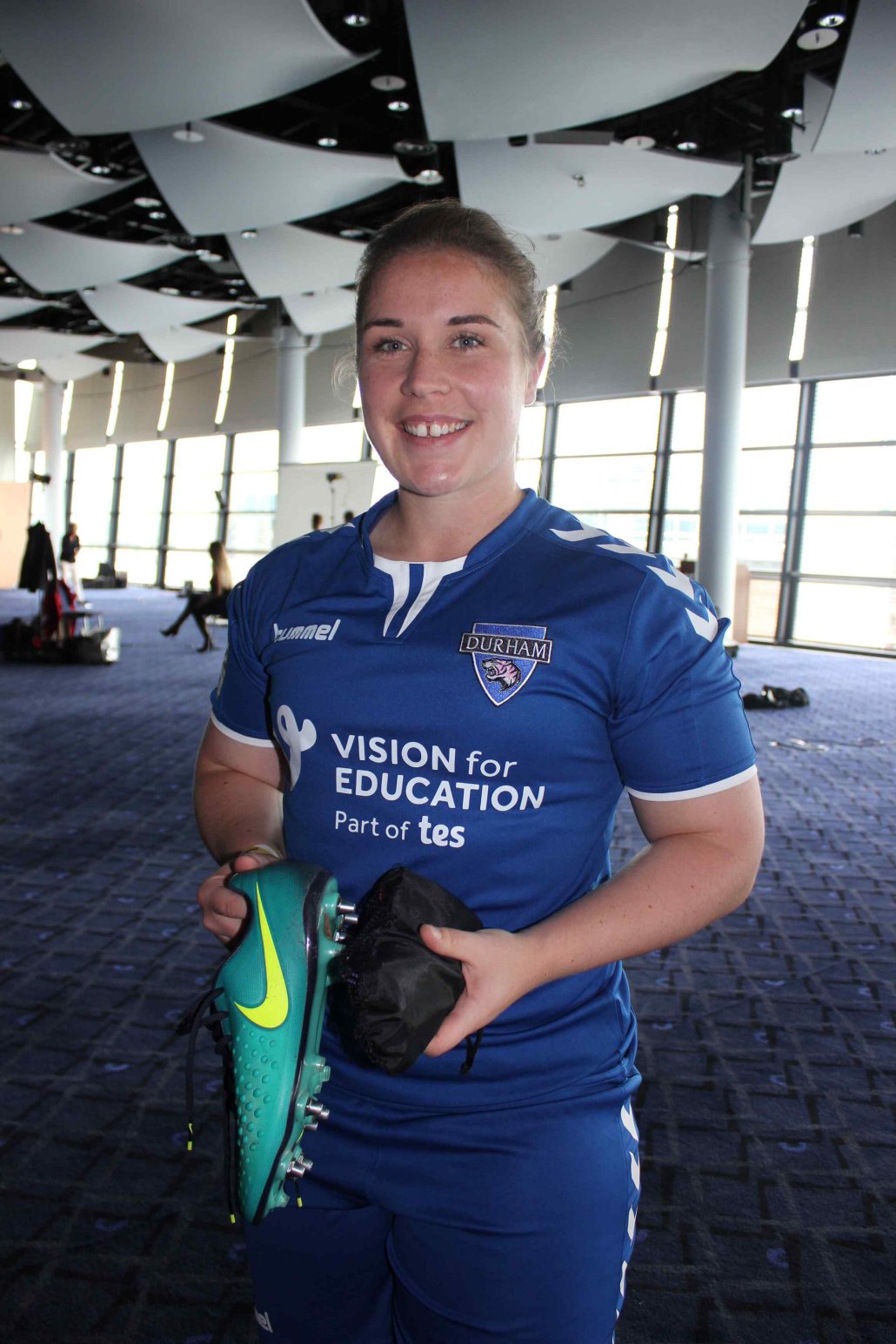 SK: How’s pre-season going?
SW: It’s been good, it’s been long and tough but we’re coming to the stage where we’re playing a lot of games now, getting lots of minutes, so it’s good to see the girls coming together both on and off the pitch.

SK: What’s been the hardest part so far?
SW: The fitness testing, that was pretty brutal, lots of running. We’ve got a new strength and conditioning coach who is changing a little bit of the values, so new tests, new ways of working, but it’s good.

SK: What is your squad number and why?
SW: Five. I think it’s typical centre back. I’ve always had it and never played in any other number so it’s special.

SK: Bought new shinnys and boots?
SW: New boots not shin pads. I’ve got two pairs so far but I’ll need another before we start. I go through boots like wildfire because I’ve got an awkward draggy left foot that gets tangled all the time on the 3G so the front of the boots always rip on my left foot. It’s a pretty expensive habit. I’ve played with the same shin pads for years.

SK: What would happen if you lost them?
SW: I can’t even think about that!

SK: Do you have an initiation for new players at Durham?
SW: We’ve never really done it before but we’ve had a Scotland away trip over pre-season and it was the typical get up in front of everyone, stand on a chair and tell everyone an embarrassing or interesting fact. It’s good, it just breaks it down a little bit for the new girls, getting them involved.

SK: It’s going to be a winter league, how will you stay warm?
SW: Long sleeved SKINS probably. It’s a big change, but our summer isn’t really that great anyway.

SK: When’s your favourite time to play a match?
SW: Probably 12 o’clock, get it over and done with. It’s tough when you play an evening kick off, especially if you’ve been at work or something like that, it’s tough to get in that mindset, so probably the lunchtime ones.

SK: Do you have a team huddle before a game?
SW: Every time. I can’t tell you what we say, it’s a secret! No, it’s pretty much getting everyone hyped up for the game really, just remind everyone of our values, not to worry about the other team, think about ourselves, be confident in yourself and each other.

SK: Can you hear the fans when you play and is there a song or chant you listen out for?
SW: Personally I just switch off. I know my family are always at home games, they usually stand in the same place, I can’t really switch on until I know that they’re there, but apart from that I kind of zone out. But we have great fans and are really building up an excellent fan base, they play a huge role in our games both home and away so we’re really thankful for that.

SK: Who is last out of the changing rooms?
SW: Helen Alderson, she’ll have been trying to perfect her bun, every single time.

SK: Who always sits at the back of the coach?
SW: Ellie Christon.

SK: Who do you tip for the WSL1 title?
SW: It’s tough but I’m backing ourselves, I’m hoping we can go and do it, that’s the plan so I’ll say us.

Interviews and images by Catherine Etoe

Kelly Simmons : ‘WSL can break into the mainstream’

Kelly Simmons today began her new role as The FA’s new director of the women’s professional game and says it is capable of “breaking into the mainstream” on a regular basis. Simmons says securing title […]