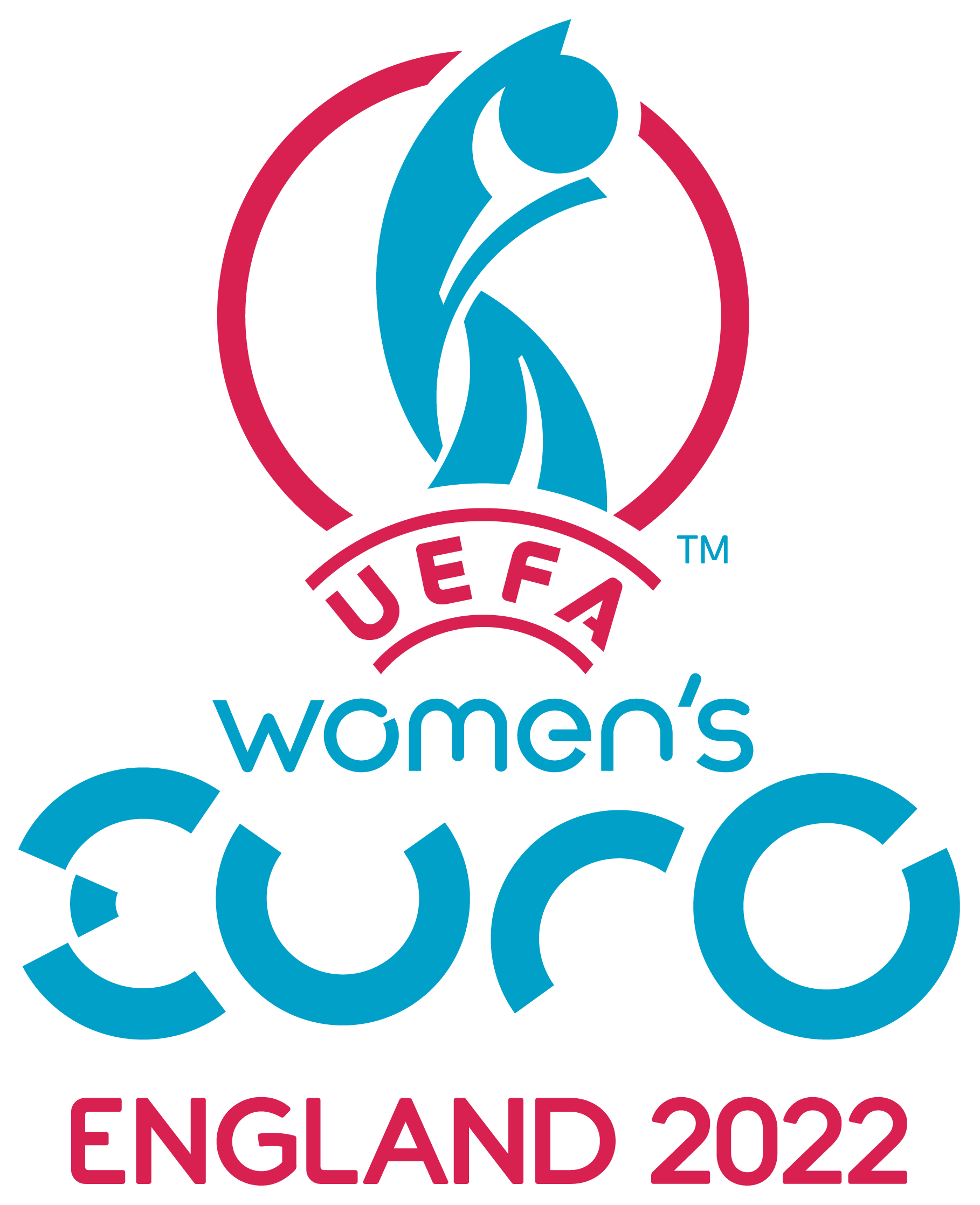 With all 16 teams now confirmed for UEFA Women’s EURO 2022, a major ticketing roadmap and legacy programme has been unveiled to illustrate how a record-breaking tournament that has the power to inspire the next generation of players and fans, will be delivered on home soil.

With over 700,000 tickets available across the 10 venues in nine host cities, an unprecedented number of fans will be able to experience the biggest women’s European sport event ever from 6 – 31 July 2022. The ambition is to set a record attendance for a UEFA Women’s EURO fixture [currently 41,301, 2013 Final] at the tournament’s opening game at Old Trafford. It is then the aim to break this record once again for the Final at Wembley Stadium, where it is hoped a sell-out crowd will fill the national stadium, surpassing the current European record for a women’s game of 80,203 set at London 2012. 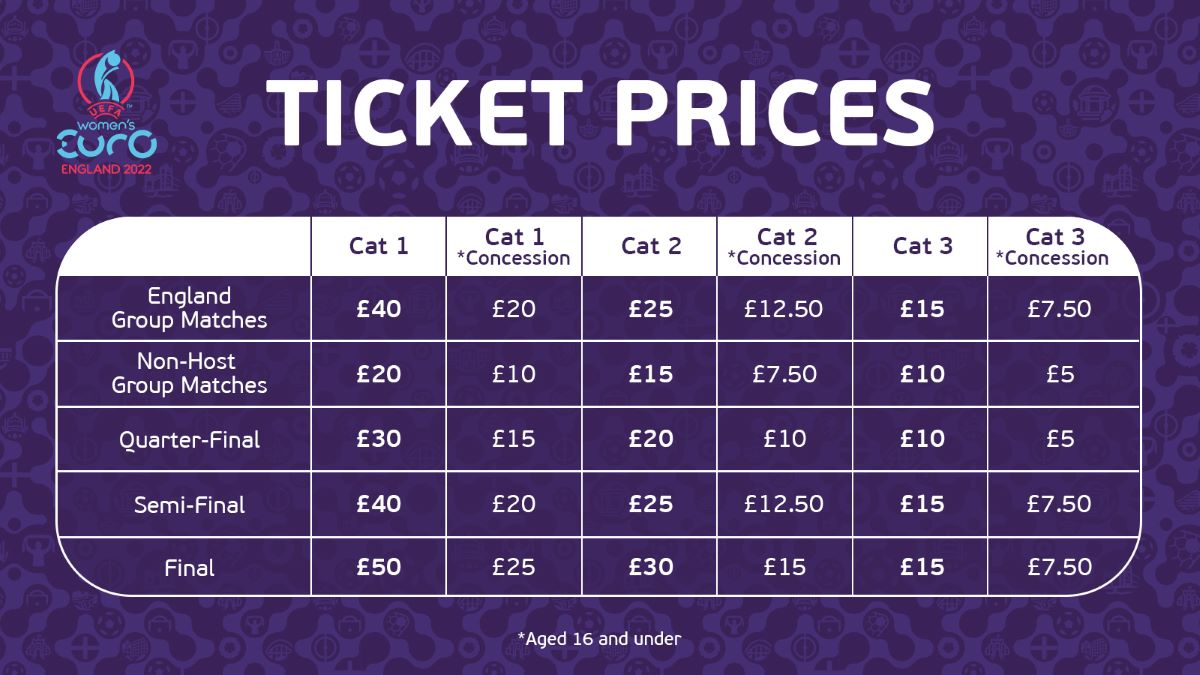 Next summer’s celebration of football sees tickets ranging from £5 to £50, with over half a million tickets available for £25 or less, ensuring the UEFA Women’s EURO 2022 is an accessible event for all. The tournament will see a family of four [two adults and two children] able to watch some of the World’s best players from just £30. With over 90% of England’s population within two hours of a game, the tournament will truly belong to everyone and allow fans from all areas the chance to play their part in what will hopefully be a record-breaking summer for the women’s game.

The first chance supporters will have to apply for tickets is on 13 July 2021, via the Pre-Sale, presented by Visa. To ensure this priority access, fans can register their interest now at UEFA.com/womenseuro/ticketing. 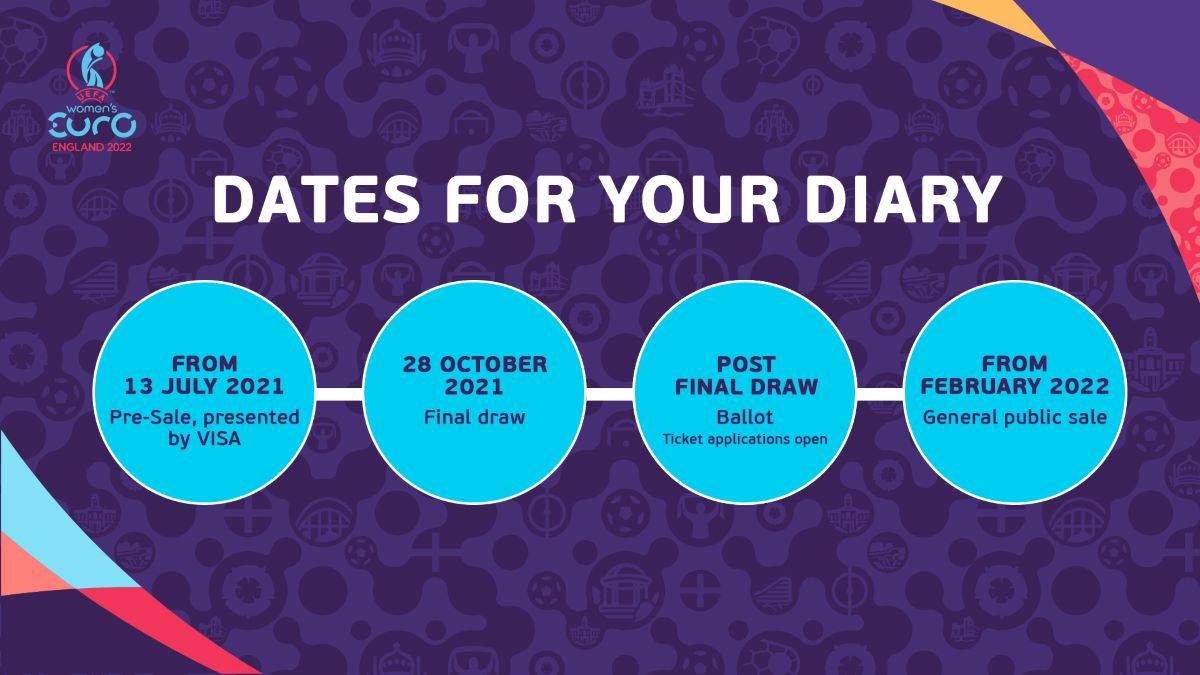 Together with UEFA, as a nation and host a clear ambition is held to deliver the biggest women’s football event in UEFA history, which is used to inspire long-term, sustainable positive change in women’s and girls’ football. Host cities are developing local strategies to make transformational changes in their communities which are designed to create a blueprint for the rest of the country and Europe.

The legacy programme shared today sets out the plans across the nine host Cities to deliver 500,000 new football opportunities to engage women and girls by 2024. Nationally, The FA are committing to several measures, such as ensuring that 75% of schools provide equal access for girls to play football within PE lessons and 75% of all grassroots football clubs offer at least one girls’ team with 1,000 clubs offering a complete accredited pathway for girls.

Across the nine host Cities these measures will result in 120,000 more girls playing in schools and clubs and 20,000 more women playing for fun and friendship by 2024. In addition, 300 newly FA-qualified female coaches will double the number currently involved across the host cities, with 350 new FA-qualified female referees officiating to ensure increased female participation in all areas of the game.  Find out more about how the tournament will help drive positive change within girls and women’s football at www.TheFA.com/WEURO2022/legacy.

Baroness Sue Campbell, EURO 2022 Board Member and Director of Women’s Football, The FA, said: “It has been a challenging year in so many ways, with mental and physical wellbeing hugely affected by the pandemic. The tournament and the city legacy programmes are a very real opportunity to positively change the impact restrictions have had on our activity levels and to bring us together through football regardless of our role we play within the game.

The long-term legacy ambitions will unlock the game for more women and girls across host cities and beyond with equal access for all girls to play football in school and clubs. We will also be working to create a more diverse workforce of coaches, referees and local leaders to deliver and organise football for their communities. Our vision will ensure inclusive, safe and welcoming environments for every woman and girl to play competitive or recreational grassroots football – irrespective of ability, age or ambition.

This ambitious legacy programme could not be possible without the ongoing commitment to the development of the women’s game from UEFA, The FA, our host cities, councils and supporting organisations and I would like to thank them for all their hard work to date.”

Chris Bryant, Head of Tournament Delivery, The FA, added: “We are aware of the huge opportunity we have to grow the women’s game here and across Europe. To have that legacy, we must ensure we first deliver a record-breaking tournament that captures the imagination, to provide those vital foundations. It is an exciting time as UEFA Women’s EURO 2022 really starts to take shape now, with the Pre-Sale, presented by Visa for tickets in July 2021. With 10 venues, nine host cities and over 700,000 tickets available there is a real opportunity for people to play their part in creating a special tournament with incredible footballing talent on display. With 16 of the best European Nations competing across 31 matches, we want to see full stadiums, generating an incredible atmosphere, so be sure to register for the Pre-Sale, presented by Visa so you don’t miss out on getting tickets.”

Nadine Kessler, UEFA Chief of Women’s Football, said: “Today marks another important moment in the build-up to what will be the biggest UEFA Women’s EURO ever and ground-breaking from start to finish. A moment that is there to draw attention to two strategically fundamental topics, ticketing and legacy. Priorities we need to get right, and we will get right. We are going to fill stadia, sell out matches, fans are going to come from all over England, the whole UK, Europe and beyond. And when we have achieved this, we have left the impression that was needed to amplify the efforts that have already gone into leaving a legacy in England and beyond. The legacy, for all of us, won’t stop with the final whistle at Wembley stadium on 31 July 2022. I am delighted to see that The FA has found great partners for their legacy programme and are treating this topic with a long-term vision to bring women into the game and provide environments they can thrive in. This Women’s EURO needs to become a benchmark and we all have our role to play in it. There is a unique chance to make a difference to our sport, at a critical time. So, let’s make it happen.”


The opening match of the tournament takes place at Old Trafford on 6 July 2022. The Semi-Finals will be held at Sheffield’s Bramall Lane and Milton Keynes’ Stadium MK ahead of the showcase Final at Wembley Stadium on 31 July 2022. Each venue, other than Old Trafford and Wembley, will host a minimum of three games each during the tournament.

The Pre-Sale, presented by Visa will run from 13 July until 10 August 2021. As part of the Pre-Sale, Visa cardholders will be given the opportunity to be among the first to purchase their tickets for the tournament, alongside fans that pre-register now at UEFA.com/womenseuro/ticketing. The public ballot will open following the draw which takes place on 28 October 2021 live on BBC, with tickets going on general sale from mid-February 2022.

Although, all are planning for full stadiums in summer 2022, a robust refund policy will be in place if fixtures are postponed, cancelled, have reduced capacity or a change of venue is introduced due to COVID.

A ticket resale platform will be available in 2022 for ticket holders to use and re-sell their tickets at face value pre-tournament to another fan. More will be communicated in the coming months.

Wales return to action tonight with a crucial UEFA Women’s EURO qualifying group game away to Norway. The hosts have won all four of their games ahead of the 5pm (UK time) kick off at […]

Newport County FC will be the venue for Wales final UEFA Women’s EURO 2022 Qualifying Round match. Jayne Ludlow’s side will face Belarus on Tuesday 1 December (KO 19:10), with the match televised live on […]

#WEURO2022 DRAW Group A Reaction: England’s Sarina Wiegman encourages fans to “Buy tickets! The crowd are going to be our 12th woman.”

England’s Head Coach Sarina Wiegman entering the stage, cradling the Women’s UEFA Euro trophy, was a cool sight on Thursday evening. There we no worries about silly superstitions of touching the silverware beforehand because she […]