Wales were 4-0 winners over the Faroe Islands in the UEFA Women’s European Championship Qualifying Group C.

Helen Ward opened the scoring at Rodney Parade on 33 minutes when put through by Jess Fishlock.

Natasha Harding hit a three-minute brace around the hour mark, the first after Rachel Rowe met the delivery into the box, the second a header which the goalkeeper let through her hands.

Lily Woodham came off the bench to complete the scoring within five minutes of her debut, nodding home Rowe’s cross.

Wales head coach Jayne Ludlow told faw.cymru: “We started a little bit slower than we would have liked but I’m really pleased with the result and the performance.”

Full of praise for Lily Woodham, she added: “Lily is one of our age group players – she’s been with us since she was 12 years old and it’s fantastic to see her progression.”

Woodham commented: “I’ve been with the age groups for years and it’s been a dream of mine for years to make my debut, I can’t quite put it into words how much it means to me. I’m buzzing to get my debut and a goal was just a bonus really! I’m over the moon.”

Another player for whom it was a special evening was Sophie Ingle, who clocked up her 100th senior cap for Wales. 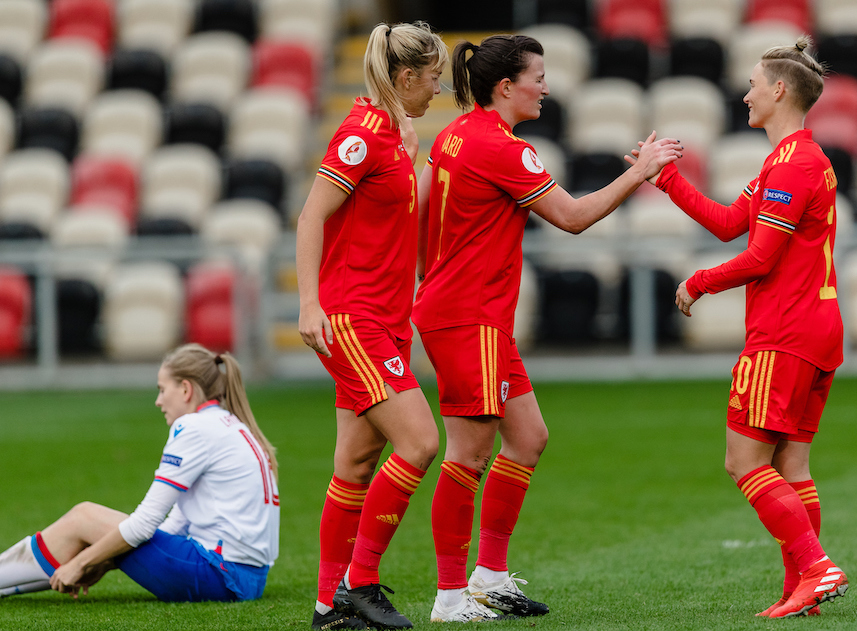 Helen Ward scores and celebrates with Gemma Evans and Jess Fishlock. (Pic by John Smith/FAW)Ludlow’s side next face a crucial home tie with group leaders Norway next Tuesday.

GROUP B – Another victory and clean sheet for Denmark

Denmark defeated Israel 4-0 on Wednesday but had to wait for a second-half Pernille Harder brace to put them in command. Harder struck twice in seven minutes, after which Irena Kuznezov conceded an own-goal and Sofie Pedersen completed the scoring. It was an eighth straight win for the Danes, who have yet to concede a goal but next visit Italy – who also boast a 100% record – on Tuesday

Sweden thrashed Latvia to got three points clear of Iceland, whom they host next week. The goals were shared around with five different scorers in the first half; Lina Hurtig netted two minutes in, Anna Anvegård and Olivia Schough made it 3-0 after 13 minutes, with Magda Eriksson and Pauline Hammarlund then adding one each. Hammarlund later got her second and then Filippa Curmark made it 7-0.

Greece edged Montenegro 1-0, Eleni Markou with the goal just six minutes from the end. A second win for the Greeks has them six points short of second-placed Republic of Ireland, with two games to go each.

Wales missed out on seventh place at the Cyprus Women’s Cup, beaten on penalties by Austria after normal time ended with the scores level at one apiece. Gwen Davies and Kylie Nolan were given their […]