Terminally ill Birmingham City Girls’ coach Dean Prentice has launched a crowdfunding campaign to raise £20,000 to pay for a wonder drug he says could extend his life.

The 28-year-old, from Sheldon, in Birmingham, was first diagnosed with bowel cancer in 2018 and given the bombshell news in March 2020 that the condition was terminal.

The father-of-one, who coaches the U9s and U10s girls at his beloved Birmingham City, says a drug called Bevacizumab, which has the trade name Avastin and cuts off a tumour’s blood and oxygen supply, could significantly extend his life.

Unfortunately the drug, which costs £1,500 a treatment, isn’t widely available on the NHS, forcing Dean to launch a crowdfunding campaign to raise an initial £20,000 to fund his treatment.

Dean said: “My son Kyton will be four in July and I just want to be around for as many birthdays as I can. As a football coach the analogy I would make is I’m praying for a shock result but hoping for extra time.  I believe Bevacizumab can give me that extra time.

Dean said he had the perfect life of spending time with his son Kyton and football coaching until cancer turned his life on its head.

Recalling what happened he said: “I’ve always led a healthy life. I’d never smoked, went to the gym every day and had been vegetarian for two years. I’ve been coaching at Birmingham City for seven years, working within the academy set-up, the community and, more latterly, the girls.

“In July 2018 I took part in a charity skydive and I’d never felt better. Then from mid-October 2018 I started experiencing a dull ache on the right side of my stomach and began bringing back food and drink.

“The doctors thought it could be stress-related and initially treated me for acid reflux. By December I was taking a coaching session and I was in so much pain I couldn’t stand up.

“I took myself straight to Heartlands Hospital in Birmingham and they admitted me for tests. I had cameras shoved in me, MRI scans and various blood tests.

“On December 18th they said I had cancer.  People react in different ways when they hear the word ‘cancer’. I was 26 and my first thought was that my son would grow up without a father. That’s the hardest part.”

Tests revealed that the primary cancer was in his bowels and was the size of a tangerine but it had spread to his spleen and his left kidney.

“I started two-week cycles of chemotherapy at Solihull Hospital in January 2019 in the hope that they could shrink the cancer to make it worth operating on,” he said.

“The early signs were good. In March I stopped the chemo and a scan found the primary cancer had shrunk and hadn’t spread. The word they used was ‘controlled’. I was over the moon.

“I underwent extensive surgery at Good Hope Hospital in Birmingham in July 2019 and three months later a scan couldn’t find any cancer. I thought it was a miracle. I was able to carry on with the football coaching which I love.

“But another scan in March 2020 revealed that the cancer was aggressive and had spread to my liver. They said they couldn’t operate because the risk was too high. Being told my condition was terminal was the saddest day of my life. I cried and I cried and I cried. I kept thinking of my son.

“However I’m a positive person and I was determined to take the positives out of the situation. I was told I would never be cured so my approach was to fight this and slow the spread down in order to maximise my life expectancy. I will always continue to fight.”

Dean underwent a procedure in June called a nephrostomy, which involved fitting a catheter into his body to relieve the pressure from his kidneys. Without it he could have died of kidney failure.

It was around this time that he became aware of the drug Bevacizumab, which has the trade name Avastin. It can help slow down the growth of the cancer and preserve Dean’s kidney function.

“Nobody knows how long the Bevacizumab could extend my life but it could be years,” he said. “That’s the goal.”

The problem is it’s not routinely available on the NHS and a year’s worth of treatment costs £36,000.

As a result Dean launched a crowdfunding campaign to raise an initial £20,000 and he’s already raised £10,000 in less than four weeks. 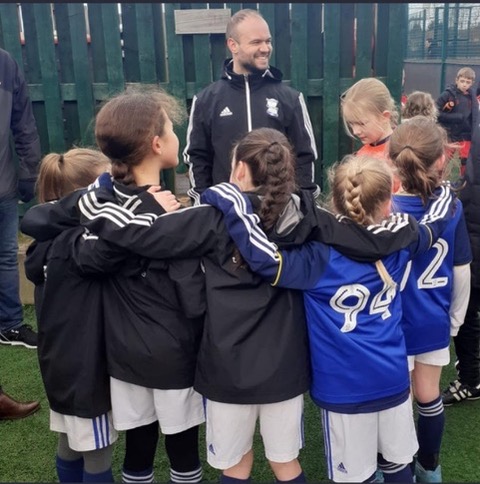 “Birmingham City have been brilliant and have provided me with more support than I could have imagined,” he said. “I work in the female side of the game and a number of the Birmingham City Women players have been very supportive on social media including Hannah Hampton, Connie Scofield and Kerys Harrop.  A number of the men have donated shirts to be auctioned off. The whole Blues family has come together. A lot of other people from the world of sport have also helped.”

Dean, who lives with his new partner Kimberley, said: “To be honest I feel guilty asking anyone for a penny but the support I’ve received has been overwhelming and enabled me to start treatment on June 25.

“I found  out  today (July 1) that the cancer had spread to my left leg which is devastating. What I’m hoping for is to be able to continue to be able to enjoy life without being in pain and to see my son for as long as possible.

“If I became too ill and the money couldn’t be used to pay for my Bevacizumab treatment I would make  sure it goes to charity to help other people in my position. I’m not here to criticise the NHS. My consultant has been beyond brilliant.”

Dean said Covid-19 and the enforced lockdown had made a difficult situation even tougher.

“Since March the only time I left the house was for hospital appointments,” he said.  “I wasn’t able to see my son for four months and that was tough but I’m an optimist, which is just as well because I’ve taken up golf!

“I know the odds are against me but I owe it to Kyton to keep fighting with every breath in my body.”

A spokesman for University Hospitals Birmingham NHS Foundation Trust said: “The Trust does use Bevacizumab but the use is restricted by NHSE to certain cancers. Without an agreed NHSE commissioning policy we are unable to prescribe Bevacizumab for patients under NHS care with other types of cancer that are not included in the NHSE list of indications.”

To find out more go to Dean’s JustGiving page at https://www.justgiving.com/crowdfunding/deano-prentice

👏 @ucfbuk are hosting their Women in Sport Conf