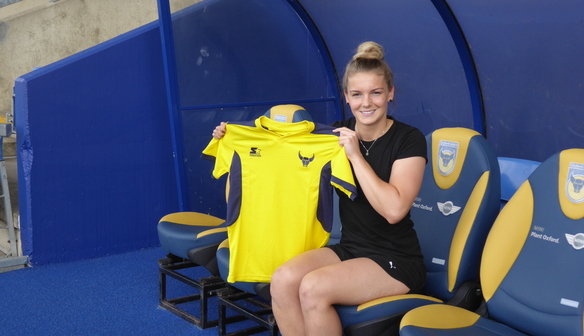 Hines originally signed for the U’s in 2013 after time in the States and Oxford say she was a vital part of the squad before making the move to full time football at  WSL 1 club Reading FC in 2015.

She told oxfordunitedwfc.co.uk: “I’m really excited, the last time I was here I really enjoyed my football and although some things have changed the club are going into the right direction. The professionalism and the foundations of the club are very good, I’d go as far as saying one of the most professional in the league and I’m really looking forward to meeting the girls and starting”

“My experience playing WSL 1 football, playing against international players and playing full time is something I will definitely bring to the team and help use help the club stay where it belongs”

First team manager Andy Cook told commented: “To get Kayleigh back to this club is a special moment for everyone. I was up at Sunderland when Reading played them. Kayleigh came on and effected the game positively and helped Reading create chances. Since I’ve been here, players and staff that know her spoke highly of her and to bring her in now is fantastic.

“I did all I could to make the move happen, so I’m pleased she decided to come back and with me and the new set up here. I know she had a lot of interest in her, so to capture her signing for this season is another statement of intent for us and show people Oxford aren’t here just to make the numbers up any more.”

Top of the bill in The FA Women’s National League is Southern Premier leaders Crawley Wasps at home to Oxford United who have yet to drop a point. Sunday 29 September (2pm) NORTHERN PREMIER Burnley […]

Oxford United have announced their second January signing as striker Cheryl Williams joins. Williams, follows close on the heels of last week’s signing of centre-half Gemma Sims in signing on for United from Barton Rovers. […]