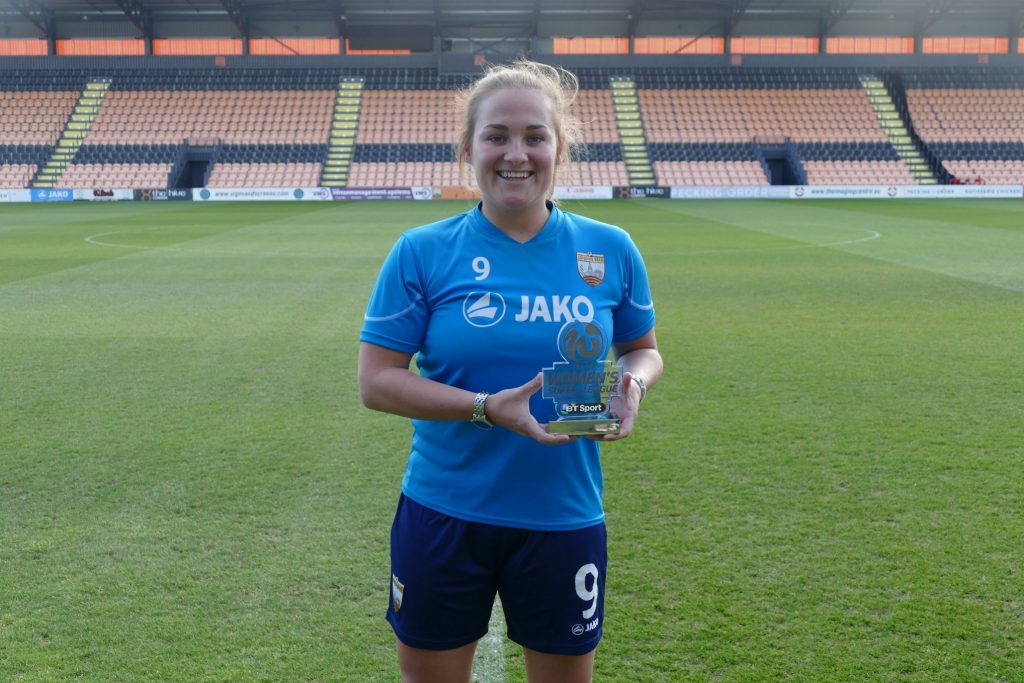 London Bees’ Katie Wilkinson has been selected as the FA WSL 2 Player of the Month for April.

New signing Katie Wilkinson has hardly put a foot wrong since her move to London Bees at the start of the year. The striker has found the net in every London Bees game throughout April including an early goal against former side Aston Villa. Wilkinson also grabbed a brace against Watford and strikes against Brighton & Hove Albion, Durham and Doncaster Rover Belles.

Wilkinson fought of some competition from a shortlist including Aston Villa’s Ebony Salmon and Tottenham Hotspur striker, Sarah Wiltshire. Seventeen-year-old Salmon continued to impress in the FA Women’s Super League 2 with three goals in four games,while Spurs forward Sarah Wiltshire scored a stunning strike against Sheffield before rounding off the month with a goal in a 6-3 victory against.

Presented with the FA WSL 2 Player of the Month award, London Bees’ Katie Wilkinson said – “My most memorable moment in April has to be scoring against Villa and winning the game. I grew up at Villa and scoring the type of goal that I did at the Hive filled me with a lot of emotion after working so hard to come back from a serious injury. It’s thanks to Luke and the team that have shown an amazing amount of belief in me that has helped me start to play with confidence again. The team morale boosts players confidences and helps individual performances, it has really highlighted to me what a great team we have at Bees.”

Fixtures are released for what is expected to be the biggest year ever for the Barclays FA WSL and FA Women’s Championship.  With Sky Sports and the BBC on board as host broadcasters, women’s football […]

Aston Villa twice equalised to draw 2-2 with Reading in the Barclays FA Women’s Super League, the second leveller on 91 minutes. The Royals were ahead inside three minutes of Saturday’s fixture at Walsall FC, […]

#FAWSL: Staggered schedule of televised and streamed matches this weekend