Sarina Wiegman has named her final squad of a memorable year as England prepare to face Japan and Norway in Spain.

The 25-player group will take on their fellow 2023 FIFA Women’s World Cup finalists at the Pinatar Arena football centre in Murcia. The fixtures see Japan up first on Friday 11 November (7pm GMT), followed by a meeting with Norway on Tuesday 15 November (7pm GMT).

Included in the squad are uncapped young duo Maya Le Tissier and Katie Robinson, while Alessia Russo returns after missing the October camp with injury. Captain Leah Williamson is still absent having also sat out last month’s 2-1 defeat of the United States at Wembley Stadium and 0-0 draw with Czech Republic in Brighton.

Niamh Charles and Jordan Nobbs also come back into contention.

The head coach said: “These will again be two good challenging games for us which is just what we want and need at this stage. We will come up against one team in Norway that we know plenty about and who are building again under Hege.

However, before then we have a tough match against a Japan, who are bringing a different style of play which is a good preparation for the World Cup.

“We are hoping the conditions in Spain will help us to maximise our training as every session counts, along with the matches of course, in helping us to be ready for the World Cup. We cannot waste a minute and I am looking forward to getting back on the grass. We have some new players to look at as we know we have so much competition for places coming through.” 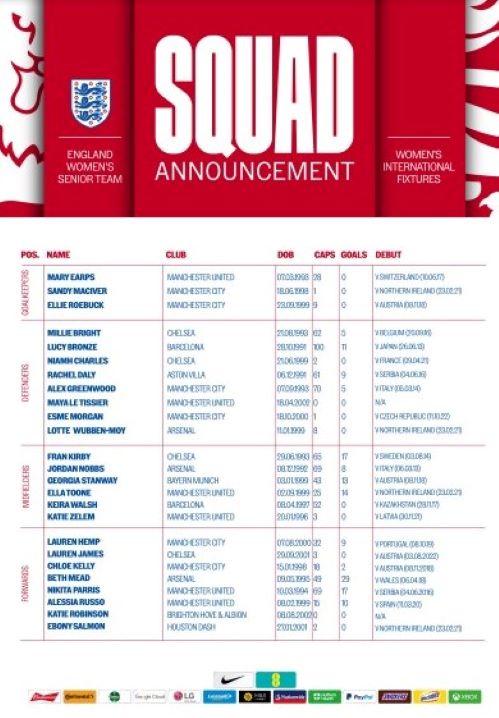 IN CONVERSATION: A catch up with Lucy Bronze as she returns to #Lionesses camp for Germany friendly

Lucy Bronze, England’s most decorated female footballer, is back in England with Manchester City and back with the Lionesses for her first camp since December, reports GLENN MOORE. Injury ruled the 28-year-old out of the […]

Karen Carney and Mel Lawley have been called in to the England squad after Keira Walsh and Fran Kirby withdrew, reports thefa.com. Walsh and Kirby, who both picked up slight knocks during weekend action for […]

All Lionesses #FIFAWWC2019 warm-up games live on the BBC

Every England Women’s match in the build-up to the 2019 World Cup will be broadcast live across the BBC, reports TheFA.com. The Lionesses’ first match of the calendar year is against Brazil at the annual […]