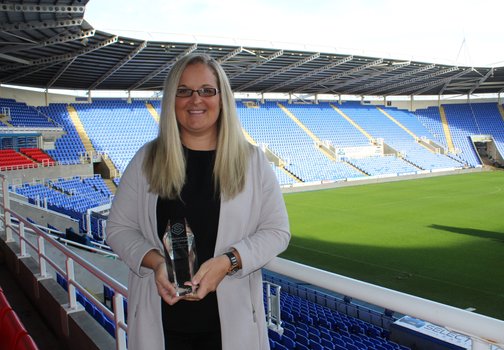 Chambers led Reading to victories over Bristol City, Brighton & Hove Albion and Everton in November to earn her first Manager of the Month award of the season.

On receiving her trophy from Thomas Lyte, Chambers told the LMA: “It is a real honour to receive this award. It’s definitely not credit just to myself, my team, the players and staff have had a massive input into our achievements over November.” Stoney’s Manchester United side reached the summit of the league in November following the defeat of fellow title contenders Tottenham Hotspur, as well as excellent performances against Crystal Palace and Millwall.

Upon receiving her Thomas Lyte trophy Stoney said: “It’s incredible, I’m really privileged to have this but it’s not really my award, it’s a team award. I’ve got some incredible staff here and twenty-one amazing players that make things like this possible.”

“It was a good month; all the training and hard work over the last twenty weeks paying off, it’s a credit to the players, they’re very diligent in their approach, and my backroom staff who work relentlessly to make sure everything is right, so players can perform.”

Chair of the LMA panel Marieanne Spacey-Cale said: “In The FA Women’s Super League, Kelly’s Reading side put some clear daylight between the teams below them with a perfect month in November.

“Taking nine points from three games meant they jumped two places into fourth and Kelly will be challenging her team to maintain this form into the second half of the WSL season.”

“Also, emphatic wins against Crystal Palace and Millwall enabled them to go clear at the top of the table to continue Casey’s hugely impressive start to her career as a manager.”

The LMA has awarded Arsenal’s Joe Montemurro the FAWSL Manager of the Month trophy for October, while  the FA Women’s Championship award went to the management team of Durham. Montemurro’s Arsenal continued their perfect start to […]

Former England captain, Casey Stoney, could be set to become manager of the new Manchester United women’s team, report BBC Sport. Stoney, 36, won 130 caps for the Lionesses and has been assisting head coach […]

Manchester United have today announced the appointment of Casey Stoney as the Head Coach of the club’s new professional women’s team. A veteran of 130 appearances for England, Stoney retired from playing earlier this year and […]