At the end of 2019 we looked back at the events of the past ten years with goalkeeper Karen Bardsley, then England’s longest serving player. The six-foot-tall Californian with parents from Stockport – who announced that she will be retiring from the game at the end of this season – has been England’s first choice goalkeeper for all five major tournaments this decade, including three World Cups. Despite being plagued with injuries – a broken collarbone, broken legs and a recent hamstring operation (which ultimately called time on her career) – 35-year-old Bardsley has also won all the domestic competitions with Manchester City.

Here’s her reflections on that decade, talking to SOPHIE PENNEY… (this article first appeared in #SK58 in Jan, 2020) 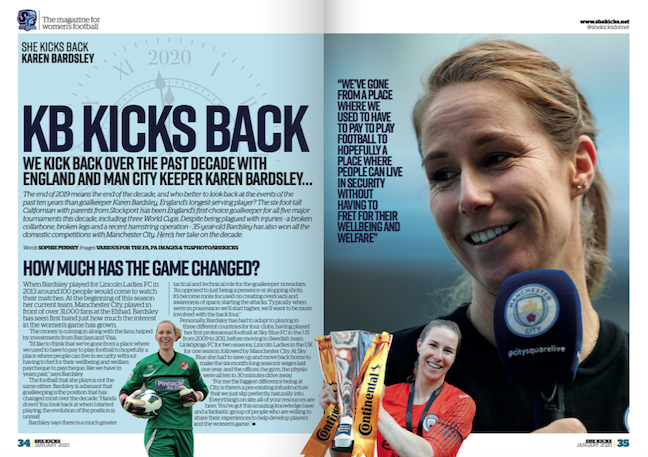 How much the game has changed:

When Bardsley played for Lincoln Ladies FC in 2013, around 100 people would come to watch their matches. At the beginning of this season, her current team, Manchester City, played in front of over 31,000 fans at the Etihad. Bardsley has seen first-hand just how much the interest in the women’s game has grown.

The money is coming in along with the fans, helped by investments from Barclays and Visa.

“I’d like to think that we’ve gone from a place where we used to have to pay to play football to hopefully a place where people can live in security without having to fret for their wellbeing and welfare, paycheque to paycheque, like we have in years past,” says Bardsley.

The football that she plays is not the same either. Bardsley is adamant that goalkeeping is the position that has changed most over the decade:

“Hands down! You look back at when I started playing, the evolution of the position is unreal!”

She says there is a much greater tactical and technical role for the goalkeeper nowadays. “As opposed to just being a presence or stopping shots, it’s become more focused on creating overloads and awareness of space, starting the attacks. Typically when we’re in possession, we’ll start higher, we’ll want to be more involved with the back four.”

Personally, Bardsley has had to adapt to playing in three different countries for four clubs, having played her first professional football at Sky Blue FC in the US from 2009 to 2011, before moving to Swedish team Linköpings FC for two seasons, Lincoln Ladies in the UK for one season, followed by Manchester City. At Sky Blue, she had to save up and move back home to make the six-month-long season’s wages last one year, and the offices, the gym and physio were all 10-30 minutes’ drive away.

“For me, the biggest difference being at City is there’s a pre-existing infrastructure that we just slip perfectly, naturally into. Everything’s on site, all of your resources are here. You’ve got this amazing knowledge base and a fantastic group of people who are willing to share their experiences to help develop players and the women’s game.”

Key events of the decade

“That was my first World Cup, so it was an incredible moment for me personally, but I felt we underachieved. It was crazy; in extra-time in the France game, it was just attack after attack after attack, and I just remember I had to make a lot of saves. When it came to the penalties, I saved the first one and I was buzzing, but penalties suck. It’s the worst way to win or lose really, but for us to miss two really crucial penalties, especially seeing as I saved the first one, I was like, ‘What else can I do?!’ So that was a really hard one.”

2012 Olympics – A home Olympics sees Team GB women’s team compete for the first time, losing in the quarter-final to Canada

“It was the first time that I could remember feeling like we were getting the national attention. It gave us a global spotlight. I think we were still disappointed not to do better, but our warm-up game was a double-header with the men. That for me was amazing, because one of my idols, Ryan Giggs, was there. It was a bit surreal, because I think you always kind of put them on a pedestal and you don’t think they actually exist in real life. You’re like ‘is this a wax figurine?’ It was cool to share that with them. I finally felt that we had the respect that we deserved, because in my eyes – I’ve always felt this way – we’re still doing the same job.”

“For me, it was just a plethora of disappointing moments. I personally really underachieved during that tournament, and I think psychologically, I was not in a good place when it came to coping with that. I think I had a lot of self-doubt going into that tournament. It was the first time in England that there was attention around women’s football, players, contracts. It was the first time money had started to increase and get bandied about. I can only relay to you my own experience but it seemed like egos started to creep in a little bit and it was different. I don’t think that we had made many improvements on 2011 and 2012, and a lot of the other nations had at the time.”

2015 World Cup – England take home the bronze medal, missing out on the final by an own goal in injury time

“It’s bittersweet. For me, it’s an overwhelmingly positive experience, purely on my own personal performance. I think one of my proudest moments was against Norway. We were absolutely under the cosh for the first half. I remember being one-on-one with Ada Hegerberg and I made a spread save in a crucial moment, and I just remember thinking, ‘Yeah! We’re gonna win this game’; I was buzzing. From a team perspective, I think we overachieved massively, but it was probably disappointing because we were so close to being in a final and potentially winning. The own goal really doesn’t leave nice memories, however, it was more easily forgotten by the fact that we beat Germany for the first time ever in history.”

“That was probably my most memorable year. Obviously, we won a lot of stuff and we were really successful, but the most important thing for me was the team cohesion that we had, and the group of people that we had and what we went through. We dealt with a death in the team; we really had to pull together to help each other through it. It became more than just us. When someone dies, it’s life and death, isn’t it? So, it’s more than just football, ‘okay, you win, you lose’; someone died. That’s something that I’ll never forget. That has to be one of the most poignant memories that I have in terms of perspective, in terms of what’s really important.”

2019 World Cup – England lose a gripping semi-final to the United States watched by 11.7 million people in the UK

“From a players’ perspective, the tournament didn’t feel as big as it did in 2015. In Canada and North America, women’s football is absolutely massive, so there were constantly people around, constantly talking about it, constantly asking for pictures. Whereas, in France, there were people around but they weren’t constantly like ‘hey’ this and that. For me, I didn’t realise how big it was until I got home. My relatives were saving all of the newspapers and things like that. I think it was a great World Cup in terms of raising the expectations of the world when it comes to women’s football, raising the expectations of England and getting people behind the team and changing perceptions in regards to female sport in general.” 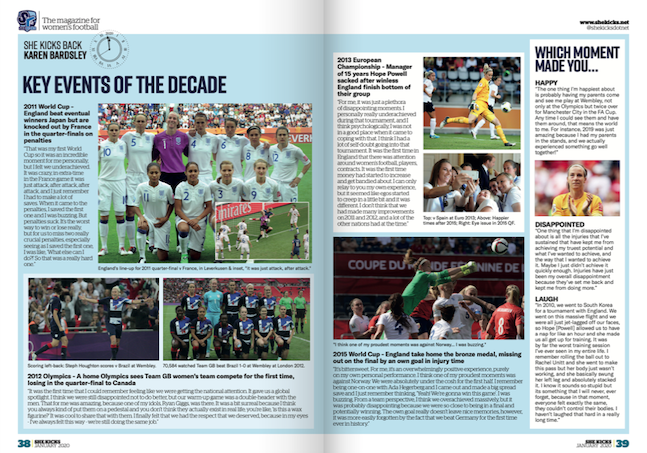 Which moment made you most…

“The one thing I’m happiest about is probably having my parents come and see me play at Wembley, not only at the Olympics but twice over for Manchester City in the FA Cup. Any time I could see them and have them around, that means the world to me. For instance, 2019 was just amazing because I had my parents in the stands, and we actually experienced something go well together!”

“In 2010, we went to South Korea for a tournament with England. We went on this massive flight and we were all just jet-lagged off our faces, so Hope [Powell] allowed us to have a nap for like an hour and she made us all get up for training. It was by far the worst training session I’ve ever seen in my entire life. I remember rolling the ball out to Rachel Unitt and she went to make this pass, but her body just wasn’t working, and she basically swung her left leg and absolutely stacked it. I know it sounds so stupid but its something that I will never, ever forget, because in that moment, everyone felt exactly the same, they couldn’t control their bodies. I haven’t laughed that hard in a really long time.” 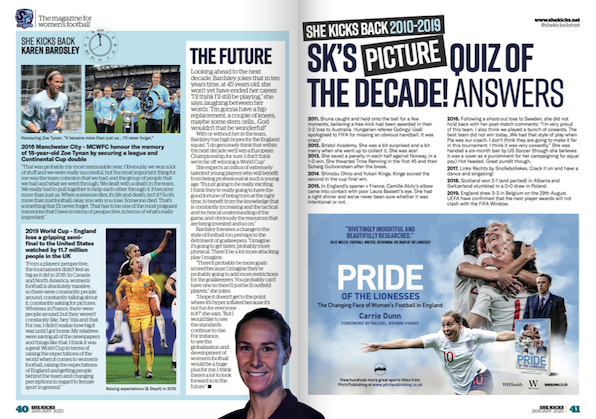 Looking ahead to the next decade, Bardsley jokes that in ten years’ time, at 45 years old, she won’t yet have ended her career. “I’ll think I’ll still be playing,” she says, laughing between her words. “I’m gonna have a hip replacement, a couple of knees, maybe some stem cells… God, wouldn’t that be wonderful!” (SK Ed: IF ONLY THIS COULD HAVE COME TRUE.)

With or without her in the team, Bardsley has high hopes for the England squad. “I do genuinely think that, within the next decade, we’ll win a European Championship, for sure. I don’t think we’re far off winning a World Cup.”

She expects an influx of extremely talented young players who will benefit from being professional at such a young age. “It’s just going to be really exciting. I think they’re really going to have the good fortune of being born at the right time, to benefit from the knowledge that is constantly increasing, and the tactical and technical understanding of the game, and obviously, the resources that are being invested and so on.”

Bardsley foresees a change to the style of football too, perhaps to the detriment of goalkeepers. “I imagine it’s going to get faster, probably more physical. There’ll be a lot more attacking play, I imagine.

“There’ll probably be more goals scored, because I imagine they’re probably going to add more restrictions for the goalkeepers. You probably can’t have one so there’ll just be 11 outfield players,” she jokes.

“I hope it doesn’t get to the point where it’s hyper-inflated, because it’s not fun for everyone, is it?” she says. “But I would like to see the standards continue to rise. For instance, to see the globalisation and development of women’s football would be a huge plus for me. I think there’s a lot to look forward to in the future.”

Doncaster Rovers Belles have confirmed that head coach Emma Coates will be leaving the club at the end of October to take up a role with the FA. She will leave the club to take […]

Manchester City’s England goalkeeper, Karen Bardsley, has agreed a new two-year deal with the club that will see her remain at City until the end of the 2020/21 season. Speaking about her contract extension, Bardsley […]