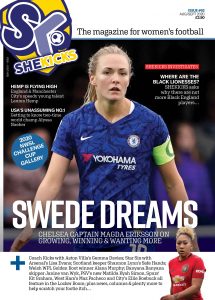 Included in this issue:

MAGDA ERIKSSON (Chelsea/Sweden) Chelsea’s quietly classy defender and a voice for social change, added another medal to her cabinet this season.

LAUREN HEMP (Man City/England) – We last featured the seemingly fearless and exciting young attacking prospect while she was starring for Bristol City. We catch up with the Manchester City and England forward as she looks to establish herself at the top.

ALYSSA NAEHER (Chicago Redstars/USA) – A rare in-depth interview with the USWNT’s shy World Cup-winning goalkeeper on the patient journey to claiming the No.1 jersey and saving THAT penalty from Steph Houghton.

WHY HAVE SO FEW BLACK WOMEN PLAYED FOR ENGLAND?: Glenn Moore explores why less black women are wearing the ‘three lions’, compared to the much higher proportion of black men who have been capped by England.

Click HERE (or on the cover image above) to buy your copy.