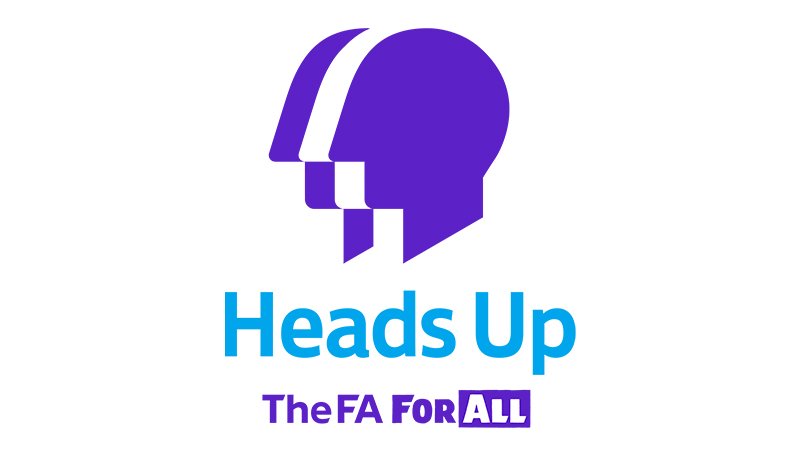 Men’s and women’s football is coming together this weekend to kick off a conversation around mental health, in a major unifying moment for the sport.

Football is coming together this weekend with the ambition to kick off biggest ever conversation around mental health, as new research shows just 1 in 3 football fans regularly talk about mental health with their friends.

Spearheaded by HRH The Duke of Cambridge, the season-long Heads Up campaign aims to harness the influence and popularity of football to normalise the conversation around mental health, working closely with charity partners Mind, CALM and Sporting Chance.

The ‘Heads Up Weekends’ will highlight the power of talking as a way to support one another and dispel stigma, with activity planned at fixtures across the men’s and women’s football calendar.

Over 8th – 9th February and 14th – 17th February, clubs of all levels will feature Heads Up branding across stadiums, programmes and player kit, in a major unifying moment that aims to get the nation talking about mental health. Over the weekends, clubs will also be releasing their own short films featuring players talking about mental health and showcasing the work they do to improve mental health in their communities. Meanwhile The Scottish FA are also supporting Heads Up over the 8th – 9th February, with activity planned at eight Scottish Cup Fifth Round fixtures.

To officially kick off the Heads Up Weekends, and marking Time To Talk Day on Thursday 6th February, The Duke of Cambridge today joined players, managers, representatives and fans from the men’s and women’s game to take part in a table football tournament and a mental health conversation at Heist Bank in London.

It comes as a new Heads Up survey of 2,014 football fans, carried out by Censuswide, showed:

• Football is the number one topic of conversation (75%) between fans and their friends
• However, only 1 in 3 (34%) football fans regularly talk about mental health with their friends – with male fans much less likely to do so (27% of male respondents, compared to 47% of women). Overall, male football fans were over three times more likely to talk about football than mental health with their friends (83%, compared with 27%).
• Meanwhile, 40% of football fans find it easiest to talk about their mental health while busy with other activities – such as while walking or running, driving, going to the pub, or watching sports with a friend. Meanwhile 32% would find it easiest to have a face to face conversation at home with no distractions.

Men’s and women’s football is now coming together to call on everyone to talk more about mental health in order to normalise the subject and help remove the stigma that prevents many – particularly men – from speaking out.

In a message included in every matchday programme over the Heads Up Weekends, HRH The Duke of Cambridge wrote:

“Imagine if we talked about mental health as much as we talk about football…. Many of us won’t go a day without talking about it. And whatever team we support, every single fan, player and manager has one thing in common – we all have mental health, in the same way that we all have physical health. And we will all face ups and downs in life which will affect it. It’s time we start taking our mental fitness as seriously as we do our physical fitness, and that starts with talking.”

Godric Smith, Chair of Heads Up and Director of Cambridge United, said:

“This is an important national moment for mental health awareness, with the whole of the football family coming together to help kick off a big conversation on the issue. Football is already doing fantastic work across the UK to end the stigma surrounding mental health, and the Heads Up Weekends will unite the whole football community behind the issue in a powerful and visible way. We are very grateful for the support and leadership right across the game.”

“We are proud to support the Heads Up campaign to raise awareness of the importance of talking about mental health. Our clubs are already doing vital work in this area, whether that is within academies or working closely with local communities and schools to support mental wellbeing. All our clubs, their staff, managers and players are backing this campaign to help remove stigma and encourage fans to talk openly about their own mental health. Football has a major role to play and we hope that by joining the EFL and the FA for these weekends of action we can change the conversation.”

“Through our ground-breaking partnership with Mind, the EFL and its Clubs have worked hard to improve the approach to mental health in football and wider society, over the past two seasons. Football provides a platform like no other to raise awareness and tackle society’s biggest issues and we’re proud to offer our support to the Heads Up campaign, as football comes together to further encourage the conversation around mental health. I look forward to seeing the impact over the two weekends.”

“It’s significant that clubs across the men’s and women’s football pyramid are uniting together around such an important societal issue. Over recent years the women’s game has been home to inspirational role models who have spoken with courage about their mental wellbeing and now because of the Heads Up campaign and the excellent work conducted by the leagues and clubs, we hope that these individuals are no longer the lone voices but part of a societal change for us all to speak more openly about mental health. We’re grateful to all our clubs in the Barclays FA Women’s Super League, FA Women’s Championship and FA Women’s National Leagues for their unequivocal support and look forward to the positive change that this weekend will have.”

In January, Heads Up teamed up with PHE’s Every Mind Matters in a historic first to delay all matches in the Emirates FA Cup Third Round by 60 seconds, to encourage fans to ‘take a minute’ to start looking after their mental health. A powerful one minute film narrated by The Duke of Cambridge and featuring Frank Lampard, Harry Maguire, Alex Scott, Dele Alli, Jordan Pickford, Callum Hudson-Odoi, Son Heung-Min, Hamza Choudhury and Slaven Bilic, was played out in stadiums across the country. The film urged football fans to complete the ‘Every Mind Matters’ quiz and get their own ‘Mind Plan’. The quiz asks people a few questions about how they’re feeling before giving them their own personalised self-care plan, which includes simple, practical actions designed to help people stay on top of their mental health and prevent common concerns from worsening.

It has now been confirmed that the collaboration saw 87,417 people get their own personalised ‘Mind Plan’ from Every Mind Matters over the Third Round Weekend (3rd to 6th January); more people than attended last season’s sold out Emirates FA Cup Final.

The Heads Up Weekends take place over 8th – 9th February and 14th – 17th February. Fans are encouraged to join the conversation using #KickOffAConversation and #HeadsUp.

Find out more and get tips from Heads Up’s charity partners (Mind, CALM, Sporting Chance and Heads Together) – visit www.headstogether.org.uk/Heads-Up.

Those wanting immediate support can also text ‘HeadsUp’ to 85258 to connect with a trained crisis volunteer – a service run by ‘Shout’ and powered by Crisis Text Line, which is available 24/7 and free to text from most mobile networks.

The women’s game joins the Premiership and EFL in supporting the Heads Up campaign, with unanimous backing from the women’s professional Board, leagues and clubs. Launched by The FA and spearheaded by HRH The Duke […]