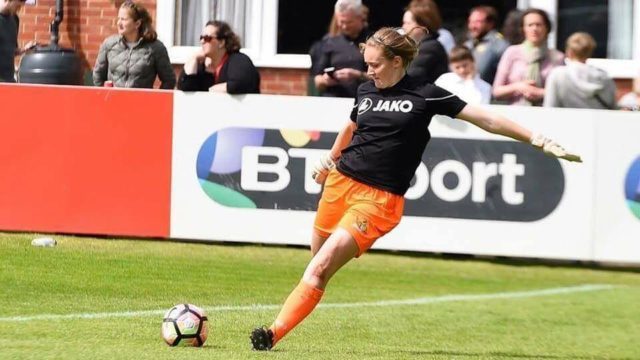 Davies started out at the Cambridge United Centre of Excellence and from a young age was on the international scene having been called up to several England training camps.

Her senior career started to take off when she joined WSL 2 side London Bees in 2015 and made her first team debut that year. A major career highlight was reaching the semi-final of the 2016 Continental Cup where they went on to beat Chelsea on penalties, with Davies playing a key role within that victory.

Since then, she has had several call ups for Wales, represented English Universities and after impressing at Leeds, was picked up by Doncaster, where she has made a handful of appearances.

“It’s great for the club to add a player of such stature and yet again it shows just how much the club has progressed in the last two to three years, to be attracting players with such CVs and experience.

“It’s an area we felt we needed to add competition for places as our current number two from last season is still out injured and work occupies a lot of her time and so going into the Premier League this year, we felt we couldn’t risk trying to get by with potentially one experienced keeper.

“We do have a great keeper in Beth Seasman, so Davies will have to work hard to prize the number one spot from her as Seasman won’t want to give it up without a fight.

Davies said of her move:

“Coming off the back of promotion to the Women’s Premier League North, Guiseley are in a great position with an ambitious and driven team of players and staff, so I hope I can contribute to the further success of the club.

“They are a great club to be a part of. The girls have all been so welcoming and I’m really enjoying pre-season training, so I know that I’ll be happy here.”

Goalkeeper Bethan Davies has made a permanent move to FA Women’s National League North side Guiseley Vixens, following a loan spell at the end of last season from WSL 2 champions Doncaster Rovers Belles. A […]

The FAWPL Northern Division side have added Charlotte Higginson who has played for borth England U-17s and U-19s, plus Naomi Chadwick who represented the Young Lionesses in the U-17 World Cup in New Zealand. Higginson, […]

Game over for Guiseley Vixens

FA WNL Northern Premier Division side, Guiseley Vixens, are sadly to call it a day due to difficulties in funding despite their best ever league season. In a statement on the Guiseley AFC website, the […]