Blackburn Rovers and Leicester City WFC meet in the League Cup Final, while Cambridge United, Leyton Orient and Poole Town all get to play at their respective parent club’s ground. 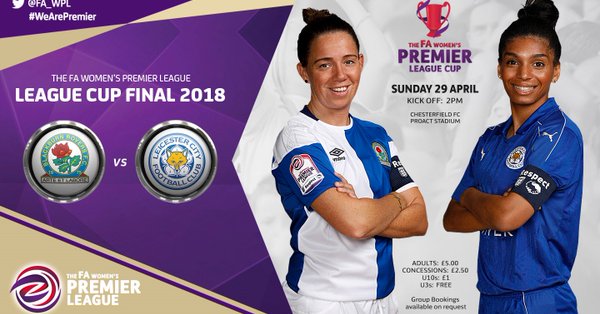 The League Cup final is meeting of the clubs currently second and third in the Northern Division, with Blackburn making it through after falling at the semi-final hurdle in the last two seasons. Although Rovers are well placed to retain the league title, their one defeat so far in 2018 did come against Leicester City, for whom Sophie Domingo grabbed a late winner.

Meanwhile, back in league action, Middlesbrough can extend their Northern Division advantage at mid-table Fylde and there’s a basement battle between Wolves and Guiseley. West Brom welcome Derby and Nottingham Forest’s game with Bradford is being played at the Lee Westwood Sports Centre.

Crystal Palace are likely to lose their Southern leadership, with second-placed C & K Basildon playing Portsmouth and Charlton in third away to QPR. Chichester are a point behind mid-table visitors Coventry while West Ham welcome Lewes.

TNS take on Midlands champions Loughborough Foxes as they chase second place, which is also sought after by Sheffield United, Burton and Radcliffe, who are all on their travels, while Leicester City Ladies are home to Long Eaton.

Hull host Brighouse in a Northern Division 1 title ‘six-pointer’ and Crewe face Newcastle less than 48 hours after winning the Cheshire Cup. Bolton entertain bottom of the table Barnsley, with Chester le Street challenging a Leeds side just a point off the foot.

Plymouth will move within three points of South West leaders Southampton WFC if they beat Maidenhead, Southampton Saints have home advantage over St Nicholas and Poole play Keynsham at the Black Gold Stadium.

#FAWPL : MK Dons and Plymouth Argyle on course for promotion

FAWPL Northern Division title favourites, Blackburn Rovers, closed in on the top two when hitting neighbours Fylde for six, while Wolves came away from Derby County with a point. Blackburn are now two points short […]