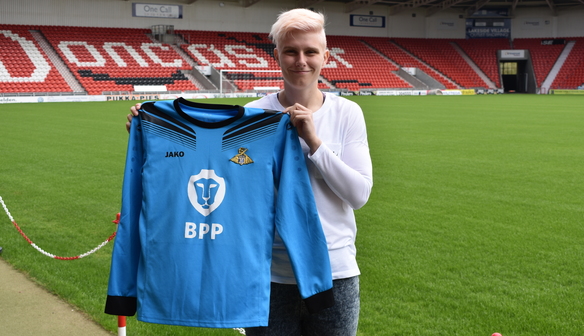 Draycott joins from Doncaster’s local WSL 2 rivals Sheffield FC, after impressing manager Emma Coates with her performances against the Belles in the 2017 Spring Series.

The former Belles Junior, who also has WSL experience with Notts County, told doncasterroversbelles.co.uk: “I’m delighted to get the move sorted and can now concentrate on pushing towards WSL 1 with the Belles.

“This club and everything that comes with it is one of the best in WSL 2, so the chance for more training and personal development will help me become a better goalkeeper.”

On the signing, Coates says Draycott is just the player she wanted to bring in.

She said: “I’ve been looking to form a really strong goalkeepers union here so Jules will come in and provide more competition for Nicky [Davies].

“We know what we’re getting with Jules. She’s a consistent performer and working with Nicky I hope they can bring each other on further.”

Meanwhile, another Doncaster keeper, Nicola Hobbs, has left the club by mutual consent.

The 30-year-old has enjoyed two spells at the club between 2008 and 2017 and was an integral part of the Belles’ 2015 promotion winning side, as well as representing the Belles in their last cup final appearance in 2009.

Three first-half strikes were enough to see Doncaster Rovers Belles beat Watford 3-1 and remain unbeaten in the FA Women’s Super League 2. Goals from Jess Sigsworth, Sam Tierney and Maz Pachaco were too much […]