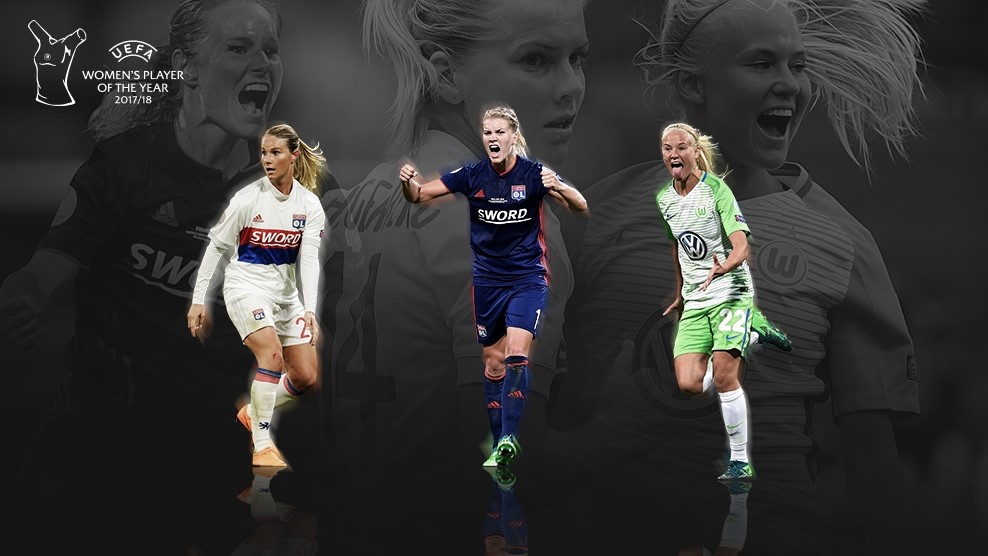 On Thursday (30th August), as part of the UEFA Champions League group stage draw ceremony in Monaco, UEFA will present their Women’s and Men’s 2017/18 Player of the Year awards.

The nominees for the awards were announced last week but how were they decided?
For the women’s award, the shortlist of three players was selected by a jury composed of the coaches ofthe 12 highest-ranked teams in the latest UEFA women’s national team rankings, together with the coaches of the eight clubs which participated in the quarter-finals of the 2017/18 UEFA Women’s Champions League. Twenty journalists specialised in women’s football and selected by the ESM group are also part of the jury.

Coaches and journalists were requested to select a shortlist of three players by allocating respectively five points, three points and one point to each of them. The final result was based on the total number of votes cast by the coaches and the journalists. The coaches were not allowed to vote for players from their own team.

Given that there were no major international tournaments this past calendar year, inevitably performances in Europe’s top club competition have been foremost in the mind of those voting (perhaps overshadowing domestic league/cup and national team performances), with only two players that did not feature in the 2017/18 UWCL Final making the long list of ten.

The rest of the top ten

For the men’s award, the shortlist of three players was selected in a similar fashion, this time by a jury composed of 80 coaches of the clubs which participated in the group stages of the 2017/18 UEFA Champions League and UEFA Europa League, together with 55 journalists selected by the European Sports Media (ESM) group, representingeach of UEFA’s member associations.

Pernille Harder has been named UEFA Women’s Player of the Year 2017/18 at a ceremony, which took place on Thursday during the 2018/19 UEFA Champions League group stage draw in Monaco. The VfL Wolfsburg and […]

The Lionesses’ Lucy Bronze has been named the UEFA Women’s Player of the Year, the first ever English winner of the award. In a vote by top coaches and journalists in the women’s game, Bronze […]

Pernille Harder was named as UEFA Women’s Player of the Year 2019/20 at a ceremony in Geneva. The Danish striker wins this award for the second time after 2018. The former VfL Wolfsburg and current […]