February was LGBTQ+ History Month which gave footballers from Lewes FC the perfect opportunity to use their platform to create awareness and raise over £1,500 for a local charity.

Ellie Leek, Rhian Cleverly, Paula Howells, Katie Rood, Zahra Cheeseman, Ellie Noble and club volunteer Hannah Tappenden teamed up with local Brighton charity, MindOut, to organize a virtual bingo night on 27 February, attracting over 70 people (or in Bingo lingo – ‘three score and ten’)! It was all to play for, with big prizes up for grabs including Ms. Monopoly, Lewes FC caps and even a pair of Kappa shoes.

They raised a grand total of £1,562 and a representative from MindOut said ‘We are really grateful to Lewes FC for the excellent fundraising. All monies donated to MindOut go towards our life saving, life changing mental health support for LGBTQ communities.’

The night was jam-packed full of entertainment and described by Lewes skipper Cleverly as ‘organised chaos!’ A global pandemic and Zoom did not deter people from showing off their fancy dress wardrobes, with the likes of Lewes FC club shop owner Barry Haffenden dressing up as a fairy and midfielder Paula Howells as a more convincing Boy George.  As well as fun and games, the night brought much needed attention to an issue that both Lewes FC and MindOut are committed to championing within the community.

Team GB and Wales Hockey players Sarah Jones and Leah Wilkinson provided some insight into their personal story, and writer, speaker, broadcaster, and diversity champion Dr Sophie Cook told a powerful story of the importance of being truly authentic to who we are and want to be, regardless of sexuality. 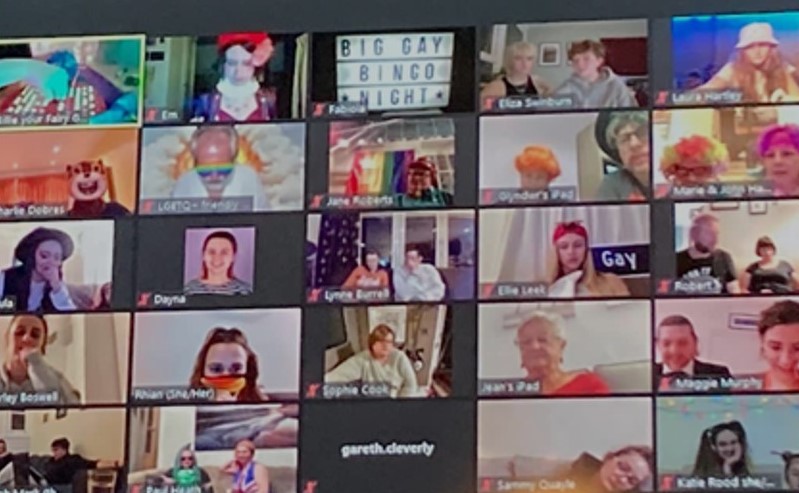 Co-organiser Howells said, ‘It’s important to take any chance we can to celebrate LGBTQ+ and remember that we would not be in the position we are now without key activists paving the way and creating a world where it is acceptable to be whoever you want to be. Those people should be remembered and celebrated for the happiness they have helped create in so many peoples’ lives.’

Cleverly, captain of Lewes FC Women, said, ‘What started off with a small in-team chat developed to an event for the whole Lewes FC community with 70+ people attending from as far away reaching as the US. For me, the event was extra special because it supported Mind Out and the LGBT+ community which includes my best friends and family members. It’s so important that we listen, learn, and understand the struggles and strengths of their experiences to make it easier for others in the future. As always I’m really proud of the team for organizing such a successful event and being part of this special club.’

Lewes Co-Director Karen Dobres added: ‘It’s wonderful that our players are championing such a great charity and having fun in the process. To be honest I’d expect nothing less of the first female footballers in the world to be valued equally to the men – after all, empowered women empower others!’