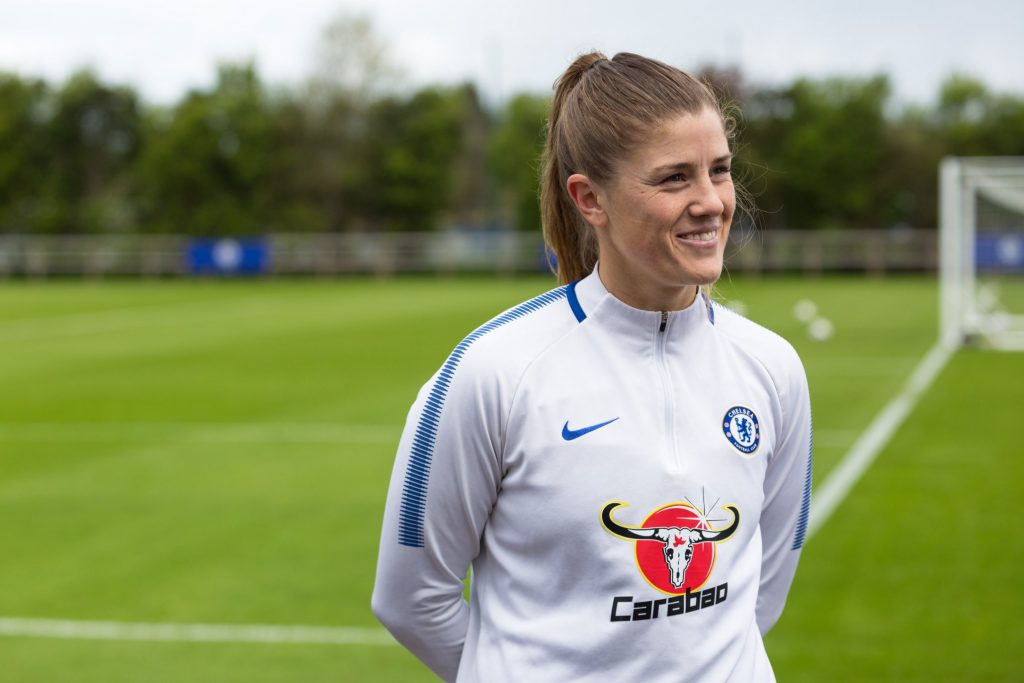 Having aspired to this occasion as a girl kicking a ball around the pitches of Bergen, Maren Mjelde will finally get the chance to live out a lifelong ambition and play in the SSE Women’s FA Cup final.

The 28-year-old Norwegian joined Chelsea late in 2016 and was part of the team that lost to Birmingham City in last year’s semi-final.

But she now has the opportunity to walk out on the hallowed Wembley turf after the Blues beat holders Manchester City in the recent semi-finals to set up a showpiece clash with 14-time winners Arsenal.

And Mjelde hopes the presence of her family can spur her on to victory.

“I’m really looking forward to the final. It will be my first cup final in England and I’ve heard so many cool things about it,” she said.

“Playing at Wembley is a Norwegian’s dream and I will have my whole family coming over also, so it will hopefully be a great occasion.

“It’s something you aspire to do when you’re playing as a girl in Norway. There’s also a good tradition in Norway of cup finals so I can just imagine that it’s even bigger here and I’m really looking forward to it.

“It would mean a lot to win the cup. I came to Chelsea to win things and this year we’ve been doing really well.

“I feel I always perform best when my family are there, so it will be good.

“They wouldn’t miss the opportunity to see me play at Wembley. It’ll be a big moment for me, but also for them.”

SSE Women’s FA Cup final opponents Arsenal have won the competition a record 14 times – most recently in 2016 with that 1-0 victory over Chelsea – but the Blues have faced them twice in the league this season and have yet to taste defeat.

And with Chelsea also riding high at the top of the FA Women’s Super League, Mjelde is confident her side can banish the memories of the last time Chelsea made the final – losing 1-0 to Arsenal in 2016.

“We all want to win. The girls who played that one want to beat Arsenal and those of us who have never played a cup final want to win too.

“It’s going to be tough but we believe that we can do it and it will be good to see Chelsea on top in the cup final.”

Mjelde was one of a hat-trick of Chelsea players who blocked out the top three positions in the voting for the Professional Footballers’ Association (PFA) player of the year award.

And with five Chelsea players in the PFA team of the year she is determined to see the side end the season with at least one trophy to their name.

“There is still a month left, we’ve got the cup final but we’ve still at the top of the league too, so hopefully at the end of the season we’ll have the double – that’s the dream,” she concluded.

“We had a lot in the team of the year, so it just shows how good of a season we’ve had so far – but there’s still a month to go though so we can’t really think about that.

“This month is the most important month.”