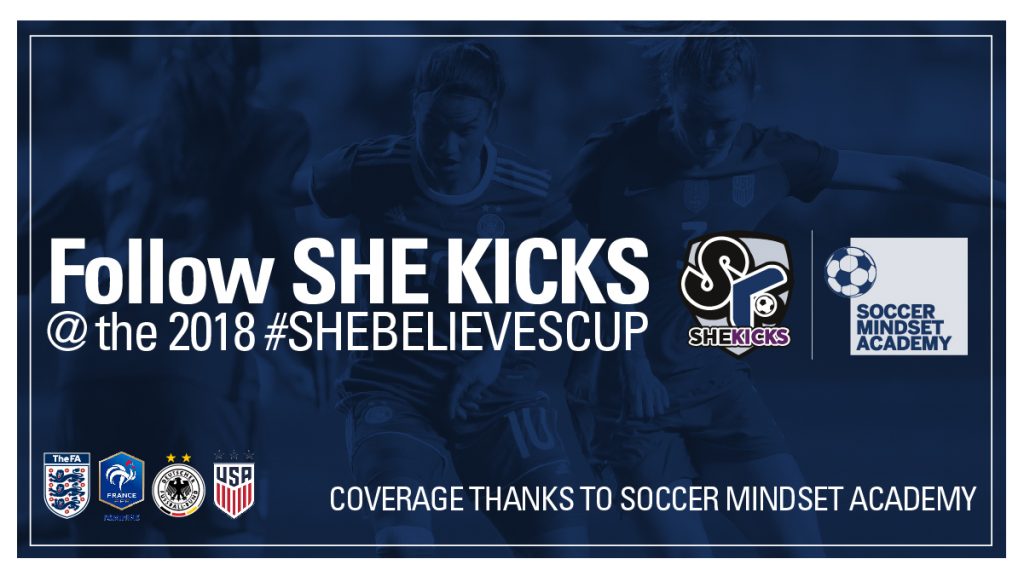 Are you excited about the international action coming up?

We are, and we’re also delighted to have teamed up with Soccer Mindset Academy for our coverage of the 2018 SheBelieves Cup.

New Lionesses coach Phil Neville will take his squad to three venues across North America to face France, Olympic Champions Germany and the hosts and World Cup holders USA. Since he took the role he has talked passionately about expectation and pressure, of mental strength and wanting to be winners and this will be a fascinating early test of the group’s qualities against some of the world’s top teams, with the world cup in France 2019 dominating the distant horizon.

Once again we will bring you interviews, reaction and general insights into the atmosphere and experience of this elite, invitational, four-team tournament here at www.shekicks.net and across social media. With the BBC broadcasting all three of England’s matches live, we are also offering fans the opportunity to vote for their #Lionesses Player of the Match in each game and win merchandise from the tournament.

“She Kicks has been inspiring girls and women for more than 20 years, promoting positive role models and stories through its pioneering magazine, website and social media outlets,” says Yalcin Bekar, Founder and CEO of Soccer Mindset Academy.
“Soccer Mindset Academy’s (SMA) quest is to inspire soccer players to become the best they can be through its revolutionary, online mental skills program – Soccer Mindset Pro.
“SMA is therefore proud to team up with She Kicks to sponsor their coverage of the SheBelieves Cup to help us all achieve our common goal.”