Sarina Wiegman has named a 24-player England squad to face the world champions United States and Czech Republic next month.

UEFA Women’s EURO winners Fran Kirby and Chloe Kelly are back in the fold after missing last month’s final FIFA World Cup qualifiers through injury, while there are first senior call-ups for West Ham United’s Lucy Parker and Jessica Park who is on loan at Everton. Manchester City’s Esme Morgan – yet to make her senior international debut – returns to the squad following her call-up in September 2021, which she missed due to injury.

The Lionesses are returning to two venues that were the backdrop for major moments in the summer success. Firstly, the US will be welcomed to a sold-out Wembley Stadium connected by EE, scene of the memorable July final when a 2-1 victory against Germany clinched the trophy, on Friday 7 October.

Then, the Czechs will travel to Brighton and Hove Albion on Tuesday 11 October, with England having played two significant EURO matches at the south-coast stadium – winning 8-0 against Norway in the group stage and defeating Spain 2-1 after extra time in the quarter-finals.

Sarina Wiegman said: “Our focus is now firmly on the FIFA Women’s World Cup next summer, all of our time together is vitally important and this is an opportunity for those selected to apply themselves to the best of their ability on and off the pitch.

“The challenge of facing the world champions is one we look forward to and it is another tough fixture to measure our progress as we look to continue to make the next step forward.

“We are so excited to be able to go back to Wembley after our incredible experience in July.

“It will be a special evening and a great celebration for our fans, but we also know it will be a challenging game against very strong opposition.

“We are working hard towards next summer and this will help us understand where we are in our preparation.

“It would also be wrong to underestimate how good the Czech team is with our next match. We saw them draw 0-0 away to the US earlier this year and they also drew twice with the Netherlands in World Cup qualifying.

“As it will be at Wembley, we want to be able to say ‘thank you’ to the fans at Brighton. They were such a special part of what we all achieved and we will always have good memories of the stadium. They created a brilliant atmosphere
that helped inspire us on the pitch.”

The US date has an extra significance with The FA marking 50 years since the first-ever Lionesses match on 18 November 1972.

More than one hundred former players from across the years are expected to be in attendance as guests of The FA while many of those who appeared in that maiden match, a 3-2 win away to Scotland, will be involved in the pre-game ceremony. 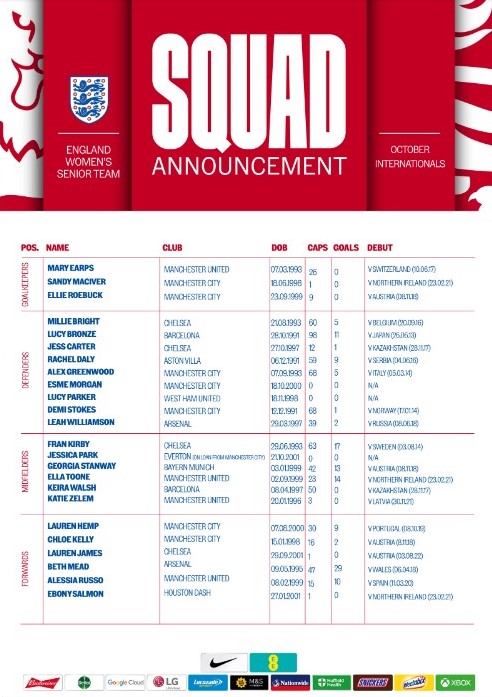 #FIFAWWC2019: Karen Carney on her ‘bubble’, her family and literally living the dream

Cool. Calm. Collected. 31-year-old Karen Carney takes her seat in the middle of a sea of journalists, a scene increasingly familiar to a player appearing at her fourth World Cup writes SAM WARD (Uni of […]

England’s new head coach Sarina Wiegman has named a 25-player squad for the Lionesses’ 2023 World Cup qualifying campaign which kicks-off in September. Wiegman’s England are targeting qualification for the World Cup in Australia and […]