Tickets for children and concessions are priced at just £1 each.  An early bird adult ticket offer is available, priced £7.50, until Monday 25 September (full priced ticket is £10).

England last played Bosnia & Herzegovina in their Euro 2017 qualifying campaign, beating them 1-0 in both games.  It will be the first time the Lionesses have faced Kazakhstan.

England centurion Casey Stoney scored in the Lionesses’ last visit to Walsall, when they beat Croatia 3-0 in 2012.

Stoney said: “These games will be really important in setting the tone for our World Cup qualification campaign and we’ll be absolutely determined to get two good wins in front of our own fans.

“I’m particularly looking forward to playing in Colchester. I come from Basildon so it’s great to have a game in Essex.

“We really enjoy taking our games around the country and giving as many people as possible the chance to come and watch us.

“We have had such fantastic support so far during the Euros and hopefully we’ll have two big crowds at both games.” 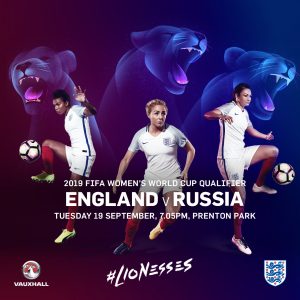 Tickets for ALL games can be bought via www.TheFA.com/Tickets.