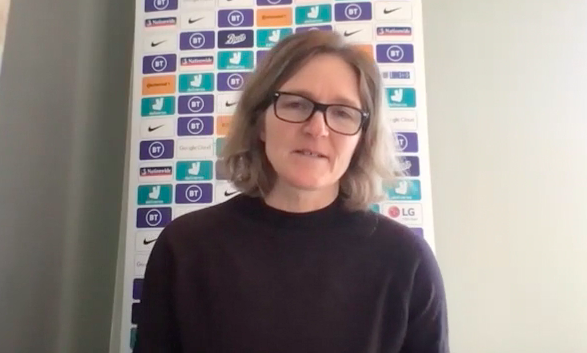 New England women’s national team ‘acting’ Head Coach Hege Riise announced her 20-player squad for the upcoming camp and Northern Ireland friendly on the morning of Tuesday, 9th Feb and then fired straight into a virtual press conference with the gathered media.

Softly spoken, polite and thoughtful, Riise is hugely-respected for her ability and achievements as a player (both at club level in her native Norway, in the USA, as well as a stint in Japan and for her country, including winning all three major international titles between 1993 and 2000). For those of us who watched and reported on her, in her midfield pomp (and pronounced her name wrong when we first interviewed her in the Algarve in 1999!), she is 100% worthy of that ‘legend’ status.

Her coaching experience and credentials up to taking the interim role with England have been impressive too: firstly as an assistant to Pia Sundhage with the USWNT from 2009-2012 (winning Gold at London 2012), then as assistant and then Head Coach in an eight-year-spell with LSK Kvinner, picking up multiple league and cup titles in Norway and making headway in the Champions League.

Here she is saying, “Hei,” at the start of the call…

You will have picked up a lot of the chat through other reports, articles and coverage in the media, but here’s a quick run through some of the points discussed:

⚽ She hopes the players come to the camp relaxed and eager to show that they want to be a part of the squad, adding, “I believe the talent in this squad is amazing.” She wants players to show energy an enjoy the experience of playing for their country.

⚽ Riise is not aiming to make large changes to the playing style but smaller changes: “Looking at attacking and in-possession parts of their game and how they can score goals and create chances.”

⚽ The selection of the three, young, relatively inexperienced (for now) goalkeepers is largely down to: “the player report which shows they play week-in and week-out for their clubs,” and so having regular games is what matters, at this stage.

⚽ “If everything goes to plan, Jill Scott will get the cap against Northern Ireland. 150 caps is a major achievement.”

⚽ It will be almost a year since England last played a fixture but this should not be too much of an issue because of the FAWSL: “Thankfully the league has been running and with quality games every weekend.”

⚽ Two of the main names missing from the squad were Nikita Parris and Beth Mead. It appears that Parris was included but Lyon did not want to release her due to the quarantine issues and this news was only received today. Another player could be called up to make a 21-player squad. While Riise was quite candid (sometimes it’s difficult to say if it is brutal honesty or simply a language issue when comments like this are made) about Mead’s omission, explaining that the ‘player report hasn’t been that great’  and the narrowing of squad numbers meant she was out. However, she sympathised with the lack of regular games for Arsenal of late and emphasised that if Mead performs every weekend then we shall of course see her given another chance.

⚽ Riise and her assistant Rhian Wilkinson have been working well together and happily they already knew each other: “I know Rhian as a player, she played for me in Norway. I picked her up from Canada and with her we won the league title, so she made an impact on our team. I’m very comfortable that she will come in and be a good assistant to the coaching staff.”

⚽ Why did Riise decide it was time to leave club coaching and return working with national teams after so many years? “The whole last year I was thinking about maybe this is my last season. We won the league, won the cup, we played Barcelona in the quarter-final of the Champions League and so I felt liked I needed to do something else, have another role. That feeling kind of grew as the year went by and when this job came up in November and I thought, ‘this is something I would like to do.’ So, I’m happy with my decision!”

⚽ And finally, is she looking forward to working with Dawn Scott, Senior Women’s Physical Performance Manager, again, after their successful spell together with the UWSNT?
“Yeah, she sent me the text for the job!” revealed Hege, as she went on to explain that they have kept in touch since 2012. “I have been texting with her ever since the U.S. time and we had a great time there and it’s a good start here as well – so it’s fun to be back working with Dawn.”

Jayne Ludlow has named her squad for Wales’ upcoming FIFA Women’s World Cup Qualification decider against England, as well as signing a four-year contract extension. The squad for the sell-out game at Newport County FC […]

Phil Neville has named his England Women’s squad for the 2019 SheBelieves Cup in the United States which begins later this month. The 23-player squad will meet up in London this weekend before travelling to […]

Some tidbits from the Stadium of Light earlier today ahead of tomorrow’s World Cup qualifier v Austria, where England coach Sarina Wiegman and captain Millie Bright answered questions from attending broadcasters in the room and […]