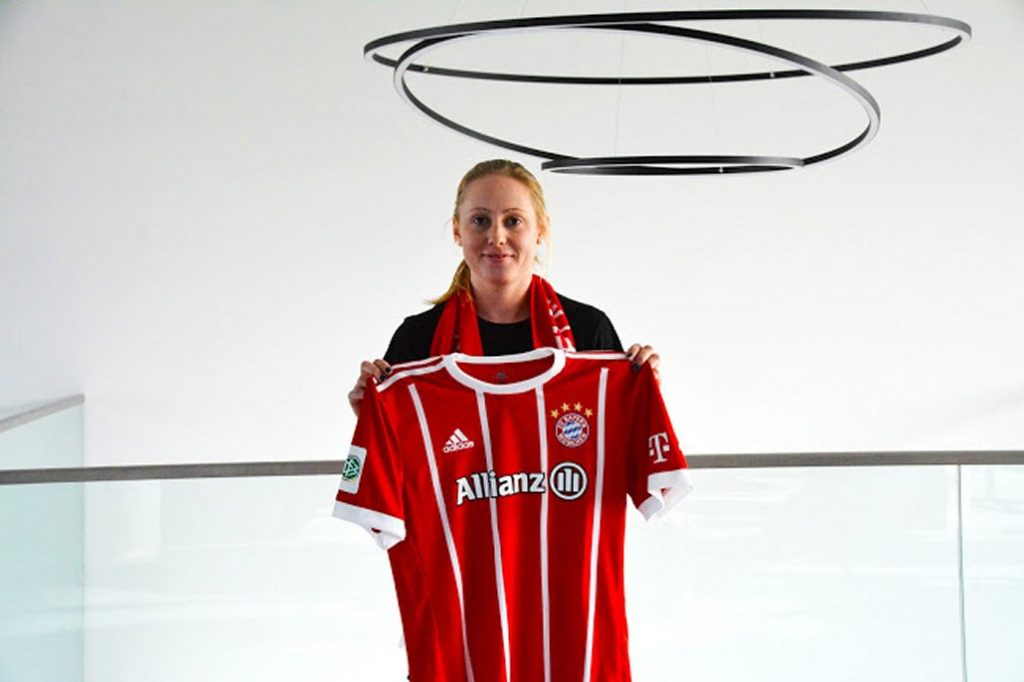 Leah Galton will become the first Englishwoman to play for FC Bayern Munich, whom she joins on 1st January 2018 on an 18-month contract.

FCB are currently in 2nd place in the Bundesliga and were knocked out of the Champions League by Chelsea on away goals in October.

Harrogate-born Galton (23) leaves Sky Blue FC in the NWSL after two seasons (where she was one of two English players playing in the 2017 NWSL season; Rachel Daly being the other) and previously played for 4 years with Hofstra University in the NCAA, having started her career with Leeds Ladies.

Galton had been called up to the England senior squad in September 2016, although didn’t attend due to injury but she has previously represented England up to U-23 level.

Leah Galton said on the move: “It’s a dream come true to join Bayern Munich and my biggest challenge yet. Coming here, seeing the facilities and meeting Thomas [Wörle] and his staff has given me a great feeling about joining the club and I can’t wait to work with them everyday to improve as a player. Bayern is built on a history of success, and I’m looking forward to doing everything I can to achieve total success with these girls.”

Thomas Wörle, Head Coach, FCB: “Leah is a talented, young player with room to continue developing. In Leah, I’m bringing a technically-capable, athletic and goal-scoring wing-back to our squad.”

Manchester United Women have confirmed that Leah Galton has suffered ankle ligament damage, sustained in the recent 3-0 derby defeat. Galton, who has netted six times in 18 appearances across all competitions in 2020/21, had […]

Leah Galton has agreed a new contract at Manchester United Women, keeping her at the club until the end of the 2020/21 season, with the option to extend for a further year. Galton has made […]

Manchester United Women’s Leah Galton has signed a new contract which will keep her at the club until June 2024, with the option to extend for a further year. The 26-year-old winger joined the club […]