England were dealt a late blow as Viviane Asseyi scored late to secure victory for France, handing Mo Marley a defeat in her first game in charge of the Lionesses, reports TheFA.com.

Goalkeeper Siobhan Chamberlain made two superb saves to deny the hosts in a friendly of few clear-cut chances, while the Lionesses also went close on several occasions in Valenciennes.

Lucy Bronze headed narrowly wide in the second half, while Jordan Nobbs and Jodie Taylor both went close for the Euro 2017 semi-finalists.

But their hard work was undone in the dying minutes as Asseyi was in the right place at the right time to nod in at the back post.

The last time the two sides met the stakes were significantly higher with Taylor netting the winner to send England through to the Euro 2017 semi-finals.

But France have consistently been one of the best teams in the world, making this a perfect test for England ahead of next month’s World Cup qualifiers against Bosnia-Herzegovina and Kazakhstan.

On the break, England looked dangerous with Karen Carney supplying Taylor with a fine cross mid-way through the first half but the Arsenal forward was crowded out just before getting a shot away. 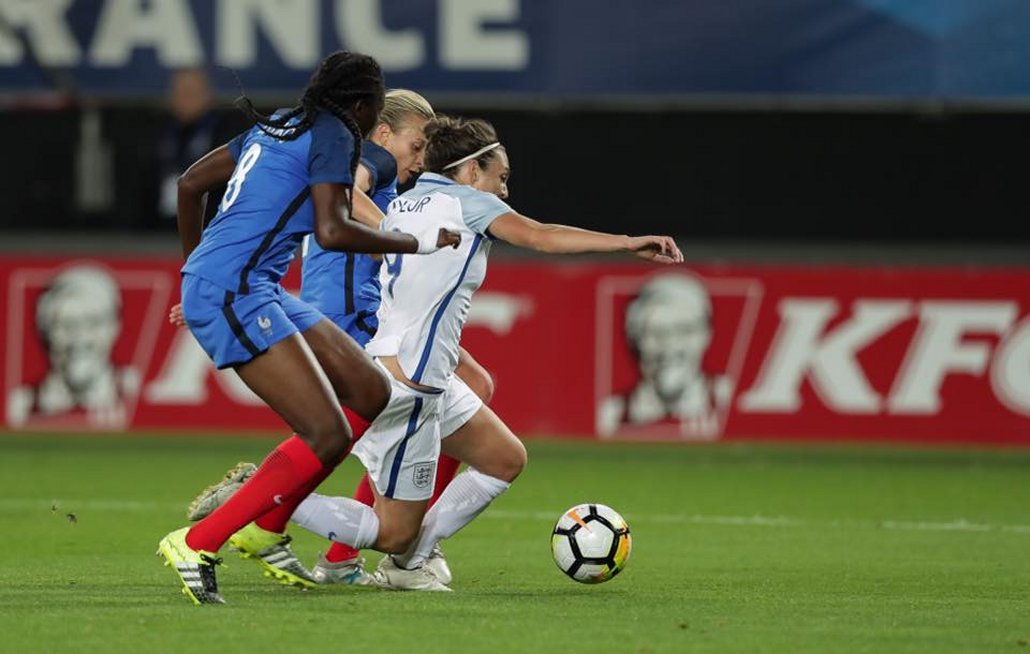 In a tight game, chances were few and far between but France had the best opportunity to score when Ines Jaurena picked out Valerie Gauvin but Chamberlain made a sublime save to tip her glancing header round the post.

Minutes after the break it was England’s turn to go close, with Bronze’s heading inches past the post from a corner but Chamberlain was called on again to keep out Eugenie Le Sommer’s rasping long-range effort.

Marley made her first changes shortly after, with Manchester City’s Melissa Lawley handed her Lionesses debut.

But France continued to push forwards and they won it late on as Viviane Asseyi headed home from close range.

Houghton almost salvaged a draw with a late free-kick but it sailed just over the bar.

Photos: Ben Queenborough for The FA.

IN CONVERSATION: A catch up with Lucy Bronze as she returns to #Lionesses camp for Germany friendly

Lucy Bronze, England’s most decorated female footballer, is back in England with Manchester City and back with the Lionesses for her first camp since December, reports GLENN MOORE. Injury ruled the 28-year-old out of the […]

With a member of the Lionesses’ backroom staff having tested positive for COVID-19, next week’s friendly in Germany has been postponed. The FA said in a statement: We have taken the difficult decision today to […]

Many regarded Manchester City left-back Demi Stokes as hugely unlucky to miss out on the FIFA Women’s World Cup 2015 squad that claimed Bronze in Canada four years ago. The 27-year-old, who grew up in […]