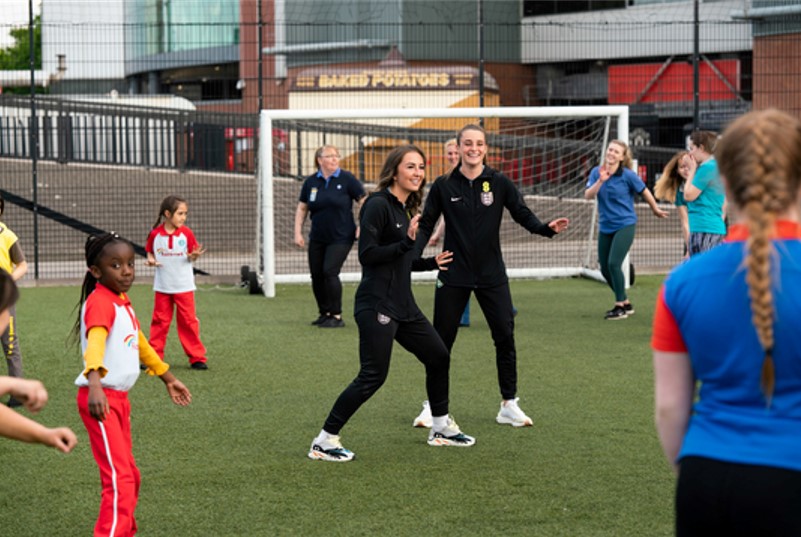 Girlguiding and UEFA Women’s EURO 2022 have teamed up to encourage more girls and young women to get involved in football.

The partnership is being announced ahead of this summer’s tournament and it is hoped the collaboration will excite and encourage girls and young women’s interest in football and reinforce the sport’s inclusivity.

Girlguiding members will also have the chance to commemorate the tournament with a brand-new badge, whether they watch a match or take part in the co-created football activities. Through the partnership, more than 5,000 Girlguiding members are planning to attend EURO matches across England this summer. Tickets are still available for matches at most venues. Prices start at £10 for adults and £5 for under 16s: www.uefa.com/womenseuro/ticketing.

To launch the partnership, Girlguiding members from 21st North East Manchester Rainbows, Brownies and Guides and the Greater Manchester Rangers joined England’s Women’s footballers, Katie Zelem and Ella Toone for a fun training session at Manchester United’s Old Trafford Stadium, which will host the opening game of UEFA Women’s EURO 2022 on 6 July. The girls had the opportunity to try out new football related activities co-created by Girlguiding and UEFA, before trying their hand at being a sports journalist during a girl-led press conference.

England midfielder Katie Zelem said: “Getting to meet all the Girlguiding members was incredible. They picked up the activities so quickly and we all had an amazing time on the pitch talking about the game. As a former Rainbow, myself, it’s fantastic to be involved in such an important partnership, one which I have no doubt will help inspire and build girls’ confidence in the game.” 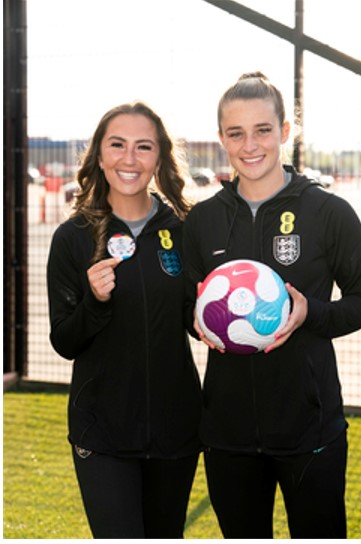 Teammate Ella Toone added: “I wish something similar had existed when I was younger, and I look forward to the tournament this summer knowing that Girlguiding members up and down the country will be cheering us on.”

Recent research commissioned by CHILDWISE found almost one third (32%) of girls aged 7-17 would like more opportunities to play football and more than half of girls (52%) have never watched football in a stadium, compared to 33% of boys.

The research also found 69% of girls would like to see women’s football celebrated more in the media and 71% of all children (boys and girls) think female footballers should be paid the same as male footballers1.

Girlguiding Advocate Caitlyn, 22, added: “Football is such a great sport, to play and to watch. I’m so excited Girlguiding and UEFA Women’s EURO 2022 have teamed up to help more girls to get involved. The co-created activities are a great way to introduce girls to the game and get across the important message that football is for everyone, not just for boys.”

“It will inspire long-term, sustainable positive change in women’s and girls’ football and we are delighted we have been able to team up with Girlguiding UK to support that change.

“Football is for all. We want to ensure whether its playing or watching, girls have the confidence to get involved and the opportunity to do so. We can’t wait to see Girlguiding members across England cheering on the teams at UEFA Women’s EURO 2022.”

France beat Belgium 2-1 at Rotherham to secure a quarter-final place and top spot in UEFA Women’s Euro 2022 Group D. Kadidiatou Diani took only six minutes or so to put France in front, heading […]

UEFA launched their very first game on Roblox today and She Kicks was given a glimpse of the experience before launch. We asked avid Roblox fan, Freya Gourley, 10 from Co. Durham to test it […]