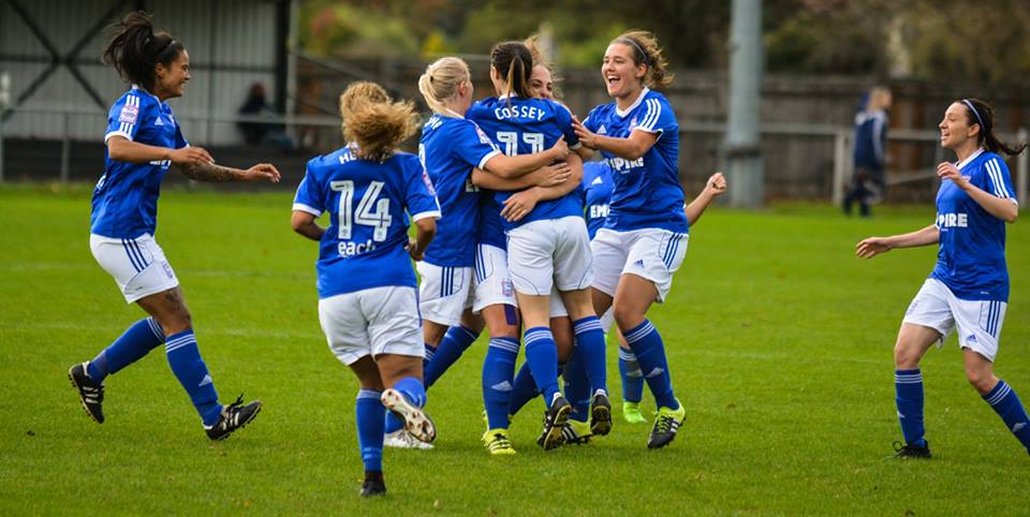 Blackburn went second in the Northern Division table with a 2-0 win over West Brom. Albion were denied by the woodwork either side of Natalie Fenton’s 35-yard free-kick goal for Rovers. It was into the last 10 minutes when Saffron Jordan spun to fire home the hosts’ second goal.

Leicester City WFC missed the chance to go top, losing out at home to Stoke City in a seven-goal thriller. Leigh Dugmore got the opener for Leicester but Hannah Keryakoplis and Rachel Ball scored to give Stoke a half-time lead. Sophie Domingo and Rosie Axten then hit back to see the game swing back in the hosts’ favour, only for Ashleigh Hayes to level and Kelsey Richardson make it 4-3 in added-time, after which there was a red card for Leicester’s Charlotte Greengrass.

Liverpool Feds dropped points for only the second time this season, when held 1-1 at Newcastle United in Northern Division 1. Both goals came in the first 10 minutes, Charlotte Gill firing Feds in front from distance before United equalised through Jess Foster.

Sheffield United leapfrogged TNS on goal difference, beating them 4-0 to go third in the Midlands. Natalie Shaw bagged a brace, Kim Brown and Tania Marsden got one goal each.

AFC Wimbledon got the only goal of the game at Cambridge United, to move four points clear at the South East summit.

Ipswich and Foxes cause Cup shocks

Derby County came from 2-0 down to take Bradford City to extra-time, before running out 5-2 winners. Ellie Olds and Ellie White scored for the Bantams, before Sophia Bonser pulled one back and Andi Bell hit a hat-trick, with Karagh Tait completing the scoring.

Coventry United were ahead after 11 minutes at Stevenage through Alison Hall but the underdogs restricted the visitors to one more goal. Hall won a 55th-minute penalty, which Helen Dermody put away.

Midlands Division 1 side Long Eaton held out to win 2-1 after extra-time at top-flight Wolves. Vikki Adam put United in front but Billie Haynes soon levelled on 40 minutes. Jade Arber netted a spectacular winner when volleying in from a throw in.

South East Division 1 Luton came through 4-3 in the added 30 minutes at Southern side Gillingham, letting a 3-1 lead slip before grabbing the winner. The Hatters hit first through Nicole Henman, with the Gills forcing extra-time with a Danielle Farmer penalty. Henman and McKay seemed to have the game won but the home side bounced back with a quickfire double from an Erica Byron own-goal and Kylie Manktelow, before Henman’s third goal sealed it.

Leeds United came from behind to edge Solihull Moors 3-2, scoring three times in a ten-minute spell. Tanya Dickinson netted from distance, with Rachel Stuart equalising on 73 minutes and also netting a penalty in United’s goal-rush, after which Abbie Taylor got Moors’ second goal.

Chorley also overcame a deficit at Barnsley, trailing to an Amy Woodruff effort at the interval, they scored three second-half goals to go through.

Brislington got the better of fellow South West side Cheltenham Town, winning 4-2 away.

Charlotte Fisher starred for Birmingham & West Midlands, scoring all their goals as they beat Sporting Khalsa 3-1.

Southampton Saints sent Larkhall to a 3-0 loss, Nicole Matthews, Alisha Buckingham and Libby O’Dell with a goal each.

Keynsham Town’s 4-0 result was their fourth win over St Nicholas this season, Katie Cooke getting a couple, Carly Bryant one, plus an own-goal.

Swindon Town turned a 2-0 interval advantage into a comfortable 7-1 success against Maidenhead. Annie Martin scored three times, Mia Mugford got a couple, Emily Arrell and Natalie Goodright one each, the latter with her first touch.