The 23-year-old joins on a one-year deal from Sky Blue FC subject to international clearance, having also played for Houston Dash.

Beckie represented the USA at two youth levels before switching allegiance to Canada, for whom she has gone on to make 43 senior appearances, scoring an impressive 22 goals.

She famously scored the fastest ever goal in Olympic history during the Rio 2016 tournament, taking only 20 seconds to find the net against Australia.

West Ham United have signed WSL-winning midfielder Kate Longhurst from Liverpool after a five-year stint on Merseyside. She once again links up with Matt Beard, having played under the head coach for the Reds and Chelsea.

“Ever since I can remember I’ve been obsessed with West Ham,” she told whufc.com. “I’ve been a season-ticket holder for as long as I can remember, and I feel at home already in this team. I’m a Hammer and I can’t wait to get going.”

“It’s the third time I’ve signed Kate now and I’m delighted to bring her to West Ham,” Beard said. “Kate is a great professional and she has played in the top level in England now for many years. She will bring experience and a bit of versatility.”

The 24-year-old came through the youth set-up at Leicester City before joining Arsenal and then moving on to Birmingham City in 2012.

After five years in the Midlands, Linnett then enjoyed a brief spell with Notts County before joining Reading in 2017, appearing 17 times.

She has been capped by England at four different youth age-groups, up to the U-23s.

Manager Neil Redfearn told liverpoolfc.com: “This is another great signing for the club. Kirsty will give us more options up front and I am confident that she can prove to be a really important addition to the squad.

The 31-year-old previously had four years with the Blades and also spent a similar time with Lincoln Ladies, after which she clocked up over 200 goals for Sheffield FC. 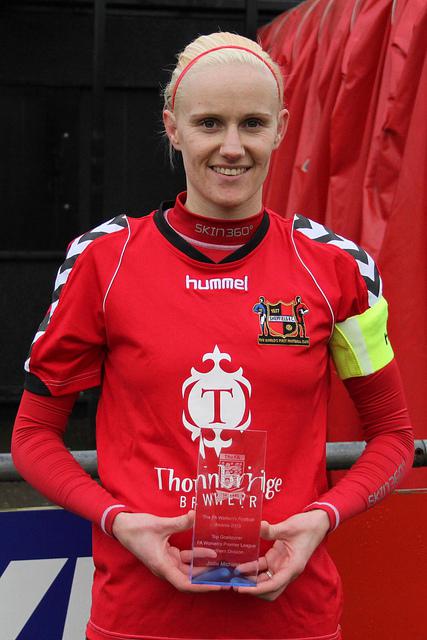 In 2013, she was the Top Goalscorer as well as the Players’ Player of the Year for the FAWPL Northern Division at the FA Women’s Football Awards.

Manager Carla Ward said: “It’s been a long and intense day and something that’s new to me but we’re now happy.  Jodie is a proven goal scorer so I’m delighted to get her over the line.”

Goalkeeper Fran Kitching, who only joined Sheffield United from Chelsea in the summer, has moved on to Liverpool and as part of that deal, England U-20 international Ellie Fletcher goes in the opposite direction on a season long loan.

The stopper came through the ranks at Hibs before following then-manager Willie Kirk to Bristol City in 2015.

An eighteen month stint in the South West saw Reid enjoy professional status and she helped the Vixens to clinch promotion back to the top flight.

Shortly after, Reid rejoined Hibernian where she has continued to excel – playing a vital part in the Hibbees recent Scottish League Cup triumph.

Former Arsenal midfielder, Brooke Nunn, signs up for London Bees after having been out of the game for a few years. Nunn won six trophies with the Gunners from 2010 to 2013 and was also included in their Champions League squad.

Ten-player Manchester City drew 2-2 away to Manchester United to end their losing run in the Barclays FA Women’s Super League. United keeper Mary Earps made a flying save to deny Janine Beckie And Maria […]

#FAWSL: Vote for Player of the Season

#FAWC: Blackburn Rovers Ladies off the mark with shock win