Sheffield United edged Durham 1-0 to climb to second place in The FA Women’s Championship, while Coventry United clinched a first win at this level.

A second-half Nadine Hanssen effort gave Aston Villa the win against Lewes and opened up a three-point lead at the top.

A frantic few moments saw both Hanssen and Marisa Ewers hit the woodowrk and Lewes’s Faye Baker keep out an Emma Follis’ effort with her feet.

Baker tipped over another Hanssen strike but her header from a Follis free-kick found the back of the net.

Sheffield United made a winning start at their new Chesterfield FC home, Aimee Palmer with the only goal against Durham to lift her side above non-playing London City Lionesses.

It was the Blades’ second win in four days over the Wildcats, taking the Conti Cup points 4-0 away in midweek.

Iris Achterhof would have given the visitors the lead in the second half but Becky Flaherty turned the ball over the bar.

Then came Palmer’s effort, finding the top corner from outside the area with 11 minutes to go. 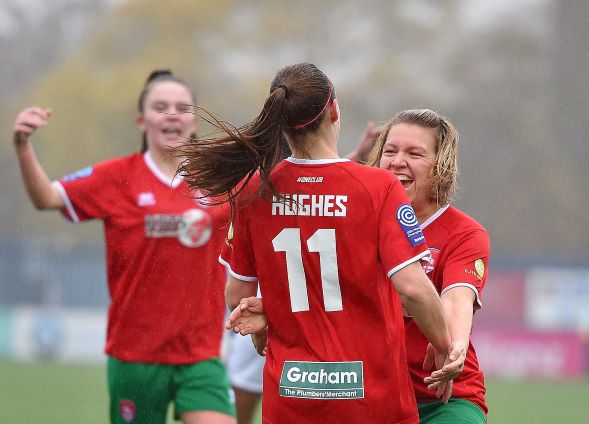 Amber Hughes’ double helped Coventry United to a first win. (Photo: Robin Parker for The FA)Coventry United’s first ever victory at this level came 3-1 away to Leicester City and after going a goal behind.

Leicester’s Lachante Paul hit a penalty onto the crossbar and the rebound over the top before Paige Bailey-Gayle ended a long sprint by squaring for Libby Smith to net.

Six minutes later, Hayley Crackle set up Amber Hughes to nod in the leveller, her second coming just before the break via a Shannon O’Brien pass.

Helen Dermody made sure of the win late on when getting on the end of a Katy Morris’ through ball.

Blackburn Rovers are within a point of seventh-placed Crystal Palace with two games still in hand after downing the Eagles 2-0.

Aoife Hurley might have had Palace ahead but her 20-yard strike hit the crossbar, while approaching half-time Natasha Flint played in Serena Fletcher to net from a tight angle.

Saffron Jordan’s shot was tipped onto the crossbar by the Eagles’ Emma Gibson but Flint hit the back of the net with a last-minute 25-yarder.

Ten-player Charlton Athletic slipped to the bottom but with a fourth draw in seven games at mid-table London Bees, where a last-gasp leveller prevented them claiming victory.

Charlton captain Grace Coombs was sent 0ff for pullng back Nikita Whinnett when through on goal but the Addicks thought they had pulled off a win when Charley Clifford headed home on 87 minutes.

However, Amelia Hazard had other ideas and rescued a point for the Bees from Merrick Will’s delivery.

#ContiCup: Blades and Gunners go top of their groups

Sheffield United have signed forward Sophie Haywood from Barclays Women’s Super League Aston Villa ahead of the 2022/23 season. The 26-year-old, formerly of Notts County, experienced promotion with Villa back in 2020 as her side […]

#FAWC: Charlton Women off the bottom with late leveller against Liverpool