The FSA and Kick it Out are inviting you to the Fans for Diversity Conference on 20th September, for an afternoon celebrating fans who make a difference in the game. So get the date in your diaries.

Bring your club colours, flags and scarves for the opportunity to meet with fellow supporters who want to make a difference, to welcome all to football, to share your ideas and show that no matter your faith, gender, background, sexual orientation or disability we can and should all be able to enjoy the game together. She Kicks Editor Jen O’Neill will be there too and would love to meet you.

The event will take place at Amnesty International UK’s headquarters at New Inn Yard, London, on Friday 20th September, and feature panel discussions and Q&As with leading figures from the football industry, as well as playing host to the first ever Fans for Diversity Awards. 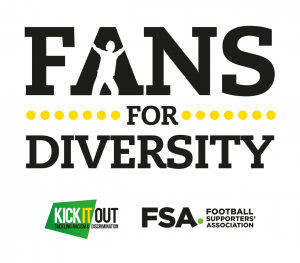 For the first time Fans for Diversity are creating a series of awards to recognise what fans are doing to share the joy of football to those who may fear it’s not for them and who go the extra mile to challenge perceptions and discrimination.

The awards are your chance to show your appreciation for the individuals and groups that have done outstanding work to celebrate and support diversity and inclusion in the game at every level throughout the pyramid, as well as – and this is where YOU come in – in the women’s game, in the 2018-19 season.

The FSA & Kick It Out are seeking nominations of individuals, groups or projects that you feel deserve some special recognition now – if you know someone who fits the bill, or you’ve benefitted from the efforts of other fans, simply fill in this quick form here.

DON’T BE SHY – it’s ok to nominate yourself if you’ve done work that you feel deserves a wider audience, be it starting a group, encouraging new supporters along to your local club, campaigns, events or creative use of social media.

Nominations close on 31st August with shortlisting taking place shortly afterwards. Those individuals or groups who are shortlisted for the awards will be notified in the first week of September to allow them to make arrangements to attend the awards, where possible.

FSA survey: Supporters say no to sexist behaviour at the match

Women are less willing to accept sexist behaviour at games, according to a new survey from the FSA which measured current attitudes against those of fans in 2014. The Women at the Match survey was […]

Jess Clarke joins Kick It Out as an ambassador

Liverpool forward Jess Clarke has been announced as an ambassador for Kick It Out, football’s equality and inclusion organisation. The 28-year-old will help endorse the messages of Kick It Out by providing support with events […]