We are going to carry blogs & mini diaries from fans, players & the SKs team and friends throughout #WEURO2017. Want to get involved? Get in touch! First up, meet VIKKI CHILDS.

It’s under a week before my flight to the Netherlands and I am beyond excited. I have never been out of the UK to watch football before but my expectations are high. 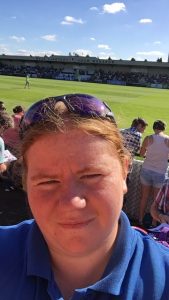 Before I go any further I better tell you a bit about me. So my name is Vic, you can find me on twitter @viksta87. I write a family and lifestyle blog and I am a super football nerd.  I’m an FA qualified coach and the Girls and Ladies development officer for a large grassroots club in Kent.

I’m looking forward to what the Women’s Euros 2017 has to offer, not just to the supporters that are there but the already building support which is already starting to build at home.  For me this year is bigger than ever, bigger than the support for the world cup in Canada. I’m excited about how the knock on effect can have an impact on the game at home. I’m hoping the intake of girls is reflected in this competition. England has a good chance of winning and that in itself is a great influence for the next gen of intake. Because of the Euros the FA have extended Girls football week to cover the tournament. This year it will run from 16th July until 6th August. Hopefully this will also help boost the next gen intake.

Over the last few days I’ve been wondering what to pack.  What do you pack?

Lets go for the obvious first. Clothes. I’m there for the group stages and then probably flying back if we progress past the semi’s so will be able to take my vast collection of England shirts home and get them washed before I head back.  Obviously I need to bring my MacBook too because how else am I going to keep you all up to date with the goings on! Do I take face paint and flags, other tacky fan stuff? I will also be taking a good book, and some gym clothes as our hotel has a gym.  Maybe a couple of smart going out tops and some shoes or boots to accompany my smart clothes.

I am looking forward to the whole experience. Its different to travelling within the UK to matches. The fan zone is set to be awesome and there are a small network of supporters like me travelling over as well, hopefully this will be a chance to make some more like-minded friends.

I will be speaking to fans outside matches (I’m going to try and get to as many as I can) to find out what women’s football and competitions like this mean to them.

Then that sparks the question,  what does football, and competitions like this mean to me? Well, I’m a mum of 4, leaving my kids at home with my wife to chase a sports team half way across Europe.  Not a day goes by when I’m not doing something football orientated, coaching, watching matches, scouting for players, organising competitions,  or sticking stickers into my Panini sticker book! The women’s game is particularly special to me because it represents freedom to be who I want to be, and to be accepted by those who are there for the same reason. Football is belonging. I love football, I live football. I aspire to be a part of the next generation of girls into the sport whether my input is tiny and they have attended just one of the many sessions I put on, or weather I’ve coached them for a while. I am proud of every single person I have coached and I am extremely proud of the visible development which has happened under my ideas, which seem crazy sometimes. Football was the first sport I participated in, it was where I went to take my mind off of being sad, and it was the first place I wanted to be when I was happy. Football is my in, when I needed to be a part of something, and Football is my out when I just need to get away. I know it is different for everybody, but football is my rock, even if its just me, as a 6 year old kicking a ball up against the wall of my house.

Competitions like the Euros and the World Cup mean so much to me. For me these things are about visibility. Visibility for women. Too long have men dominated sport, women are shunned and made fun of. For me these competitions show young girls that they can be anything they really want to be. The top level of football for women and girls is so accessible, as opposed to the men’s game. How many times could you bump into John Terry while out and about and him be super happy to be recognise for his sporting achievements, and be humbled to take a photo with you? I’ve bumped into top flight female footballers while out shopping with my family. They want girls to join the game and be awarded the opportunities. Women’s football to me is a huge community. It is a family and competitions like this bring us together.

Media coverage of the women’s game needs to be on a par to the men’s. If we had that much media backing we wouldn’t have WSL teams folding through financial issues, we would be generating a new fan base, and more cash to put into the game all the way from grassroots football to elite teams.

#ThrowbackThursday #tbt🔙📸 For just over a de