The Lionesses and Northern Ireland have previously met on eleven occasions, six of these being in the EURO Qualifiers but this will only be the second meeting in the FIFA Women’s World Cup Qualifiers, writes Rod Prescott.

England have won all eleven, scoring 60 goals in the process and conceded just three. All the programme covers shown are taken from our own complete England Women’s Programme Collection and each image contains its match details.

Missing though is England 5 Northern Ireland 1 from Sept 7th 1973, played at Bath City FC. In over 40 years we have never been able to establish if anything was printed for this game. 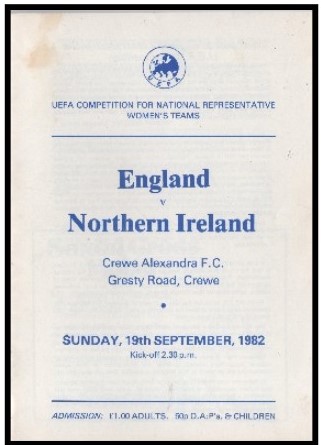 Kerry Davis who played for Crewe scored two, Linda Curl two , Janet Turner (who played for St Helens), Tracey Doe and Gillian Coultard all scored one goal. Gillian Totten – aged just 17 of Bangor Girls, County Down – would become one of only three Northern Ireland players to date to score past England.

Kerry Davis of Crewe Ladies continued her scoring versus Northern Ireland on 5 & 53 minutes, with Linda Curl (Lowestoft Ladies) 58 mins & Pat Chapman (Southampton) 86 with one goal each. England would win their group and go on to reach the two legged final versus Sweden.

3 – Meetings between Northern Ireland and England in the Euro Qualifiers would continue on May 25th 1985. 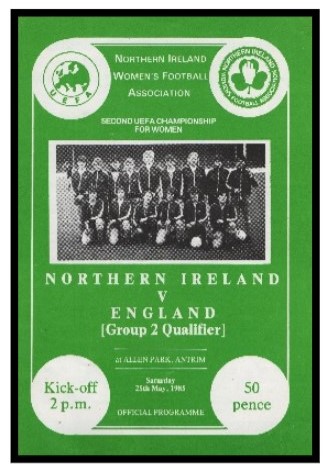 4 – The North West would again host the return Euro Qualifying Round meeting when the two teams met at Ewood Park, home of Blackburn Rovers, England winning 10-0 in March 1986.

Kerry Davis, who had now moved to play her football for Lazio in Italy, delighted the crowd with an impressive hat-trick, Linda Curl two, Hope Powell two, Jackie Slack , Jackie Sherrard and Gillian Coultard all scored one goal. 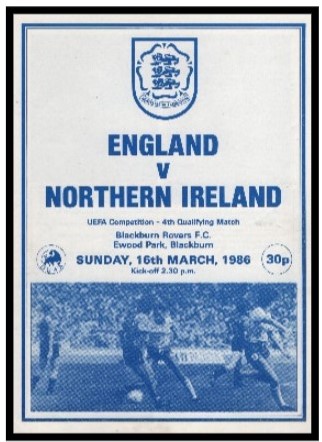 England ran out comfortable 6-0 winners with a Marieanne Spacey hat trick, plus one goal each from Linda Curl, Brenda Sempare and Hope Powell. 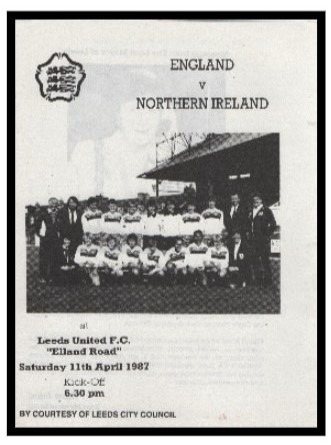 6 – The two nations would not meet again until competing in the Algarve Cup Group C Match in Paderne, Portugal on March 9th 2005.

England won the game 4-0 , the scorers being Vicky Exley (56 & 89) , Karen Carney (31) and Rachel McArthur (59). This lovely 40-page full colour programme was produced for this superb tournament. 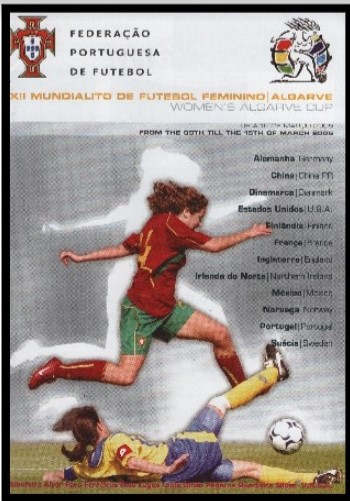 7 – Euro Qualifiers between the Lionesses and Northern Ireland returned during May 2007.

England ran out 4-0 winners at Gillingham FC, where Kelly Smith opened the scoring on 52 minutes. An unfortunate own-goal from Una Harkin (66), plus efforts by Katie Chapman (72) and Lianne Sanderson (76) completed the scoring in front of 3,944 spectators. 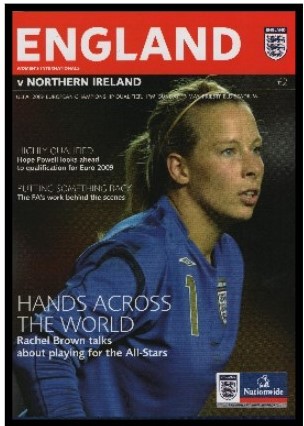 8 – The return Euro Qualifier at Mourneview Park, Lurgan played on March 6th 2008, resulted in a 2-0 victory for England.

Fara Williams (18) and Faye White (84) secured the points to help see England through to the 2009 Finals in Finland, where they would go all the way to the final. 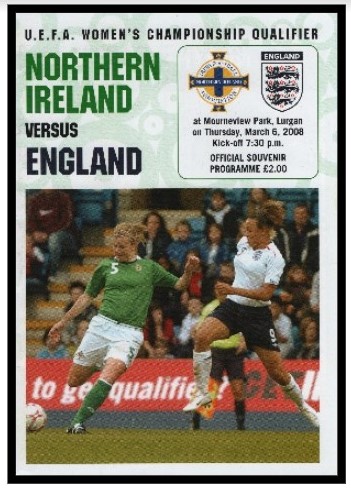 9 – The Covid-19 Pandemic would see England and Northern Ireland meet in a behind closed doors friendly on the Sir Bobby Charlton Pitch at St Georges Park on February 23rd 2021. 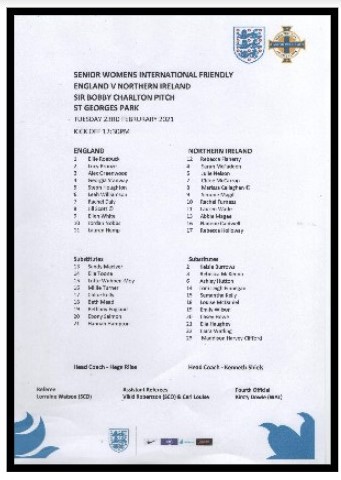 10 – Acquaintances were renewed on October 23rd 2021 when the two teams met at Wembley Stadium in front of 23,225 spectators, to contest a Group D FIFA Women’s World Cup Qualifier.

It would take a second half hat-trick from substitute Beth Mead to see of an excellent display from the visitors, placed at 46 in the FIFA Women’s rankings. Mead scored on 64, 74 and 78 mins, with Beth England adding to the tally on 72 mins to see England home with a final score of 4-0. However, Northern Ireland goalkeeper Jackie Burns of Glentoran was certainly our personal Player of the Match, pulling off some superb saves and in a fantastic overall performance.

Lionesses U-19 boss Mo Marley has today announced her retirement from The FA, bringing to an end a significant 25-year association with England as a player and head coach. Marley is one of The FA’s […]

England’s last game before UEFA Women’s Euro 2022 was a 4-0 victory in Switzerland, watched by a Swiss record crowd of around 11,000. Fran Kirby saw her early effort well saved by Seraina Friedli trailing […]

England were not quite able to rescue a point in their opening Women’s U-17 EURO round two qualifier against France in Poland. Ava Baker had a shot saved by Feerine Belhadj but France went ahead […]