England will step into the Women’s Under-19 European Championship finals in Ireland today aiming to out-do the seniors following last week’s Euro 17 semi-defeat by the host nation and eventual winners the Netherlands. 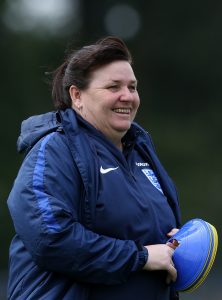 Mo Marley’s youngsters kick off their campaign with a game against Italy in Lurgan and then face the Netherlands in Belfast on Friday before finishing the group stage against holders France in Ballymena next Monday.

England last won the U19 Euros in 2009 and were beaten finalists four years later. So, in 2017, can long-standing coach Marley’s team lift the trophy in Ireland to keep the four-year sequence ticking along nicely?

“I don’t see why not,” said the former Everton coach when asked the question, though she quickly added, “but we have to be realistic – the main aim for us is to continue the development of the talent of the players.”

“The first priority is that these players need to be playing in the Under-20 World Cup next year – then we’ll look at what we’re producing, what we’re capable of, so it’s important that we get to that U20 World Cup.”

In order to qualify for the U20 World Cup, which is set to be played next August in France – the country that will also host the 2019 senior Women’s World Cup – England must reach at least the last four of this month’s U19 tournament.

And Marley’s players are confident of achieving their goal. Manchester City goalkeeper Ellie Roebuck said: “We wouldn’t be competing if we didn’t think we could do that – we all share those same beliefs and attitude.”

Doncaster Belles defender Maz Pacheco added: “We’ll take it one game at a time but it’s not only about doing well in the Euros, we want to qualify for the World Cup and make our mark there too – so it’s not just a one-tournament thing.”

England Fixtures in Group B

This is the first UEFA Finals featuring three home nations sides, with Scotland and the hosts N. Ireland also in action. More to follow on them.

Track the match, find out where to watch and all other news at the tournament website: http://www.uefa.com/womensunder19/index.html#/pg