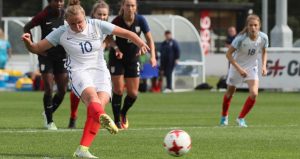 England continued their preparations for the UEFA U-19 Championship finals with a narrow defeat in a competitive warm-up match against USA at a sunny St. George’s Park on Wednesday.

Clinical USA led with goals either side of the break before Georgia Stanway’s penalty halved the deficit to set up an exciting finale in the first clash of a double-header between the two sides.

In warm weather, against an America team who started the match on the front foot, England found the going tough in the first half.

Despite being in pre-season and the fast start from the visitors, openings were few and far between early doors with the match springing into life 20 minutes in.

Jaelin Howell met an in-swinging free-kick for USA but could not make a firm connection before England’s Georgia Allen steered an effort off target following patient build-up.

The Young Lionesses grew in confidence but struggled to put the Stars and Stripes on the back foot, creating few clear-cut chances.

USA fashioned a decent opportunity midway through the first half, a corner fell to Tierna Davidson at the back post but Allen cleared the danger.

Against the run of play, Mo Marley’s outfit almost took the lead five minutes shy of the interval – Charlie Wellings with great control and vision to pick out Chloe Kelly, but goalkeeper Laurel Ivory intervened with a block.

USA were ahead at the break. Sandy MacIver saved well before Taylor Hinds was penalised for a foul in the box, with Civana Kuhlmann converting the resulting spot-kick.

They doubled their lead on 58 minutes, as Ashley Sanchez finished off a fine team move.

England responded well and grew into the game having gone two behind.

Substitute Alessia Russo was a threat on the right and won a penalty after a foul in the box. Stanway showed her cool from 12 yards.

With their tails up, the hosts rallied putting their opponents under sustained pressure but the Americans were able to see the game out and claim the win.

A penalty shoot-out followed the 90 minutes with USA edging out Marley’s side 8-6.